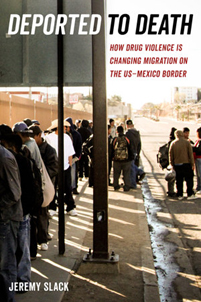 Deported to Death:  Should be read by Security Specialists interested TCO TTPs…

Unlike many University Press books, Jeremy Slack’s Deported to Death is informative, methodologically rigorous, and an entertaining read.  It is a masterful account based upon years of deep ethnographic fieldwork that will be of interest to those studying transnational criminal organizations (TCOs) given it supplies incredible detail on the modus operandi or tactics, techniques, and procedures (TTPs) of illicit networks from the perspective of their victims along the US-Mexico border.

The richness of Slack’s account is evident in the many tales and observations about the drug trade. It is common for organized crime to trick migrants into working for them and then force them to continue working for them under duress.  In one account, Slack describes a scam that took advantage of the emasculating nature of the economic deprivation of the border.  A young woman whose parents had bought two tickets with a smuggler to cross the border approached one of Slack’s research subjects a young male migrant known only as “Zacatecas.” She claimed she needed a man she could trust to go with her to prevent the smuggler from victimizing her.  Zacatecas refused, knowing it was a set-up to kidnap him for ransom or forcibly recruit him.  In this fashion even the organized crime scams, are carefully crafted to take advantage of the desire of young men to find self-worth in difficult situations (p. 165).  Slack’s research finding that organized crime often used trickery, is consistent with my own research on drug trafficking by Mexican organized crime in the United States.[1]

Slack hammers home the structural vulnerability of migrants and deportees throughout.  Central American migrants have no political constituency and thus organized crime can victimize them at will with little consequence.  On the other hand, Mexican society often views Deportees as criminals, an export of the criminalization of migrants by the US government.

Migrants must carefully guard personal information because nefarious actors could use that information to extort their families for ransom via virtual kidnappings where the caller pretends to have their family member using personal information and the reputation of violent organized crime groups to get compliance.  That fact makes migrants tight-lipped, about the most basic details of their lives.

Slack adeptly narrates the mechanisms of control organized crime groups use such as halcones or lookouts, to carefully monitor the border.  He even describes a run in with a potential smuggler who asked him an uncomfortable question and did not wait for a response (a sure sign of threat) (p. 66).  After moving research sites, one of his research subjects tells Slack a man has followed him, and he should leave.

Slack uses interviews to bring to life the complex milieu of migration and organized crime along the border.  He describes the TTPs of burreros (Backpacking smugglers) and their organized crime procedures designed to compartmentalize operations and prevent the Burreros from running off with the drugs.  He also describes the danger of the bajadores (rip-crews) who wait in the desert to steal the illicit cargo.  In the Sonora desert the burrerros are such an integral part of the community, that they can go on strike against the organized crime groups that control the drug trade to force their employers to pay the back-pay owed them for past unpaid trips (pp. 50-53).

The on the ground look reveals surprising details for people who have not studied the drug war in Mexico.  Migrants are subject to kidnappings by police who examine their Federal Election Cards (standard ID in Mexico), which identify where the migrant is born.  The police take those born in cartel warzones like Michoacán away, never to be heard from again (p. 27).  The police regularly prey upon the migrants after they are deported or around wire transfer sites, trapping the migrants inside shelters.  Slack also includes accounts from his migrant shelter field work related to him by migrants of the police providing cover for cartels and smugglers by pretending to show up to investigate and telling their cartel counter parts to keep things quieter.

One of the most disturbing tales is that of Juanito, a young man who the Zetas forcibly recruited, and admits to having worked removing organs from the bodies of children under duress.  The psychological damage or “moral injury,” defined by Jonathan Shay as being forced to commit violence that breaks the moral code, norms, and values of society, breaks the victim from society and binds them to the group.  Eventually Juanito gets himself into a smuggling position and turns himself over to the border patrol resulting in his deportation (p. 97).

Slack eloquently describes the often-byzantine US immigration system and the types of relief immigrants can seek in it including political asylum, withholding of removal and protection under the Convention Against Torture.  He introduces the concept of necroliberalism which he attributes to an anonymous manuscript reviewer to describe how liberal regimes decide who lives and who dies in immigration courts.  He quotes a Dana Leigh, a judge in the Ninth Circuit Court of Appeals, who describes the immigration court system as “death penalty cases in traffic court settings” (p. 14). Being a fan of the Netflix show Stranger Things, I describe the immigration system as “The upside down” to strike the point home for my students.  Slack succinctly hammers the notion in this line: “In immigration court people are not guaranteed the right to counsel, there is no jury, and the burden of proof is on the person, not the state“ (p. 174). In short, it is like a photo negative of the US Criminal Justice system and common-sense notions of American due process.

There is little to critique in this book as it draws not only on ethnographic fieldwork but also quantitative study results.  As a fellow researcher my only peccadillo with the book was, I found myself flipping pages often checking citations to a get sense of events in space and time.  One area for future research would be to discuss how this research applies to the interior of Mexico and especially southern Mexico.  This is an important question in immigration courts given the legal standard of internal relocation, i.e., the courts are interested in knowing if a person can be safe anywhere in the country of origin not just in their home state or city.  Thus, more research on violence against migrants and US deportees throughout Mexico would be a fertile area of much needed research.

This book would be useful in political science, migration studies, border security, sociology, anthropology, and homeland security courses at the graduate or undergraduate levels.  The appendix on conducting research in violent areas is particularly useful for social sciences graduate students embarking upon fieldwork in dangerous areas.