SWJ Book Review – Planning to Fail: The US Wars in Vietnam, Afghanistan, and Iraq

SWJ Book Review – Planning to Fail: The US Wars in Vietnam, Afghanistan, and Iraq 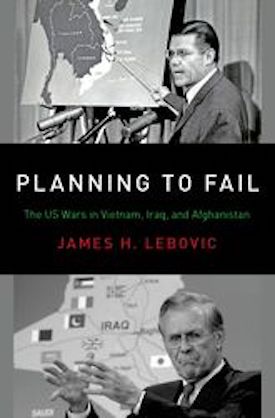 As we reel from the United States’ precipitous and messy withdrawal from Afghanistan, there is no better time to look back at the unsung works that predicted this possibility years prior and assess other lessons from those works. One such work is Lebovic’s Planning to Fail; a prescient practical/academic treatise on three of the United States’ great foreign policy blunders. I say prescient because it predicted many of the failures of the Afghanistan campaign and speaks to the pain and analysis, we all went through in August and September of 2021. Certainly, Biden bears blame at first blanche.  Then as we think back, we assign blame to Trump, to Obama, to Bush. Regardless of party, there was a structural rot to the foundation of the enterprise. Lebovic lays out exactly what that was, and in doing so, provides a framework of thought that if properly applied could help us to avoid the quagmires that have become features (not bugs) of US foreign policy interventions.

I met Professor James Lebovic of George Washington University as a doctoral candidate in 2009 at the University of California, Irvine where I was a discussant for a Spring 2009 Research in International Global Studies (RIGS) talk on his earlier book The Limits of US Military Capability: Lessons from Vietnam and Iraq.[1] The chapter we focused on was on the limitations of the United States to “leverage” host governments.  As a graduate student studying counterinsurgency (COIN) in the mid 2000s I found this example of the principal-agent problem helpful in my thinking on US COIN failures and successes. Full disclosure: I am thanked in the acknowledgements of his 2010 book. In 2019 Lebovic published Planning to Fail building off his earlier work.

Planning to Fail is a well-structured comparison of three cases: Vietnam, Iraq, and Afghanistan with summative Introduction and Conclusion chapters. This book is particularly well-suited for Small Wars Journal readers given their familiarity with the case studies which are the bread and butter of US COIN studies. The cases are analyzed with a unified structure assessing useful, but insufficient cognitive bias explanations in the literature, and Lebovic’s four phases which include: Stage 1: (The decision to intervene) with a ‘fixation’ on mission goals, stage 2: a ‘disjunction’ between the military means and ends, stage 3: ‘resource limitation’ or ‘constriction’ (the war has become expensive and spending caps are needed) and stage 4: disengagement of military forces (‘time constraints’ for exit).  In each case study chapter, he takes us through the insufficiency of other explanations, and through the four phases.  The chapters run long ranging from about 47 pages (Vietnam) to 62 pages (Afghanistan) with the middle Iraq chapter splitting the difference.  This weakness is at once exacerbated and mitigated by neat summaries of the overarching argument in the conclusion of each chapter, which allows the book to be skimmed by the pressed for time (doctoral students).

Lebovic argues, President Johnson could have taken any position on Vietnam and a plausible argument for rationality could have been made ex post facto. This clarity demonstrated the insufficiency of the rationality arguments explaining the US entry into Vietnam.

In ‘stage 1 fixation’ the Johnson administration fixated on military solution first by air (Operation Rolling Thunder) then by ground invasion. It failed to rigorously question its own goals focusing on the tactical over the strategic. In stage 2 ‘disjunction’ the Administration intended to use “bombing” for “coercive effect,” but the signaling was lost in the “noise” of “unintended messages sent by military and practical constraints on bombing.”(pp. 61-62) The administration limited bombing to avoid the entry of the Chinese or Soviets into the conflict.

In stage 3 limitation and constriction “Johnson ruled out a troop increase and an escalation or expansion of the conflict.” Johnson fixated on the “middle option” neither escalating nor withdrawing. In stage IV ‘extrication’ or ‘disengagement’ became the goal. Under the Nixon administration the war expanded, but for the purpose of a stronger US negotiating position, de-Americanization, and Vietnamization of the war effort. The goal of “peace with honor” was defined to fit the Nixon administration’s desire to leave the conflict. Saigon ultimately fell in 1975 as the South Vietnamese military and government with no US funding or support ultimately collapsed. “The neglected political dimension of the war would ultimately prove decisive.”(pp. 62-63)

In stage III resources were “constricted,” though Lebovic has some explaining to do in that this was the period of the troop surge 2007 and the pivot to counterinsurgency.  He describes this as actually consistent with the constriction phase because this was the “least costly option” and was small and “short term.”(p. 117) In stage 4, the Obama administration pushed a negotiating position on the status of forces that effectively guaranteed an exit in 2011. Lebovic rightly argues this was more about extricating the US from Iraq by pointing out that when the United States reentered Iraq later in combat against the Islamic State in Iraq and Syria (ISIS), the Iraqi government easily accepted the status of US forces not being judicially subject to Iraqi law.

Planning to Fail saves its longest substantive chapter for Afghanistan the most recent continuing US large scale intervention.  When I say that Lebovic’s work is prescient, consider that the following was published in 2019 and likely written well before that given academic timetables:

The risk, of course, was that Afghan Security forces, despite their infusions of funds would become a “work in regress.”  They could well disintegrate or collapse, perhaps in a slow yet accelerating downward spiral.  As security conditions deteriorated, all involved might fend for themselves—by cutting and running, grabbing what benefits they could, or making deals—allowing the Taliban to press its advantages. Pulling from its (now over two decades old) playbook, the Taliban could establish itself in the hospitable southern and eastern portions of the country and eventually move to envelop the rest.(p. 172)

Does that feel familiar given the events of 2021? I am interested in the “making deals” aspect of the fall.  Much has been said about “intelligence failure” on the fall, but the issue was not that the Afghan government and Army would fall as many predicted that, but how fast. One day we woke up and the head of Kabul’s police was working with the Taliban and as contemporaneous reporting argued, this could not have happened without advanced planning. This reminded me of my own research on Mexican drug trafficking organizations and how they take over new territories.  They send emissaries to meet with local cell leaders and get the locals to defect to the invading organization.[2] On the ground this has the effect of an overnight takeover with surprising speed and is reminiscent of the Sun Tzu quote “for to win one hundred victories in one hundred battles is not the acme of skill. To subdue the enemy without fighting is supreme excellence.”[3]

Lebovic’s Planning to Fail, provides eight recommendations that center on clear thinking about initiating interventions and the decision-making process. They include: 1) recognizing that “assessment is a continuous process;” 2) avoid ad hoc vague argumentation such as the US credibility argument in Vietnam; 3) get all of government on the same page, lest there be mission creep; 4) avoid “temporizing” delaying decisions can limit options; 5) “regularize” contingency planning for potential failure, 6) US must understand limitations including the ability to leverage host governments through support or threats of withdrawal, 7) reverse the decision making process by considering alterative futures; 8) “policy makers must remain wary of the non-decision.”(p. 192) This is a useful checklist for policy makers to evaluate foreign intervention decisions. Two of them have significant overlap (6) temporizing and (8) non-decision are both related to the timing of decision making and the desire to avoid painful decisions.  Recommendation 7 on considering alterative futures deserved a bit more fleshing out as there are many forecasting methodologies that could be recommended, though this might require its own treatise.[4] Lebovic’s Planning to Fail provides its readers with clear case studies, a useful four phase framework, and policy recommendations to address how policy makers approach these decisions.

Lives to have fun with…

Lives to have fun with friends, and not every student can afford a fun life due to a lot of homework, but the essay service on Grademiners helps me a lot, and it's insanely cool