Power Competition: The Struggle for Cooperation

Power Competition: The Struggle for Cooperation 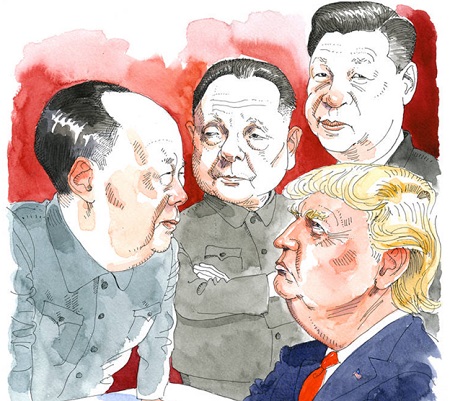 Donald Trump pictured with (from left) Mao Zedong, Deng Xiaoping and Xi Jinping. Drawing by Joe Ciardello for the WSJ.

The 2018 National Defense Strategy states that China is a strategic competitor and the United States must restore its competitive advantage in the international arena. However, power competition is more complicated now compared to the Cold War Era. Today, states are hyper-connected through technology and economic cooperation which increases complexity for projecting power. A good example is China’s use of economic power through its Belt and Road Initiative to expand its regional influence all over Euro-Asia.

During the Cold War Era, power competition was based on a bipolar system between the United States and the Soviet Union. With only two great powers during that era made competition simpler as both states developed their own unions to check military and economic power. Alliances like NATO and the Warsaw Pact were necessary to counter each other’s powers globally. This also allowed weaker states to deter military threats and increase trade between allies for economic benefits. What the Cold War Era taught us, is that cooperation between states is mutually beneficial and contributes to world order.

After the fall of the Soviet Union, the United States increased cooperation throughout Europe and Asia. This not only benefited countries like Germany and Japan but also contributed to China’s rise as a competing power to the United States. However, China’s rise to power is more complicated compared to the Cold War Era because of its aggressive economic strategy. The expansion of China’s economic ties with developing states has increased its influence globally.

Foreign policy expert and author, Anne-Marie Slaughter, in her book The Chess-Board & The Web, writes that China’s strategy “is to weave a global web of commercial and political relations…… in other words, a world of networks in which all roads lead to Beijing.” China understands that absolute power is multiplied by cooperating with other states. This cooperation contributes to an increase in trade and investment opportunities in areas that the United States has ignored. A lot of these opportunities include technologies and communication systems as seen with the current race for the 5G network. Additionally, the increased interdependence between states makes military conflict a high-risk option for everyone, including the United States. Over time, these economic ties will increase China’s influence over states countering competing powers without going to war.

To counter China’s global influence, the United States should focus on increasing cooperation with developing states. A balanced approach through diplomatic, economic, and military programs in these states would promote and protect U.S. interests abroad. Also, investing in development and security programs demonstrates U.S. commitment to partners and prevents them from aligning with competing powers.

However, over the past two decades, the United States actions and inactions abroad have damaged the country’s credibility. For example, the unilateral invasion of Iraq in 2003 and the removal of Gaddafi in Libya under the auspice of humanitarian intervention. Similarly, the recent withdrawals from the Iran Nuclear Deal and Trans-Pacific Partnership have contributed to the damaged credibility. In a recent Foreign Affairs article, the President of the Council on Foreign Relations, Richard Hass, stated that “doubts about U.S. reliability have multiplied…. thanks to its withdrawal from numerous international pacts and its conditional approach to once inviolable U.S. alliance commitments in Europe and Asia.” Hence, the United States must invest in these relationships and formal agreements to maintain its position in the world order. However, as this article was being written we witnessed massive budget cuts to the State Department and U.S. Agency for International Development which contributes to the perception of U.S. withdrawal from the world stage. 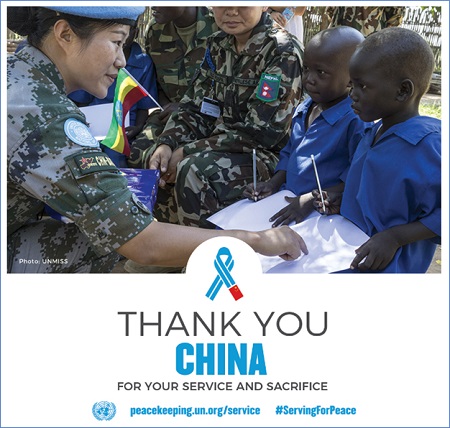 Meanwhile, China has taken a marketing approach towards power competition to establish a competitive advantage. They went “all in” with their economic power and have used their military power judiciously for defense and humanitarian missions. China has positioned itself in areas that the United States has ignored over the years, like Sudan, which increases their credibility with developing states. Additionally, China’s economic strength and minimal terms on agreements attract these states to do business with them.

Fortunately, being the dominant economic and military power in the world, the United States still has a competitive advantage. However, they must “step up” their international engagement strategy before losing its global influence to China. This would require an increase in diplomatic, economic, and military cooperation in areas vulnerable to China’s exploitation.

Robert J. Art, author and a member of the Council on Foreign Relations, wrote back in 1998 that:

“the United States cannot profitably coerce states to engage in free trade at the point of a gun, nor order them under threat of attack to cut back their generation of greenhouse gases. The coercive use of American military power for both of these purposes is a losing proposition and beyond America’s military might. Instead, a more indirect approach is called for”.

In closing, balancing against China’s rise to power requires sustained cooperation with allies and developing states using all elements of national power. Based on China’s actions over the past decade, they are hedging their bets through economic, development, and information activities to increase their standing on the global stage. China does not want to be the world police but does want to be the global economic power. For this reason, the United States must view power competition not just through a military lens to be competitive.