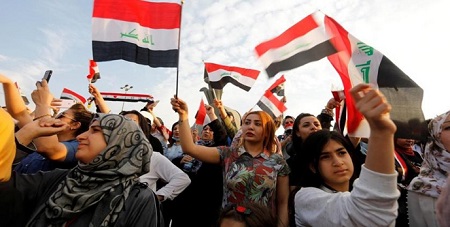 As cold weather blows into Iraq, it appears the fires of passion, energy and commitment to change will not be dampened after months of protests.  The protests are about the deteriorating situation in Iraq including lack of essential services, rampant corruption and high unemployment rates.   The government representatives elected in 2018, have tried a number of tactics to stop the protests, which continue into 2020.   Their demands are the same, they demand a complete overhaul of the current political system and politicians in their country to effect significant change.

However, no definitive action, new policies or programs have been created.   The reprisals continue against those protesting and reporting on the cathartic events happening everyday in various parts of Iraq.  Those governing continue to authorize the use of "excessive force” in spite of international pressure and condemnation of violence against the mostly peaceful protests.  Reports from Iraqi medical sources state as of December 2019, 19,000 have been wounded, over 500 people killed, 2,800 known arrests, internet access and social media platforms have deliberately been restricted.

Overt and covert influence by Iranian political and military leaders is evident within the Iraq government, political parties, proxies and militias who are supported by Iran. Quds Force operatives have been directly implicated in efforts to arm, train, and finance militias and insurgent groups in Iraq as well as targeting journalists and protesters.   The security issue internally in Iraq is related to the situation with neighboring countries-especially Iran and Syria.  Leaked cables, sent by Iran’s Ministry of Intelligence and Security between 2013 to 2015, revealed that many of Iraq’s top political, military, and security officials have had close relationships with Tehran for years.  In late October 2019, Iranian Major General Qassem Soleimani, head of the elite Quds Force, an arm of Iran’s Islamic Revolutionary Guard Corps that operates with impunity throughout Iraq, intervened to bolster Abdul-Mahdi and keep him in power.  By the end of November 2019, the pressure on Abdul-Mahdi was so intense even Iran could not continue to protect him. Iraq’s parliament accepted his resignation on November 30, 2019.

Prime Minister Adel Abdul -Mahdi stepped down however he still remains as a leader in “caretaker” status.  As of the end of January, 2020, Iraqi political parties have failed to come to terms and agree on an individual to replace him, increasing the possibility that the caretaker leader will be reinstated as Prime Minister, a PM supported and supportive of Iran.

On January 3, 2020 a missile killed Quds commander Qassem Soleimani and his chief deputy Abu Mahdi al-Muhandis while they were in Baghdad, Iraq.  It is important to note that Muhandis created the armed militia, Kataib Hezbollah (KH) and transformed the Shiite Popular Mobilization Units (PMU) into an “official force” to project Iranian power in Iraq and Syria.  Both men had been designated as “terrorists” for their actions against NATO Coalition and United States forces.  They were responsible for “death squads” and human rights violations in Syria, especially against the Christian population of Aleppo, and in Iraq.

Iraq has never recovered from “Operation Iraqi Freedom” which cost tens of thousands of Iraqi lives, trillions of US dollars and thousands of American and coalition lives. The war’s death toll rose to an estimated 176,000 to 189,000 and cost more than two trillion US dollars.

The blood price for “democracy and freedom” in Iraq continues to be steep.  For over a decade “civil society” and “capacity building” programs paid for with American dollars have yielded few sustainable results.

The “Special Inspector General for Iraqi Reconstruction” (SIGIR) reports celebrate the “peaceful elections, more women in government positions and keeping the country “together”, but concedes problems of corruption, infiltration of Iranian militias, lack of basic infrastructure in all areas, the huge growth of extremism resulting in the siege by Daesh/ISIS and the loss of “minority rights” .  These significant issues should cause policy makers to review and re-direct their strategies with respect to Iraq and Iran.

As Iraqi, Dr. Oula Kadhum, a Ph D candidate at the University of Warwick in the UK queries, and observed:

"Can we still call Iraq a state?  Power is dispersed along so many political actors, with varying domestic and foreign allegiances, that Iraqi sovereignty is but a mere illusion. There is no political system in Iraq but rather multiple systems (tribes, militias, political parties) with spheres of influence and power. The state has not been captured by an oligarchy but rather dismembered from within by corrupt elites and criminal gangs masquerading  as politicians."

Rather than being forced together under the umbrella ideology of “democracy” diverse communities within Iraq are asking for the chance for self-determination.  The greatest example of this was the referendum held in September of 2017, in the Kurdish Regional Government (KRG) section of Iraq.  This referendum calling for the separation of Kurdistan and supported by 93% of the voting population of the KRG, was proclaimed to be “illegal” by the Iraq government in Baghdad.  As a result, the KRG suffered serious economic and logistical repercussions including having their airport shut down to any international flights from September 2017 until the end of March 2018, and revenues from their region’s oil production channeled to Baghdad.

Security remains a serious concern for most of the country and for all tribes, ethnicities, religions and political parties.  After billions of US dollars, thousands of trainers and training hours, materials, weapons and personnel;  Iraq has not successfully been able to maintain security on its own, yet.  One has to ask why?   What  are the intentions and what is the incentive for the US government and private military companies to provide ‘back-up’ and ‘support’ for the Iraqi military?

The US State Department’s Bureau of Near Eastern Affairs plans to ask the White House Office of Management and Budget whether it can eliminate the $100 million request for the fiscal year of 2021, “due to current optics on the ground.”

The historical animosity and blood feuds between Shia and Sunni and between/within tribal communities, has continued to diminish Iraq’s power.  Healing Iraq, a society, fractured by tens of thousands of deaths and devastating destruction, is one of the toughest challenges facing the country.   Aid groups and western countries acknowledge the importance of suturing Iraq’s divisions, but few are willing to coordinate and support Bagdad with solutions to these problems.

There are many who would argue (within Iraq and the Middle East and within the USA and UK) that the aim of foreign policy of the western countries involved and of Iraq’s middle eastern neighbors, is to keep Iraq divided, feeble and dependent while her largest most lucrative resource-oil-is siphoned off and/or used for leverage.  Most of Iraq’s sectarian and ethnic leaders believe the US strategy in 2003 was indeed intended to be divisive.

Unlike citizens of the Gulf Arab states where the Gulf Cooperation Council (GCC) governments in the region share oil wealth with their citizens through a large and well-paid public sector and through very low prices for energy; Iraq’s citizens do not receive a share of the wealth.  Protesting in front of the world, in front of cameras, on video and social media is one of the only means most Iraqi citizens and specifically youth, with an unemployment rate of over 20%, can focus attention on their plight.  Official figures have been skewed since they do not measure those who have given up looking for work-in many cases years ago-but only measure those they know are actively “looking for work” as a percentage of their recorded labor force.  Like other “official Iraq government statistics” there is much skepticism over the accuracy of the numbers reported.

Humanitarian programs in the fields of education, health and job skill training are desperately needed in Iraq.  While military training programs budget could (and probably will) be cut, a Works Progress Administration (WPA) type program may be a viable solution for addressing endemic problems in Iraq, without the use of outside military and civilian contractors.

The WPA employed millions of American citizens to build sustainable infrastructure, learn skills and earn income for their family, savings and discretionary spending.  This type of temporary program implemented in Iraq, would cost less than building, arming and training (yet again) Iraq’s military.

Moreover, no nation can maintain its existence as any form of  “democracy” without an educated population and qualified leadership.  Instead of supporting training for the military and law enforcement, an allocation of funds could go toward partnership for teacher training, curriculum and materials development, counseling for those children affected by Daesh/ISIS indoctrination and those suffering from post-trauma reactions and victimization.  These projects could expand the horizon of adaptable systems for different communities within Iraq and encourage networks as well as exchanges for educators in other Arabic and English-speaking countries.   The United States could supply them with a first round of instruments of mass instruction in a range of subject areas, at a lesser cost and greater lifetime use than arms/weapons sales.

Iraq has millions of citizens who need a chance to participate meaningfully in their own destiny. They have been burdened by a war thrust upon them with refugees pouring into their lands and the challenge of internally displaced Iraqis from previous wars.  Kurds from Syria and Turkey who are in danger of attack from Turkish forces, are the latest wave of refugees from Syria due to Turkish military operations in the region. More than 13,000 people from Syria now live in Bardarash camp, in northern Iraq originally built in 2013 to accommodate Iraqis fleeing fighting in Mosul.  Unfortunately, Daesh/ISIS is not yet vanquished. Attacks by ISIS occur on a weekly basis causing many in the villages near the Kirkuk and Nineveh plains, to flee.

Instead of the United States continuing policies and programs left over from the Clinton/Bush and Obama administrations-which have not been effective or sustainable for the diverse communities of Iraq-a significant shift in thinking, funding and ways to implement support-are needed now more than ever.

Meanwhile, as Dr Lina Khatib, a Middle East and North Africa expert from Chatham House, says, “Iraqis have realized that all they are getting are new faces that just do the same thing as previous faces.”  She goes on to predict, “As long as the ruling elites of Iraq do not seriously address the real issues that the protesters are driven by, Iraq is going to continue to see waves of street mobilization and protests.”

Rabab Ibrahim, a 24-year-old dentist from Babylon, said recently: “We are not agents of any other country. We are Iraqis looking for Iraq’s interest. I think we should win the USA as an ally, for it takes and gives in return. Iran just sucked our blood.”

Joanne Patti Munisteri is an independent specialist, researcher and educator who has worked for universities, organizations and the US Department of State, DOD, USAID, IREX and private contracting companies in a number of countries including: Afghanistan, Ukraine, Pakistan, Armenia, Morocco, Russia, Malaysia, Saudi Arabia, Qatar, Bahrain, Italy, Australia, New Zealand, Ascension Island, Norway, Israel, Egypt, China, the United Arab Emirates and Kurdistan.  Joanne is also a TCM Health practitioner, mother and author.  She is a graduate of Georgetown University School of Foreign Service and Massey University, New Zealand.  Her articles have been published online and in print in the USA, Australia, New Zealand, Pakistan, Russia and Iraq-in English.  She is currently based in Iraq.

Adad Alan Shmuel was born in Mosul, Iraq although his family is originally from Amedi-Duhok.  He is in his senior year as a student in the International Relations department of the Catholic University in Erbil, Iraq.  Adad has articles published in Iraqi/Assyrian and American journals and participated in Germany’s international summer program 2019, on “Religious Diversity”.  Adad speaks four languages fluently including:  Syriac, Arabic, English and Kurdish-Badini dialect.