The May 2018 election results shocked Iraq. Officially, it was the lowest voter turnout recorded since the first freely held elections after the fall of Saddam Hussein in 2005. According to the Institute for Democracy and Electoral Assistance (IDEA) Iraq recorded a 79.63% voter turnout in 2005.  The recorded voter turnout in 2018 was 44.85%.  The reasons for less than half the eligible voting population participating and the impact of these elections on Christian minority communities in Iraq, is what this article will discuss.

National election results did not match expectations for several reasons.  Social dynamics have changed in Iraq partly because of social media network campaigns conducted before the elections calling for a boycott. Social media focused attention on the current government’s inability to combat corruption and the inequity of the present system in terms of ensuring minority rights and protection.  Followers of social media in Iraq were saturated with the message: “What’s the point?  Nothing will change.  Don’t bother to vote.”  Election committees instituted complex, lengthy and time-consuming registration procedures, limited the hours polls were open for voters and did not make adequate provision for security during voting.  Consequently, the total number of possible voters was restricted and further marginalized minority communities. These strategies were largely successful in terms of deterring voter participation in Iraq’s national and regional elections. In addition, installing new voting machines complicated rather than improved accountability.  People questioned the credibility of final vote counts and the legality of the election results.

For minorities and their candidates, the election results have been catastrophic. Christian minorities, including Chaldo-Assyrian people, who are the indigenous people of Iraq, face serious types of persecution from those in charge of the current government.   Both the Kurdish Regional Government (KRG) and the central Iraqi government elected officials have not kept their campaign promises regarding protecting minority rights. Of the 329 seats in Iraq’s government there are only a few allotted minority seats (the “quota”) for Chaldo-Assyrian, Yazidi and Shabak peoples.  The total number of minority seats is nine. Most seats (320) are for Kurds and Arabs.  Unfortunately, even the candidates elected for these limited number of seats gained these seats only after having been carefully selected by the Iraqi and Kurdish majority.

A well-known Assyrian politician, Mr. Yonadam Kanna, who was elected for three terms in the Iraqi National Assembly stated that the low turnout was caused by several factors. The first factor was disappointment by the electorate because of rampant corruption, high rates of unemployment, the absence of the rule of law and the practice of nepotism.  The second factor was not educating the population on the importance of participation in elections in order to create a healthy democracy and a peaceful transfer of power.  Finally, he said, members of the election committees were connected to the hegemonic political parties and had no interest or investment in the small number of minority party candidates.

Mr. Kanna added, “These elections were the worst elections because they lacked transparency. The electronic voting machines were not efficient for counting votes and they were criticized by many.”  These all adversely affected the election process.

He concluded that, “The elections have had a negative impact on minorities owing to the intervention by the KDP (Kurdish Democratic Party) and the Shi’ite political powers, specifically the ‘Al Fattah list’. Hence, there was only one out of the five possible seats gained from Christian votes. We cannot consider it a successful election.”

Moreover, disagreements among the few Christian political parties and politicians is weakening them and opening them up to infiltration by other groups who aim to gain influence and control.  To illustrate this, the Christian candidates who won the highest number of votes were supported either by the Kurds or the Shi’ite Arabs (as well as from within their own communities).  One KDP member tweeted, “KDP as the only multi religious party in Kurdistan, mobilized the Christian members and succeeded in winning 2 out of 5 seats of Christian quota” (see original Tweet below). This Tweet illustrates the powerful sway the KDP exerts over some of the Christian parties. 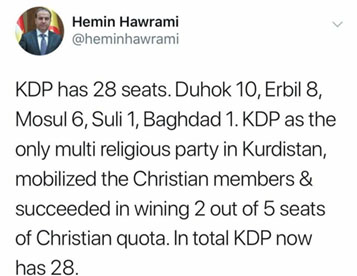 Shi’ite and Iranian influence in Iraq’s politics is in evidence through the Shi’ite votes cast for the Babylon list and from affiliated politicians in Iraq’s government.   The “Babylon list” is a list of Christian political candidates (within the quota) headed by Mr. Rayan Al-Kaldani.  Mr. Al-Kaldani is the leader of one of the Christian militias, called the “Babylon Brigade,” which claims affiliation to the Badr organization. The Badr Organization of Reconstruction and Development (Badr Organization), also referred to as the “Badr Brigade,” was formed by Hadi al-Amiri in 1983 as the armed wing of the largest Shiite political party in Iraq, the Supreme Council for the Islamic Revolution in Iraq (SCIRI). The Badr Organization is considered “Iran’s oldest proxy in Iraq” because of its close and lasting ties to Tehran. In January 2017, Badr commander Qasim al-Araji was confirmed as Iraq’s Minister of Interior, replacing Mohammed Ghabban. Araji is a former member of the Iranian Revolutionary Guard Corps (IRGC) Quds Force and was twice arrested by U.S. forces for working with the insurgency during the U.S. war in Iraq. In a July 2017 report by the SWP German Institute for International and Security Affairs they reported that, “Since Badr established control over the province of Diyala and the Interior Ministry of Baghdad, the organization has grown appreciably and is now playing a role similar to that of Hezbollah in Lebanon. Badr is also part of a growing “Shiite International” which supports the regime of Bashar al-Assad in Syria.”

Most of the Babylon Brigade’s members are Shiite Muslims and only a few are Sunni Muslims and Christians.  It follows that the KDP and Shiite influencers (such as the Badr organization) will be able to apply pressure on the Christian members of parliament and request/require their reciprocal support on legislation, policies and funding approval.

Another minority candidate for a parliamentary seat in the Iraq national elections was Dr. Muna Yaqo. She was also a member of the Constitutional Committee of the KRG.  Dr. Yaqo explained the low Christian turnout was mostly due to the Christian community’s disappointment in their own leaders (because of corruption), and their disloyalty to their own people in terms of preserving their rights as an indigenous people. “The disunity among the Christian political parties contributes to dispersing the people’s vote and is leading them to avoid participation in the elections. Furthermore, this disunity is raising tensions within the Christian community.” She remarked.  Dr. Yaqo called the election process “unfair with negative impacts on the minorities;” mentioning that there should be an amendment to the quota law making it limited to Christians as a way to ensure their consistent and active participation in government.

“This Constitution shall guarantee the administrative, political, cultural, and educational rights of the various nationalities, such as Turkomen, Chaldeans, Assyrians, and all other constituents, and this shall be regulated by law.”

This article and other articles are not yet regulated by law. Mr. Khoshaba hopes to push for laws required to save the rights of Christians and other minorities in Iraq.

Mr. Khoshaba believes the low turnout may also be attributed to the rigid procedures the Independent High Electoral Commission (IHEC) imposed on citizens to register and to the cumbersome voting process. He reprimanded the corrupted electoral process in his campaign speeches and declared the need for Iraqis to have more experience in practicing democracy.

Mr. Aziz Emmanuel, a candidate who ran for one of the minority seats in the last election, reinforced the fact that Christian minorities are neglected. “These five seats designated for Christians are not enough to represent our minority.” He said. “Many of the minorities who are in the diaspora fled due to security concerns and instability; therefore, if we had more seats we might have a better chance of saving our rights and maybe stopping the emigration.”  He also predicted that even the minority candidates elected to parliament will face difficulties in achieving their goals owing to their small number. Mr. Emmanuel criticized the election process and noted that significant citizen participation in elections is crucial if Iraq aims to have a real democracy.

The next step to retain what little influence they have is to propose an amendment to the constitutional articles which are directly related to protecting minority rights from the exploitation of other powerful political parties in the region.  Even after passing an amendment the challenges involved enforcing the law will be tremendous.

Iraq’s minorities need to have their confidence restored in the political and electoral process so they will be encouraged to participate and most importantly to remain in Iraq to work for a more equitable and secure future for their constituents.  Christian communities need to encourage their members to run for political office, to be involved in campaigns, to use social media to their advantage and to vote.

Adad Alan Shmuel was born in Mosul, Iraq but his family is originally from Amedi-Duhok. He is currently a student in the International Relations department of the Catholic University of Erbil. Adad speaks four languages fluently including: Syriac, Arabic, English and Kurdish-Badini dialect.