“If I look out to 2025, and I look at the demographics and the economic situation, I think China probably poses the greatest threat to our nation by about 2025.”

During General Dunford’s, Chairman of the Joint Chief of Staff, reappointment hearing in September 2017, he told Congress that China is likely to be the “greatest threat” to the U.S. by 2025. Dunford’s assessment has some truth to it as China continues to increase their defense spending and their regional influence through development projects like their Belt and Road Initiative. Unfortunately, China’s growing international influence comes at a time when U.S. diplomatic and development efforts have decreased due to budget constraints.

As U.S strategy shifts towards great power competition, the U.S. Army must fully integrate civil affairs forces into their Echelons Above Brigade concept. Civil affairs are the Department of Defense’s (DoD’s) primary force, specifically trained and educated to engage and influence the civil component of the environment. These forces provide the Joint Force Commander the capability to understand and shape the operational environment to stay ahead of near-peer adversaries during great power competition. More importantly, civil affairs play a key role in planning, coordinating, and synchronizing with interagency partners to achieve unity of effort. Civil affairs activities are decisive in accomplishing the Joint Force Commanders' objectives in both traditional and irregular warfare activities that may be inappropriate for conventional forces.

During the Cold War, the U.S. employed all elements of national power to influence vulnerable states and advance U.S. national interests while competing with the Soviet Union. These tools included foreign assistance, economic assistance, strategic communications, and security assistance programs to prevent Soviet expansion throughout Europe, Southeast Asia, and South America. These activities are more important now than ever as the U.S. competes for influence over weak states as Russia and China employ a combination of regular and irregular activities to expand their global power in all domains. Civil affairs regional focus, cultural insights, and language capabilities provide Joint Force Commanders and U.S. interagency partners a military option to expand U.S. influence and interests in highly competitive and politically sensitive operational environments. 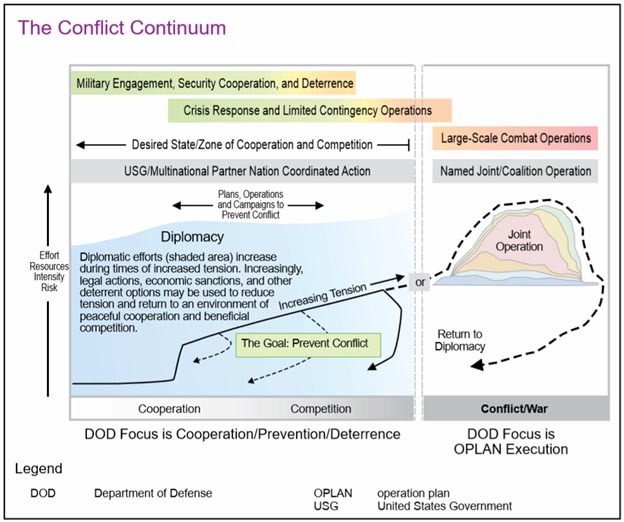 As the U.S. Army increases lethality and readiness for conflict deterrence at all echelons and domains, civil affairs will remain an essential part of the U.S. defense strategy as they continually conduct irregular warfare activities to shape the operational environment throughout the competition stage to prevent conflicts. DoDD 3000.07 defines Irregular Warfare as:

Irregular Warfare (IW) is conducted independently of, or in combination with, traditional warfare.

(1) IW can include any relevant DoD activity and operation such as counterterrorism; unconventional warfare; foreign internal defense; counterinsurgency; and stability operations that, in the context of IW, involve establishing or re-establishing order in a fragile state or territory.

(2) While these activities, whether undertaken in sequence, in parallel, or in blended form, may occur across the full range of military operations, the balance or primary focus of operations gives a campaign its predominant character.

(3) Before, during, and after IW and traditional warfare, various programs, missions, and activities can occur that shape the environment and serve to deter or prevent war.  These may include military engagement, security cooperation, deterrence activities, cyberspace operations, military information support operations (MISO), strategic communication, and civil-military operations.[4]

Although civil affairs contribute to all irregular warfare activities, they are the U.S. Army’s primary force in planning and synchronizing stabilization efforts with interagency partners. Stability operations support U.S. security interests by providing assistance and reassuring vulnerable states to counter competitors influence. Even more important as China’s continues to expand their power in the Asia-Pacific region and Russia throughout Eastern Europe and the Middle East. Hence, for stability operations to be successful, the U.S. Army must include civil affairs forces at all echelons to enable the sharing of critical information and to leverage U.S. agencies authorities to support the Joint Force objectives. 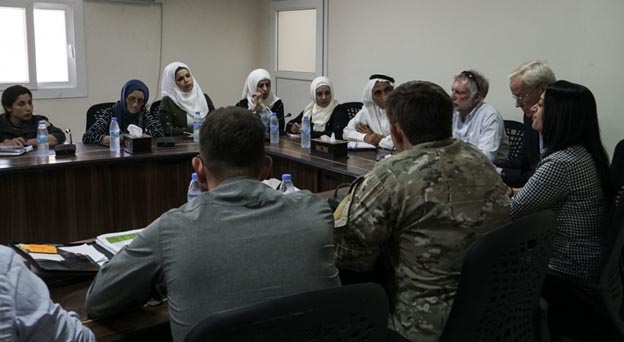 Photo: Larry Bartlett, Senior Advisor for the Syrian Transition Assistance Response Team, and Ambassador William V. Roebuck, meet with members of the Civil Administration of Manbij to discuss the safety and stability of the city on the two-year anniversary of their liberation from ISIS in Manbij, Syria, August 9, 2018. The MMC members and Bartlett's team discussed topics such as education, civil affairs and media. (U.S. Air Force photo by Staff Sgt. Izabella Sullivan)[6]

Integrate with U.S. interagency. Effectively expanding the competitive space requires combined actions with the U.S. interagency to employ all dimensions of national power. We will assist the efforts of the Departments of State, Treasury, Justice, Energy, Homeland Security, Commerce, USAID, as well as the Intelligence Community, law enforcement, and others to identify and build partnerships to address areas of economic, technological, and informational vulnerabilities.

Counter coercion and subversion. In competition short of armed conflict, revisionist powers and rogue regimes are using corruption, predatory economic practices, propaganda, political subversion, proxies, and the threat or use of military force to change facts on the ground. Some are particularly adept at exploiting their economic relationships with many of our security partners. We will support U.S. interagency approaches and work by, with, and through our allies and partners to secure our interests and counteract this coercion.

Foster a competitive mindset.  To succeed in the emerging security environment, our Department and Joint Force will have to out-think, out-maneuver, out-partner, and out-innovate revisionist powers, rogue regimes, terrorists, and other threat actors.[7]

Civil affairs forces contribute to this strategic approach through several activities that build partner capacity and strengthen alliances during all phases of the conflict continuum. However, there is no formal organization for both civil affairs forces and interagency partners to efficiently coordinate and synchronize efforts and quickly develop civil-military teams to support the Joint Force Commander in emerging security environments. In General Tony Zinni’s recent book, Before the First Shots are Fired: How America Can Win or Lose Off the Battlefield, he recommended “that the military's civil affairs organization become a unified command; responsible for integrating all the agencies' efforts and providing the planning, administrative, and logistical support for the interagency teams operating on the ground."[8] Hence, to be more agile and flexible, the U.S. Army with the Department of State and USAID must establish a permanent organization to better coordinate and synchronize stabilization efforts during great power competition. Moreover, this would enhance cooperation and provide oversight of stabilization activities to achieve unity of effort and increase U.S. advantage over competitors. 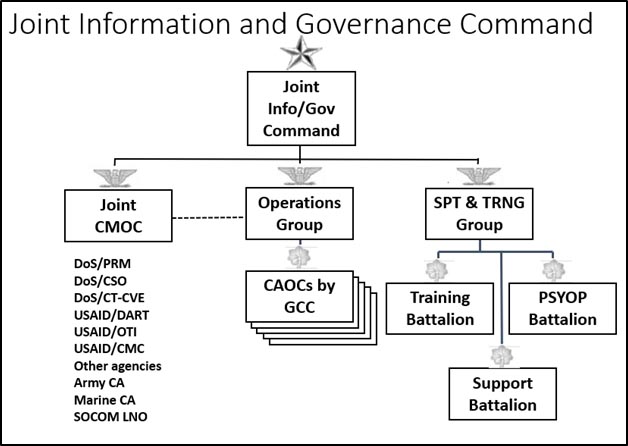 Figure 2: Example of a permanent organization to facilitate civil-military coordination.[9]

“To meet the challenges of this new and evolving security environment, requiring both conventional and irregular warfare at much higher scale and intensity, our Army must prepare for the most lethal and challenging threat to our nation: the increasing likelihood of highly contested great power conflict.”

As the U.S. Army continues to be threat focused, it cannot lose sight that great power competition is a form of population-centric warfare. Hence, competitors will use economics, cultural ties, and shared values and norms as a means to advance their strategic objectives. One example is Russia’s annexation of Crimea from Ukraine through propaganda and Russian cultural ties. Another example is how China is using economic power and infrastructure projects to increase their influence throughout the Asia-Pacific region. U.S. Army formations, echelons above brigade, must ensure that civil affairs forces have the necessary permissions and funding to quickly address populations needs to buy time until USAID or other agencies can address the stabilization needs in the operational environment.

In recent contingency operations, civil affairs forces were constrained by limited funding and authorities to conduct stability operations due to the stigma that came with the misuse of funds in Iraq and Afghanistan. However, a flexible funding source is critical to support the Joint Force Commanders objectives and to conduct targeted stabilization activities until the operational environment is secure enough for interagency partners to take the lead. Just as the U.S. Army is investing in their information warfare capability, they must invest in stabilization efforts that physically demonstrate U.S. support and build trust with local partners as competitors like China continue to use economic power to exploit weak states.

To enable the Joint Force to stay ahead of near-peer adversaries during great power competition, the U.S. Army must integrate civil affairs forces into their Echelons Above Brigade concept. Civil affairs are significant in planning, coordinating, and synchronizing with interagency partners to achieve unity of effort in both traditional and irregular warfare activities. Civil affairs play a major role in conducting stabilization activities in preparing and shaping the operational environment for the U.S. Army and Joint Force Commanders throughout all stages of the conflict continuum. These coordinated activities with interagency partners in vulnerable states increase indigenous partners capacity to deter third-party influence during great power competition. Additionally, civil affairs activities increase the Joint Force Commanders understanding of the operational environment and are necessary to set conditions for rapid transition to armed conflict should deterrence fail.

[8] GEN (ret) Tony Zinni, "Before the First Shots are Fired: How America Can Win or Lose Off the Battlefield" September 15, 2015. General Tony Zinni is a former United States Marine Corps General and a former Commander of the United States Central Command (CENTCOM).

[9] Assad A. Raza and Jerritt A. Lynn, The Future of Civil Affairs: Creating Regimental Order from Chaos, October 2018. https://smallwarsjournal.com/jrnl/art/future-civil-affairs-creating-regimental-order-chaos “The Joint Civil Military Operations Center would serve as an operational to strategic- level organization to maintain continuous coordination with interagency partners in support of TSOCs, GCCs, and USEMBs objectives. This operational center would facilitate cooperation with interagency partners in areas of common interest, promote a common civil operational picture, and enable sharing of critical information and resources to support population-centric operations. All stakeholders who contribute to either foreign humanitarian assistance and stabilization activities throughout USG will bring their expertise and authorities to streamline solutions and resources to support USG objectives collectively.”