Disciplined Initiative and The Commander’s Intent

Disciplined Initiative and The Commander’s Intent

Commanders drive planning by describing their understanding and visualization of the Operational Environment (OE) to staffs and subordinate commanders.  The Commander’s Intent is clearly the major inject point of conceptual planning from Army Design Methodology (ADM) into detailed planning.  Yet many commanders struggle to write effective Intent statements in a manner that clearly describe their visualization, facilitates effective planning, and provides for disciplined initiative.  This article addresses only the Commander’s Intent, specifically the “Key Tasks” portion.

Army Doctrine Reference Publication (ADRP) 5-0, The Operations Process, states that “Key tasks are not specified tasks for any subordinate unit; however, they may be sources of implied tasks… Examples of key tasks include terrain the force must control or an effect the force must have on the enemy” (ADRP 5-0, page 2-19).  Over the last two decades, the Key Tasks portion of Commander’s Intent had, in too many instances, become a lengthy “laundry list” of everything the Commander thought necessary for mission accomplishment.  The Key Task “list” was oftentimes so long that staffs were unable to discern what was genuinely “Key” to the commander.  Many staffs interpreted the lengthy Key Task “list” as the Commander prescribing or directing a course of action (COA) to them.  Staffs also struggled with using these Key Tasks as a basis for evaluation criteria (i.e., how many to use, which should be weighted, etc.).  As a result, Army doctrine writers removed Key Tasks from Commander’s Intent in the March 2010 edition of FM 5-0, The Operations Process (Key Tasks were brought back into the Commander’s Intent in the May 2012 version of ADRP 5-0).

Further complicating this challenge, Army doctrine is inundated with the term “task.”  Variations include: Commander’s tasks, staff tasks, offensive tasks, defensive tasks, stability tasks, tactical mission tasks, critical tasks, essential tasks, ad infinitum.  Planning staffs routinely struggle to differentiate between tactical mission tasks, critical tasks, essential tasks, and key tasks; is it any wonder that the concept of key tasks is abused/misused?  This article proposes replacing the term “Key Tasks” with a term that emphasizes the relationship between Key Tasks and the operational approach: “Approach.”  The Approach would consist of a short list of tasks, efforts, or effects with corresponding purposes or level of importance.

It is important to understand how the operational approach, developed either in the Design Concept or through the commander’s personal visualization, informs development of the Key Tasks (Approach) in the Commander’s Intent.  Mission Command philosophy facilitates bridging existing gaps between the art of command and the science of control.  According to ADRP 6-0, Mission Command, the Mission Command concept provides commanders a mechanism to “counter the uncertainty of operations by reducing the amount of certainty needed to act.”  This is profound; mission command provides staffs and subordinate leaders the ability to act on a concept, rather than rely on a detailed plan for execution.  This further validates the importance of the Commander’s Intent.

Given the complexity and ambiguity of operations, the Commander’s Intent must provide focus to staffs and subordinate leaders as they “wade” through uncertainty.  Current and future operations are nebulous; conditions change often and rapidly.  Subordinate leaders must often make decisions that have strategic implications without first talking to their commanders; an engagement with a local tribal leader, followed by an offensive operation, transitioning to partnering with a host nation police chief, then conducting an assessment of local infrastructure capacity.  Constantly confronted with unanticipated conditions or events, subordinate leaders must routinely make decisions without instructions written in an OPORD from higher headquarters (think of the Rapid Decision Making and Synchronization Process [RDSP]).  TRADOC Pamphlet 525-3-1, Army Operating Concept – Win in a Complex World, stresses that Army leaders must improve and thrive in ambiguity; rather than seeking favorable force ratios at a decisive point, leaders must achieve cognitive dominance to prevent, shape, and win in the future OE.  Concise, understandable Commander’s Intent statements, with a clearly understood Approach, will drive cognitive dominance. 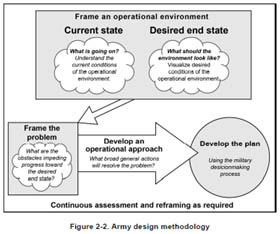 Remember the importance of Warning Orders (WARNORDs); while staffs directly receive planning guidance for COA development and subsequent planning, subordinate commanders do not, and they are also “consumers” of the Commander’s Intent.  Removal of “Key Tasks” from the Commander’s Intent in the March 2010 version of FM 5-0 was an overly hasty response to leaders who wrote a litany of prescriptive tasks.  The doctrinal result was a neutered statement containing an optional “Purpose”, coupled with a “cookie cutter” end-state that provided little to nothing for subordinate commanders to use for planning.  When a division headquarters published WARNORD #2, what description of the division commander’s visualization did BCT Commanders use to conduct parallel planning?  ADRP 5-0 The Operations Process, May 2012, rightly reintroduced Key Tasks back into Commander’s Intent.

In the interests of common understanding, facilitating planning (and parallel planning by subordinate units), and overall improvement in Mission Command as the integrating warfighting function, “Approach” should replace the term “Key Tasks” of Commander’s Intent.  Developed by the commander either individually or assisted by a “Design Team,” the Approach can address specific actions to be accomplished, conditions to be established, use of defeat or stability mechanisms, and potential lines of operation or lines of effort (Kem).  Since the Approach is a broad conceptualization to resolving the problem, staffs would be less constrained in planning, yet be enabled to translate the Approach (along with the broader purpose and end-state) into feasible, acceptable, suitable COAs.

The terminology used for describing the Approach should be clear, concise, unambiguous words and should state the “why.”  Phrases like “Aggressively mass effects on OBJ BRAVO” are useless (would a unit timidly mass effects?).  Standing Operating Procedure (SOP) or obvious implied task phrases like “Conduct river crossing,” “Conduct RSO&I IAW Annex W,” “Protect the population – take all precautions to limit civilian casualties,” or “Conduct forward passage of lines” are specified or implied tasks that would be described in the Concept of Operations.  On the other hand, the following examples of Approach events state the “why” and describe tasks, efforts, or effects with corresponding purposes or levels of importance that would enable staffs to plan and subordinate leaders to execute with disciplined initiative:

“Sever ENY LOCs in the vicinity of OBJ XXXXX to isolate his offensive capability.”

“Focus IO on influencing the population to not interfere with Coalition operations.”

“Control border to dissuade ENY intervention and isolate [insurgent] from sources of support.”

“Restore essential services to acceptable levels to facilitate a return to normalcy.”

“Influence local leadership and power brokers to support the government and denounce [insurgency].”

Some in the doctrine community advocate reducing the Commander’s Intent to simply the commander’s visualization of the end-state.  They argue that the current expanded Purpose is already contained in the mission and intent of the next two higher headquarters, and the Key Tasks are no different than the essential tasks specified in the mission statement.  While the definitions of Key Tasks and Essential Tasks are vague enough to create problems differentiating between the two (as stated earlier), the complexity of current and future operations requires commanders to articulate an Approach to staffs and subordinate leaders that provides them the ability to immediately exercise judgment based upon concepts, rather than waiting on detailed orders.  The “why” is key to creating opportunities for disciplined initiative.

Brian C. Leakey is an Assistant Professor and Staff Group Advisor in the Department of Army Tactics at the United States Army Command and General Staff College. He retired from the United States Army in 2005 after 21 years of active service as an Armor officer. During his career, he served with the 11th Armored Cavalry Regiment, 2nd Infantry Division, TRADOC, and I Corps. He earned a M.A. in Education from Eastern New Mexico University. These are his own opinions and do not necessarily reflect those of the U.S. Army or Department of Defense.

I've continuously struggled with what I have come to understand as the core idea behind mission command: unity of purpose in the absence of specific instructions. I struggle because on the one hand I understand and accept the idea. On the other hand, I have yet to see it expressed in a way that is intuitively understandable.

Take expanded purpose for example. What is the point of it? If my mission is to secure OBJ X, and its purpose is to disrupt enemy in vicinity Y, what is the need for me to account for the grand master plan? Am I so clueless otherwise that I could not understand why my Task Force is in the AO in the first place without this purpose? If my Task Force is defeated but my battalion or company is still intact, am I to prosecute the operation until I am defeated also? As it is currently constructed I Would imagine the expanded purpose for Operation Overlord would have been "defeat Nazi regime in order to restore international borders and deter aggression". True, yes...but a throw away line for sure.

I tend to agree with the article's critique of Key Tasks. But even here I find that the tasks presented in the concluding example are without a home in a narrative. Perhaps that is what the Expanded Purpose was supposed to be...the narrative explaining the raison d'etre of the operation and tying the tasks into a coherent whole. But I hazard to say that most commanders don't put much thought behind the narrative and are content with the mission statement. Thus, their narrative becomes a headline-style statement about the bigger "why" with a few seconds thought behind it.

If Mission Command is supposed to make us more lethal by enabling us to be more adaptable in execution, then we need to find ways of expressing purpose in meaningful ways. Otherwise, I would be tempted to argue that the Mission Statement by its self is sufficient when coupled with a standing orders issued at the beginning of the campaign . E.g. in the absence of orders all US Forces will seek out the enemy, ensure local populations are under control of X forces, and will obey the LOAC. Every thing else is details...