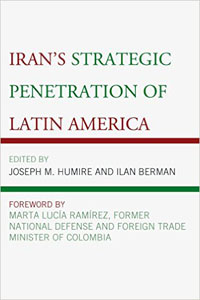 This dispassionate analysis of Iranian involvement in Latin America is an ambitious and successful attempt to persuade readers of the profound national security implications of Iran’s growing influence in that region. Editors and foreign policy pundits Joseph Humire and Ilan Berman contend that Iran is leveraging the anti-U.S. sentiment of several leftist countries in the region, including Venezuela, Ecuador, Argentina, and Bolivia, to expand Iranian influence in the Western hemisphere. The editors, in addition to their respective contributions to the volume, have assembled an impressive list of contributors, ranging from Brazilian journalist Leonardo Coutinho to Bolivian congressman Adrián Oliva. Humire, who justifiably describes himself as “one of the foremost experts in the United States on Iran’s influence in Latin America,” is the executive director for the Washington think tank Secure Free Society (SFS), and has testified before Congress on several occasions regarding Iranian strategy and objectives in the Western Hemisphere. Berman, a member of the Defense Studies faculty at Missouri State, is equally qualified, having written on Iran in several full-length works and as editor of The Journal of International Security Affairs.

Humire, Berman, and the other contributors do not stray far from the central theme of the book: Iran, and the surrogate terrorist organizations associated with Iran, are infiltrating Latin America in order to build influence in a manner potentially threatening to both U.S. national security and regional stability. It begins with an explanation of the budding relationship between the leftist ALBA (Alianza Bolivariana para los Pueblos de Nuestra América, or Bolivarian Alliance for the Peoples of our America) countries associated with Hugo Chavez’s Venezuelan brand of Latin American socialism and Iran. Subsequent chapters methodically analyze Iran’s individual relationship with several countries in Latin America and draw the reader’s attention to particular areas of concern.

The authors present a breadth of information covering overt and covert Iranian involvement in Latin America, ranging from the 1994 Hezbollah bombing of a Jewish cultural center in Buenos Aires, Iranian use of the regional monetary system SUCRE (Sistema Único de Compensación Regional or Unified System for Regional Compensation) to avoid sanctions, and the presence of Iranian military advisors at the ALBA regional defense school in Bolivia. Each contributor’s argument contributes to a convincingly sinister picture of nefarious Iranian activity in Latin America. The book culminates in Berman and Humire’s conclusion, “Crafting a Hemispheric Response,” where they offer seven national policy arguments to counter Iranian influence in the region. Every author’s essay is well researched and effective. The contributors use meticulously documented sources, including interviews with Latin American intelligence officials, news media reports, and Wikileaks releases.

Certain academics, including Humire and former Washington Post journalist Doug Farah, have been publishing, speaking publicly, and testifying about Iranian influence in the Western Hemisphere for the past decade. However, Iran’s Strategic Penetration of Latin America provides one of the most current, consolidated reports on Iran’s current and past activities in the region, as well as the collective interpretation of Iranian strategic objectives in the hemisphere. Recognizing that some readers might find the theme of Iran’s Strategic Penetration radical, Humire addresses these concerns by emphasizing that many of the contributors are Latin American journalists, academics, and government leaders, thus avoiding a U.S.-centric argument. However, Humire’s predictions regarding the growing Iranian influence in Latin America and associated national security implications are unlikely to sway readers already under the spell of Hugo Chavez’s Bolivarismo.

For national security professionals, diplomats, and other stakeholders who are engaged in partnerships and business in Latin America, Iran’s Strategic Penetration of Latin America will serve as a wake-up call to the growing network of Iranian connections in the region and growing threat to U.S. national interests. If occasionally alarmist, it is readily apparent that Humire, Berman, and the other authors are whole-heartedly committed to illuminating Iran’s activities to the widest possible audience. After reading this informative exposé, if not yet converted, readers may be well on their way.

CPT Matt Bauer is a U.S. Army Special Forces officer. He previously served in the 82nd Airborne Division and 7th Special Forces Group (Airborne), and is currently a graduate student at the Naval Postgraduate School. He has multiple deployments to the Middle East and Latin America.