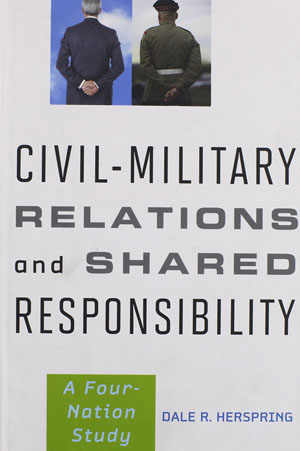 The 2013 book Civil-Military Relations and Shared Responsibility[i] by Dale Herspring is a valuable and deeply researched source that provides a rarely-so-comprehensive comparative analysis of civil-military relations across four distinct nations; Canada, Russia, Germany, and the United States. Given the critical importance of Civil-Military relations in preparing for and conducting warfare for all nations, such a comparative analysis of countries big, small, rediscovering their heritage, updating their doctrine, or defining themselves for the first time, is extremely valuable. The specific concept explored is a situation of ‘shared responsibility’ between the military leadership and civilian leadership in working to set defence, procurement, or international policy, as well as in strategic decision making. While a seemingly obvious approach to government, such a situation exists only fleetingly in contemporary history, and Herspring brings key moments in each of the four nation’s civil-military histories under inspection in order to test for its existence and determine if it lasted; The particular lenses applied are those of interpersonal, group, and institutional interactions, and through these Herspring provides an engaging historical narrative and compelling analysis of a potentially very useful theory.

Within the analysis of each nation, different leaders, defence ministers, and governments are compared chronologically from a given starting point that generally marks the start of the contemporary period for the relations between that particular state and its military. Specific relationships between individual leaders and groups are highlighted in order to show how different dynamics impact military performance in the field, as well as the relationship between the government and its armies. The central question the book seeks to answer is at what points, if ever, have the nations of Russia, Canada, the United States, or Germany achieved a civil-military relationship describable as ‘shared responsibility’. The idea of shared responsibility is described in the text by first surveying what several authors have put fourth in describing the civil-military relationship, but is best captured in a quote by Douglas Bland, the work of whom Herspring is generally building off. Bland describes shared responsibility as:

Making the point clearer, Hersping continues to build off of Bland and others such as Deborah Avant, and Rebecca Schiff, offering that the ideal relationship of shared responsibility is best described as one in which the civilian authorities direct, rather than dominate the military, and where the military can voice dissenting opinions, seek beneficial military-related policy, and generally be heard and respected in the decision making process. This creates a situation more akin to an interactive exchange of “healthy conflict”[iii] in which neither side wins alone, but together triumph through the formation of better foreign/defence policy and a content/capable military.

This idea of shared responsibility is counter to the ideas of Huntington or Kemp & Hudlin, who would offer the relationship between civilian authorities and military leadership is more adversarial, with each trying to exert influence over public policy, or that it functions best when the distinct lines between the military and civilian spheres are clear and the spheres separate; Herspring however suggests that the understanding “civilians decide on the ends of policy, and the military is responsible for the means”[iv] is too simple, and that the “magic line”[v] between the civilian and military spheres does not exist. Military officers lead civilian lives and have individual opinions, particularly on issues of defense, that vary from one officer to the next. Likewise, civilian leaders have varying opinions and priorities.

Key to Herspring’s approach is that he identified the difficulty in attempting to discern whether a policy was more or less ‘influenced’ by the ‘military sphere’ or the ‘civilian sphere’. Instead, rather than seeking to identify influence, the motivations and ideas of individual key players on the civilian and military sides must be understood, as well as the dynamics of the formal and informal relationships between them. To do this, the structure of the analysis is a two-part history of each country’s civil-military relations, with the lens sharply focused on defence ministers, chiefs of staff, and national leaders. The narratives presented are as much about the character and personalities of each individual, and how these qualities effected the civ-mil relationship; illustrative tangents about events such as the row between McNamara and Admiral Anderson[vi] not only keeping the reader engaged but demonstrating clearly the manifestation of civil-mil relations at that moment for that nation.

The text is extremely useful as a research source for research and developed related to Canada’s civil-military relationship, as Canada is not only examined, but is understood to have a particularly poor history in this regard, with the contemporary situation looking only a shade of grey better; reflection upon past errors providing an excellent first step in improving the future. The comparative analysis provided examines each country because of their unique situations; Germany with its lack of post-WW2 military culture and fear of a dominating military, Russia with its deep use of brutality and history of civilian interference, and the US, for its having been the original case study and a trend towards shared responsibility. Throughout, specific useful connections and comparisons are made by Herspring that are invaluable launching points when considering how Canada ought to move forward, such the common comparisons between Lyndon Johnson or Bill Clinton to the Pierre Trudeau, the explored differences between the approaches of Hellyer and Hillier, and the profiling of exemplary leaders in seeking/fostering shared responsibility such as the American Defence Secretary Robert Gates, or Canadian Defense Minister Brooke Claxton. As well, different crisis in which the civ-mil relationship was engaged are examined, and each is identified as representing a moment of ideal or poor shared responsibility in decision making; this illustrating how when dynamic of the civil-military relationship is shifted and allowed to function with a framework of shared responsibility, everyone benefits, even where there is a contemporary history of a dysfunctional relationship. A prime example of this that Herspring provides is the failed Iranian rescue attempt; while the operation failed, the planning and decision making process was one in which Jimmy Carter respected military culture and did not interfere with operations, as well as took responsibility for alongside the military leadership.

Representing an incredible amount of research and effort, Civil-Military Relations and Shared Responsibility is a must read for anyone interested in policy formation, presenting excellent examples and doing so in a compelling and entertaining manner. The concept itself, as presented by Herspring, represents an ideal framework for policy formation in military/diplomacy matter, but as the book highlights again and again, such a framework is another of those that are easier aspired to than implemented; much due to the realities of institutional, inter-group, and interpersonal relationships, particularly at such heights of decision making. That said, where there was a gap in the literature regarding practical analysis of a new idea in institutional structuring of defence, Herspring’s work comfortably establishes a foundation for filling the breach.

Conrad Orr is a recent Masters graduate of the Royal Military College of Canada's War Studies program, focusing on emerging trends in military technology and policy formation. Conrad also holds a bachelors degree in Law from Carleton University in Ottawa.