All criminal organizations in the world share similarities, but, at the same time exhibit particularities related to the places, times and cultures that gives rise to and surround them. Consequentially, organized crime in Mexico has a sui generis composition—the result of historical factors that have allowed the formation of criminal structures linked to high levels of violence, a cultural acceptance of criminal life and links with high political figures, causing the collapse of governability in certain territories, some of them near the northern border.

Tamaulipas is an example of where Peter Lupsha’s three phases are experienced when Transnational Organized Crime challenges the Nation-State: predatory, parasitic, and symbiotic. This development is the result of an uninterrupted cycle which began more than 200 years ago: bands of border smugglers, over time, laid solid foundations for very adaptable criminal networks, which grew partially because of governmental permissibility (or, arguably, negligence) and partially because of their efficient use of violence, intimidation and corruption. Today, the challenge to control organized crime in northern Mexico is huge; criminal organizations on their last evolutionary phase have managed to co-opt several institutions and undermined the public’s trust in them.

Crime Inside the State

International borders are water for criminals and stone for the police. [1]

The concept of organized crime is not new, not to criminals, not to authorities and not even to the general public; during the 20th century it even made it to mainstream entertainment and was somewhat romanticized in movies like The Godfather, Goodfellas, Scarface. Nevertheless, times have changed, and we live in a globalized and extremely complex world, with crime to match such characteristics. And although organized crime predates the Westphalian Nation-State, and it’s not as has usually depicted, it has continuously adapted and thrives, or as some author already said: “criminals sniff the windows of opportunity for their expansion in the weaknesses of the State, as a shark perceives a yarn of blood in the ocean.”[2]

The strengthening of criminal groups is directly linked to the globalization process in all its dimensions.[3] Crime has become part of the economy and world markets, it provides the equivalent of 1.5-1.7% of the world’s GDP, according to UNODC estimates, and 7% of its exports.[4] The reality is that organized crime is fundamentally capitalistic and has been able to develop according to the dynamics of globalization and laissez faire; this means that criminal organizations follow the rationale of any company, the objective, far from political and ideological, is financial, namely, to increase profits and expand no-matter-what.

The phenomenon of organized crime has developed worldwide thanks to several circumstances, including: the diversification of both illegal and legitimate activities by organized crime; the international cooperation between criminal groups, akin to corporate mergers; and the innovation as a guide for (criminal) strategic decisions, with an emphasis on modernization, optimization and adaptation according to continuously changing resources, opportunities and challenges.[5] These adaptations have produced structures with the complexity necessary to allow the continuity and growth of criminal networks over time, even infiltrating legitimate ones, like legal businesses and police or intelligence agencies.

For Peter Lupsha, Professor of the University of New Mexico, organized crime presents three stages in its development: a) the predatory phase, consisting of the existence of criminal gangs, which fail to become a threat to the State and are controllable by local security forces; b) the parasitic phase, in which exist complicity between organized crime and the State, there are wide margins of corruption to carry out illicit business in a successful manner, that is, the criminal society and the State are separate entities and are related through by pacts of mutual benefit; and c) the symbiotic phase, in which organized crime seizes the State’s sources of power and this favors the criminal structure completely, therefore the State's institutions and the crime composed a single entity, granting a state of impunity and the collapse of institutions.[6]  A summary of the three phases described by Lupsha as applied to Tamaulipas is provided in Table 1.

The Case of Tamaulipas

Tamaulipas is outside the production centers of the main illicit substances traditionally cultivated in Mexico, however, drug-related crimes and violence are prevalent there. The US-Mexico border makes Tamaulipas a strategic target for criminal organizations addressed to provide illicit substances for the US market. This, along with the weakness of the local institutions makes a perfect environment for crime to thrive. With the passage of time, the interaction between criminal groups and authorities normalized corruption.

The first antecedents of the criminal organizations in Tamaulipas go as far as the independence period, at the beginning of the 19th century, specifically in Matamoros (formerly El Refugio),[7] a port that functioned as a border center and later it became to be a maritime link for the smuggling of goods proceeds mainly from North America. It soon became one the most important clandestine entry-points, from where the contraband was promptly moved to Monterrey and later to Coahuila, Zacatecas and San Luis (territories in the center of the country).

In 1842, Manuel Payno, Mexican diplomat and writer, published his impressions of the City of Matamoros, emphasizing that most of the commerce in the locality was controlled by foreigners, who, also, carried out it illegally: “it is public and notorious that this population owes its existence to smuggling.”[8] Criminal organizations there had managed to establish networks which operated on both sides of the new border (territorial limits established in the Treaties of Guadalupe-Hidalgo, 1848), protected by the inability of the Mexican State to protect the integrity of all its territories and impose law and order.

At this stage of the crime in Tamaulipas, there was no, or at least in evident substance, complicity, relationship or agreement with the State on the part of the gangs of smugglers. The authorities knew of the presence of contraband, however, did not have the will or power to stop it, because the big distance between Tamaulipas territory and the capital of the incipient State. The circumstances that led to the loss of control of this region by the authorities are the result of the frequent crises caused by the revolutions, insurrections and foreign interventions which characterized Mexico’s 19th century. In a similar fashion, other isolated northern territories fostered criminal organizations which continued operating along the border, growing.

The beginning of the complicity between authorities and organized crime stems indirectly from the economic policies of the pre-Reform era (1856), which prevented the development of infrastructure and institutions on the periphery territories, far from Mexico City. These states couldn’t save or control their own budgets, since most of the income from taxes and other sums of legitimate origin ended in the Mexican capital, in the pocket of rulers or in hands of thieves along the road.

Thus, the centralized economy and the local government’s weakness caused a lot of customs agents to make deals with the smugglers. Besides the corruption, the memory of the 1847 war was still fresh, as was that of the secession of Texas, and in order to avoid further border problems, the higher echelons of government allowed a smuggling to thrive, since it was well known that what kept trade and economy alive in those territories was smuggling.[9]

Negligence, fear, impotence, poverty and convenience, all came together to tighten the relation between the public servants and criminals in northern Mexico.

It has been shown that in Mexico, organized crime, especially drug-related, evolved (especially in the latter part of the 20th century) as an actor subordinated to the authoritarian post-revolutionary Mexican regime.[10] In the case of Tamaulipas, there was a symbiosis between political and criminal actors, following Peter Lupsha: a flagrant co-optation of the State.

The most important drug trafficking organization in the region was headed by people who held positions of local and federal authority, which allowed this organization its consolidation as the most important criminal organization in the northeast of Mexico, which would be named in the nineties as Cártel del Golfo (CDG). This organization continued operating under relative discretion, enjoying the broadest guarantees of impunity and achieving social acceptance in some sectors at the end of the century.[11] This impunity might be reflected in the lack of action against the most powerful criminal groups and the efforts to disable minor criminal organizations, to appear that were working against them.[12]

This is an example within the national dynamics of the symbiotic phase, in which organized crime has control of state resources, favoring all kinds of activities and illicit enrichment, as well as the increase use of violence, which has behaved as an inherent tendency to the growth of criminal societies in this region.[13] 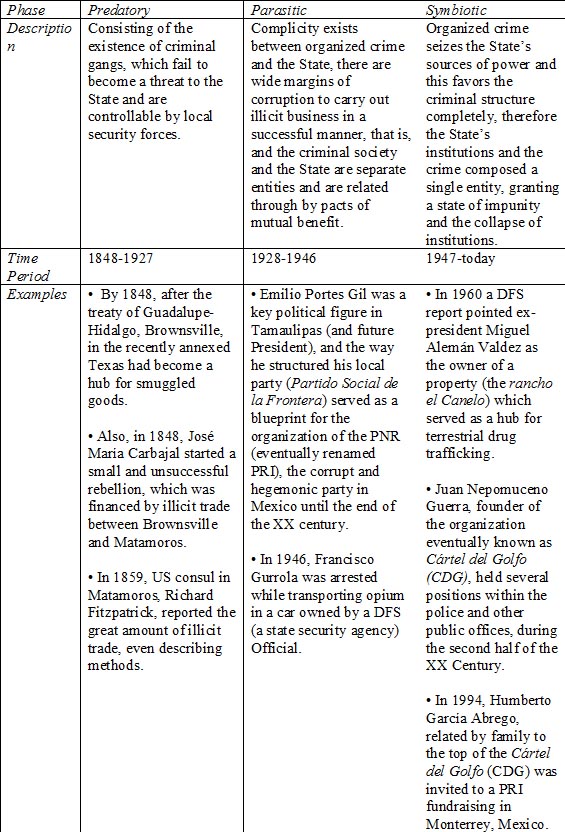 It is true that organized crime is present in all regions of the world, but in each location it is configured according to the local characteristics of economic development, political regime and socio-demographic characteristics; in the case of Tamaulipas, the criminal operation is associated with high levels of violence, accompanied by a deep institutional erosion, social dysfunctionality and a penetration in the structures of government by crime,[14] a situation that has been generated in the state as a historical result, which is related to illicit activities from its foundations, although it is important to emphasize that the major factor for the increase in the intensity of violence and crime is closely related to the endemic corruption that grants impunity, it is a determinism historical that could not be interrupted.

Mexico is immersed is a security crisis arising from the violent dispute between criminal organizations that seek to hegemonize drug trafficking in the territory, in Tamaulipas (and other states) the transactional relationship between officials and criminals who organized a system of drug mobilization inside and outside the borders, of course, being the fundamental mechanics, the mantle of protection on the part of members of the federal and local public power.

The “attempts” to dismantle the broad corrupt structure by recent Mexican administrations have not achieved their objective—they have simply allowed the fragmentation and the multiplicity of alliances between officials and criminals willing to expand their interests over their rivals.  This led to an increase in the rates of violence and the number of criminal acts what were registered as recent reports in multiple sources make this phenomenon evident.  It is also evident that only those criminal societies [cartels or gangs] that managed to build links with relevant actors in the spheres of power could continue to operate and dominate the criminal sphere eroding the thin line that exists between organized crime and the State.