War in the Woods:Combating the Marijuana Cartels on America’s Public Lands

The book War in the Woods provides a micro-level (tactical) perspective of raids on marijuana ‘grows’ found in California public lands from 2004 through 2009 by a California Department of Fish and Game officer. The book is easy to read and engaging. It is a professional publication devoid of any endnotes or references and utilizes a narrative approach that has been partially transcribed by a Ph.D. level environmental psychologist in a supportive writing role.

The work is divided into eight chapters with accompanying front and back essays, an index, and quite a few photos of the eradication efforts. The heart of the book is represented by seven case study chapters chronicling law enforcement raids on various illicit marijuana fields by the Santa Clara County Marijuana Eradication Team and allied agencies. The initial chapter discusses the formation of that team—along with a case study— and the final chapter provides insights into environmental restoration and prosecution. The book’s only defect is the at times excessive mention of team comradeship—but readers must understand the work itself is passionately written and in life-or-death situations faced by the author, who was injured along with some of his comrades from falls and gunshot wounds in the course of their duties, such tactical team bonding and trust is necessary for individual and unit survival.

For SWJ EL Centro purposes, the true value of the book lies in the descriptions of the marijuana grows encountered, the evolution of U.S. law enforcement small units tactics for these environments, and the lessons learned. The reviewer has read literature on macro-level (strategic) analysis of marijuana cultivation by the Mexican cartels throughout many regions of the U.S. and has seen imagery of the growers’ camps but has never really researched the marijuana grows themselves and the tactics required to contend with the armed personnel guarding them. It should be remembered that each of these grows can generate revenues of millions of dollars upon their harvest and those tending these operations have orders to use lethal force to protect them.

Key ‘take aways’ from the work are that marijuana grows on public lands have certain site specific needs— dependent on water, sunshine, terrain, and undetectability— which provide signatures which may help in identifying their locations. These grows can be protected not only by various forms of booby traps—such as snares, trip wires, spikes on boards, and bear traps—along with typically a few growers armed with an assortment of long guns, shotguns, and pistols (with hollow point rounds). They also employ poison oak thickets as barriers to cut off avenues of approach and thus conceivably channel outsiders into the booby trapped entry points. Camouflage is extended not only to the main marijuana garden(s)—in some cases even the drip systems for the plants— but also to the grower camp and the apparel of the growers themselves who will spend many months at a location until the end of the harvest time that begins in August.

For rural-focused law enforcement, the tactical problem posed by armed growers in a marijuana grow is both similar and dissimilar to a SWAT (Special Weapons and Tactics) operation against a couple of armed barricaded suspects. In fact, marijuana grows essentially appear be the forest/scrub equivalents of urban barricades. The evolutionary approach represented by a MET (Marijuana Eradication Team) is to utilize two tactical teams ideally with six members each, though lack of manpower typically precludes the use of full strength units. The first team is a ‘chase and arrest’ unit composed of four personnel with heavier weapons (such as the M1A .308 SOCOM rifle) who coordinate with two members—designated as light runners— who carry only combat hand guns and arresting gear  to have lighter loads so that they can chase down any fleeing growers. The light runners are required to remain together, however, so only one grower can realistically be chased down at any one time. The second team is a ‘quick reaction force’ that supports the point force. It provides long gun coverage and also contains a combat medic that can treat friendly and grower casualties.

Prior to a raid on a marijuana grow an initial reconnaissance is made—sometimes even one is conducted a season earlier— and during the actual raid effective use of stalking and terrain, with downhill movement to contact preferred, is utilized along with airmobile capability on standby for casualty evacuation. Once a grow site is secured, the cutting down and air removal of the crop is conducted along with the destruction of the irrigation system and campsite. Follow on clean up and restoration of the disturbed grow area has, since 2005, also been increasingly conducted by cooperating groups with Fish and Game.

In summation, the Marijuana Eradication Team concept highlighted in War in the Woods represents a much needed tactical innovation to the phenomena of ‘marijuana grow barricades’. At the writing of the book in 2010, the MET innovation was already beginning to generate interest amongst agencies outside of Santa Clara County. These teams appear to be spreading now to some other operational areas with public lands containing cartel marijuana grows.

Additional Note: While researching the Marijuana Eradication Team (MET) innovation for this review, the author came across an interesting piece of information. In June 2011, the Lake County, CA Sheriff’s MET came across an IED (Improvised Explosive Device) booby trap at a entry point into a grow site:

The device consisted of 15 to 20, 12 gauge shotgun rounds taped together with a small circuit board and positive/negative leads attached to a small ATV sized battery. The device also had a trip-wire leading across the entrance to the camp. 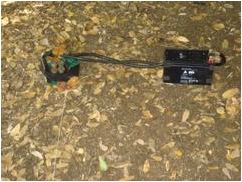 This device may suggest that Mexican cartel countermeasures may be slowly developing to the deployment of our Marijuana Eradication Teams. Further, as suspected, War in the Woods is an important work that have only provided us a tiny glimpse into a much larger phenomena taking place on U.S. public lands not only in California but in many other regions of the U.S.  See this link for a 2009 map of expanding marijuana cultivation within the United States derived from U.S. Forest Service Data. Cartel marijuana grows are said to have proliferated from California— since at least 1995— into five states by 2001 and sixteen states by 2009.

Addendum: Images of additional booby-trap types that may be found at various marijuana grows: 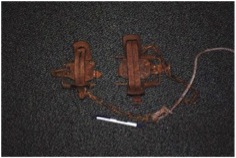 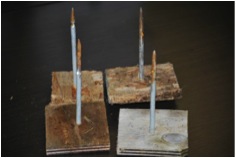