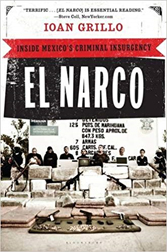 Mexico’s cartels have become a global problem. From the manufacture and sale of drugs, to human trafficking, turf wars, among other criminal acts, narcos have an international footprint. Ioan Grillo’s El Narco: Inside Mexico’s Criminal Insurgency, is an account of how Mexico’s cartels were once drug smugglers who later radically transformed into “paramilitary death squads” (p. 4). Grillo is a journalist and writer who has covered Latin America since 2001 for various media outlets including Time Magazine, the New York Times, Reuters, BBC, Letras Libres and many others. He specializes on drugs cartels, gangs and crime wars and has also worked on documentaries for the History Channel, National Geographic, and Al Jazeera. His background and expertise on the subject are shown throughout the book.

Grillo begins each chapter with a unique tale of someone impacted by narcos. It could be a prison inmate who was once a kidnapper and murderer for a drug gang or a grieving mother who lost a son who was at the wrong place at the wrong time. These introductions at the beginning of each chapter are carefully weaved into Grillo’s overall argument, that these illicit groups are engaging in criminal insurgencies in Mexico. The book consists of sixteen chapters—divided into three parts—acknowledgements, further readings, notes, and an index. The first chapter (“Ghosts”) serves as an introduction and opens with the story of Gonzalo, a prison inmate in Ciudad Juárez. Grillo’s interview with Gonzalo is used to offer insight into the hidden world of these gangs. From there, the author references that this book comes from a decade’s long investigation into Mexican narcos, which includes key interviews with current and former gang members like Gonzalo, families affected by the violence, as well as Mexican politicians and law enforcement.

Part I (“History”) begins with Chapter 2 (“Poppies”), about the poppies in Mexico’s western Sierra Madre that spans 932 miles from the United States border at Arizona. The Sierra Madre Occidental is a mountainous territory with lakes and ravines that “twist and spiral through the Mexican states of Sonora, Sinaloa, Durango, and Chihuahua” (p. 19). The states of Sinaloa, Durango, and Chihuahua are known as Mexico’s Golden Triangle because of the drugs produced there. Mexican soldiers frequently fly over the area in search of marijuana or poppies (opium crops) and burn them. However, when one field is burned, another grows. Grillo dedicates a portion of the chapter to discuss the state of Sinaloa, “the birthplace of the nation’s oldest and most powerful network of traffickers, known as the Sinaloa Cartel” (p. 19). The history of Sinaloa is an interesting read as the author discusses the early opium trade, which brought Chinese immigrants to Mexico to follow the valuable crop and “kick-start Mexico’s first drug trafficking” operation (p. 28). Grillo shows the trajectory of the opium and heroin trade in Mexico and how it became a part of society. This environment became a breeding ground for the likes of Joaquin ‘Chapo’ Guzmán and the ‘Beard’ Beltrán Leyva. This transitioned into Chapter 3 (“Hippies”), which discusses the rise of marijuana and how it became a global commodity. Former President Richard Nixon declared a ‘War on Drugs’ and created the Drug Enforcement Administration [then Agency] (DEA) to fight this war—specifically targeting marijuana and heroin. Grillo goes into great detail covering the DEA’s creation, early operations, and a number of significant busts. Specifically, the author discusses the importance of ‘Operation Condor,’ in which the DEA provided the Mexican government with planes for crop spraying. This operation would later be replicated internationally, such as in Colombia and Afghanistan. However, as Grillo explains, while Mexican crops were badly hit, Colombia seized on the opportunity to fill the void for the high demand of marijuana.

Thus, the rise of cocaine cartels introduced in Chapter 4 (“Cartels”). Grillo discusses the early years of Juan Ramón Matta Ballesteros, a Honduran who was the kingpin of Mexico’s first cartel, and his vast cocaine operation. Chapter 5 (“Tycoons”) follows by delving deep into the rise of Mexico’s three cartels in Tijuana, Juárez, and by the Gulf. Grillo traces the history of these cartels’ bosses and how they became billionaires. As these groups took over for Colombia, a new administration in Mexico vowed to fight back. Chapter 6 (“Democrats”) extensively covers former Mexican President Vicente Fox and his policies to rid Mexico of the cartels. However, the unexpected rise of the Zetas brought more drugs and more violence. Grillo vividly explains the bloody campaigns employed by the Zetas and how they were a new form of violence. “They were not thinking like gangsters,” Grillo writes, “but like a paramilitary group controlling territory” (p. 106). The Zeta style of violence spread throughout Mexico, influencing other groups like La Familia. Decapitations, the use of heavy weaponry and explosives were rampant; groups throughout Mexico “copied the Zetas’ paramilitary way of organizing” (p. 106).

Felipe Calderón inherited Fox’s narco problem, as discussed in Chapter 7 (“Warlords”). Soon after his election, Calderón declared war on the drug cartels. Grillo dedicates a considerable amount of this chapter to Calderón’s life, which is important in understanding why he chose to strike back against the cartels in the state of Michoacán, his native state. Calderón also deployed troops to different states, including Acapulco, Tijuana, and Sierra Madre. While it was successful early on, Grillo notes that in 2008, “the Mexican Drug War intensified drastically and became a full-scale criminal insurgency” (p. 116). The conflict had a major impact on civilians with rising attacks on police and officials. There were firefights in residential areas and massacres in double digits at a time. Grillo transitions to Part II (“Anatomy”), with Chapter 8 (“Traffic”). There is no rest for Mexico’s drug industry because there are those that always want or need drugs and those that will make it and those that will traffic it. Grillo details the cost of cocaine from the plant’s growth, to when it becomes paste, when it comes out of the laboratory as a brick of pure cocaine, and then finally, its street value after it hits international streets. Because there are a number of players involved in trafficking, it is difficult for authorities to determine how much is being produced and trafficked. Overall, this chapter paints a picture of how valuable the drug revenue is to the Mexican market.

But there is a higher cost associated with the drug market and that is the loss of life. In Chapter 9 (“Murder”) Grillo describes murder scenes he witnessed while investigating for this book. He refers to his interview with a man named Gustavo in a jail in Ciudad Juárez. Gustavo was a sicario or assassin whose blood money paid for his family to move out of the slums. Gustavo is an example of how young people are recruited by gangs and traffickers to do a variety of work, such as keeping watch, gathering information, trafficking, housing, among other roles. Chapter 10 (“Culture”) then discusses how the youth as enamored by narcoculture, or narco-culture. At the center of narco-culture is a story of ‘rags to riches,’ or “the great outlaw who defies the Mexican army and the DEA; the benefactor who hands out rolls of dollar bills to hungry mothers; the scarlet pimpernel who disappears in a puff of smoke” (p. 171). Unlike other chapters, Grillo includes photos in this chapter, which are of opium poppies in the Sierra Madre Occidental, men mixing up coca paste in a lab in Putumayo, Colombia, a brick of pure cocaine with cartel markings, soldiers tearing up a marijuana plantation in Sinaloa, drug-ballad crooners ‘Grupo Cartel’ in Culiacán, body messaging (a corpse decorated by gangsters in Sinaloa), among other photos. Following a chapter on narco-culture, it is appropriate to address cartels and their religion, which is discussed in Chapter 11 (“Faith”). La Familia is an early example of a cartel that “indoctrinates its followers in its own version of evangelical Christianity mixed with some peasant rebel politics” (p. 188). Grillo explains the group’s spiritual leader, Nazario Moreno González, or ‘El Mas Loco’ (‘The Maddest One’), who wrote his own ‘bible’ for members to read. Jesús Malverde and Santa Muerte are also discussed in some detail, which points to the cult-like nature of the narcos. The final chapter of Part II, Chapter 12 (“Insurgency”), characterizes Mexico’s cartels as insurgencies. A Small Wars Journal article (“Cartel v. Cartel: Mexico’s Criminal Insurgency”) by John Sullivan and Adam Elkus is Grillo’s point of departure to finalize the overall argument he has been making since the start of the book.

Finally, Part III (“Destiny”), begins with Chapter 13 (“Prosecution”), detailing how law enforcement builds cases to target drug traffickers. The overarching issue, however, is that when one kingpin is eliminated, his soldiers continue the work and the drug trade—and war—continues. Chapter 14 (“Expansion”) attempts to offer statistics on the revenue and how much drugs is actually trafficked. As Grillo notes, it becomes difficult to offer any reliable numbers. Narcos profit from outlets other than drugs, such as kidnapping, which is addressed in Chapter 15 (“Diversification”). Grillo explains that “organized crime has two basic functions: it can offer a product that legal businesses cannot provide; and it can steal or extort” (p. 262). Cartels, like Los Zetas, have targeted everyone from the rich to the poor, even migrants. Grillo also makes note of the fact that politicians have long played a part in continuing the drug war and violence. Particularly in extortion practices, “the frightening implication is that as El Narco takes over the government’s role as extortionist, it becomes even more of a shadow state, the real muscle and power behind the façade of elected officials” (p. 272).

The final chapter of the book, Chapter 16 (“Peace”), is Grillo’s recommendation that involves the international community to develop a “group of improved policies in Mexico.” The drug wars in Mexico are a case study in criminal insurgency, as Grillo has shown in his book. Even though this book was published in 2011, it has undertones that are still relevant today in Mexico’s ongoing problem with narcos. As Grillo notes, “Mexican cartels have clearly morphed into organizations with a capacity for violence that goes way beyond the bounds of criminals—and into the realm of national security” (p. 205). The threat needs to be better understood by law enforcement on both sides of the border if any change is to occur. The minor limitation to this book is the author’s narrowed focus on a few cartels. Additional examples would have benefited the reader in understanding the full scope of narco history and how far it has come. Overall, this book is a great read for those interested in the inner workings of Mexican cartels and how they have grown in strength and influence. Grillo provides fascinating details of the lives of former gang members who have committed horrific crimes and features them as backdrops to the bigger picture; that is, the tragedy of the drug wars and how the violence has spilled over borders while the drugs continue to claim the lives of countless individuals. El Narco is an insightful book as the author directly confronts the problem and calls for global governments to do the same.