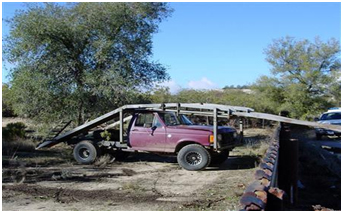 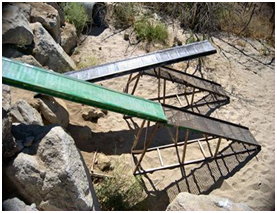 Undated photos provided by the U.S. Border Patrol. Both images are from the south side of the border fence near Campo, CA.

…Ongoing measures to erect 670 miles of new fence on the border are credited with helping to cut arrests to some 870,000 last year from 1.1 million. Nevertheless, smugglers are trying and, in many cases succeeding, in breaching every kind of barrier thrown in their paths.

Sturdy steel posts have been sunk in the ground in many areas to stop vehicles crossing north, although drug traffickers have responded by building elaborate vehicle ramps to drive cars over the top, border police say.

“It’s like the old show ‘The Dukes of Hazzard,’ cars flying through the air,” said James Jacques, a supervisory Border Patrol in San Diego, Calif.

One such attempt was foiled. “It took the man a while, and by the time he got to the top, we were waiting for him,” said Andrew Patterson, a Border Patrol agent in Yuma, Arizona… 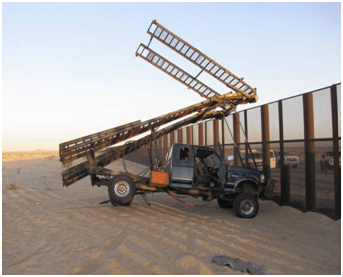 SAN LUIS RIO COLORADO, Son. — The recent use of a large folding ramp to allow drug-carrying vehicles to leapfrog the border fence goes to show the ingenuity of the smugglers, says a Mexican police chief in this city.

And Federal Preventative Police Commander Gaston Loaiza says drug traffickers will only get more sophisticated and ingenious in their methods of moving their product into the United States and on to users.

His comments came days after Border Patrol agents on patrol in the Barry M. Goldwater Range east of Yuma discovered the folding ramp extending over the border fence from a large truck parked on the Mexican side. Agents found the ramp while chasing a Jeep Cherokee that apparently had just used the ramp to carry across 1,000 pounds of marijuana.

“We believe that the ramp could have been used previously,” Loiza said, “but it is a sign that there is a lot of drug smuggling activity in that area.”

The area is so heavily used by traffickers, he added, that the day after the discovery, Mexican federal police officers arrested two people as they were preparing to cross on foot in same location with a total of 20 kilos of marijuana strapped to their backs.

The fence is part of the U.S. government’s efforts over the past decade to fortify the border against alien and drug smuggling through the use of added barriers and surveillance technology and more agents. 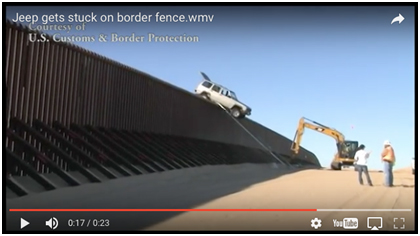 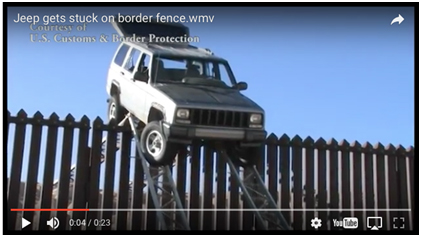 It was what appeared to be a midnight smuggling run pitting a Jeep Cherokee versus the 14-foot border fence.

Suspected smugglers on Tuesday tried to go up and over the barrier at California’s Imperial Sand Dunes on a makeshift ramp, not an uncommon tactic employed by Mexican smugglers since border fencing was erected in the area in recent years.

But the Jeep high-centered on the way down, leaving the rear wheels spinning in the air.

When U.S. Border Patrol agents arrived minutes later, the vehicle was hanging from the barrier, suspended between Mexico and California. The hatchback of the Jeep was open, leading authorities to believe the suspected smugglers may have somehow retrieved the drugs before fleeing.

Their ramp, U.S. Border Patrol authorities said in a statement, was “not quite up to the task.” 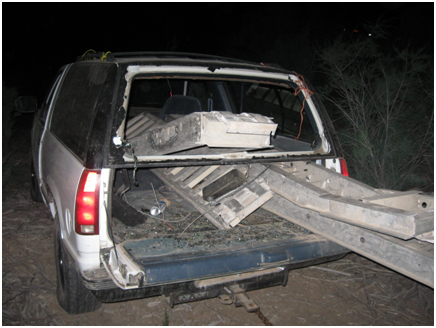 Yuma Sector agents pursued a Chevy Tahoe that used ramps to cross a shallow portion of the Colorado River at the U.S.-Mexico border. The two suspects, unable to get the vehicle back over the barrier once they turned back, abandoned it and fled into Mexico on foot. Officers discovered 23 tightly wrapped bricks of marijuana (281 pounds) in the vehicle and followed tire tracks to a second vehicle that was transporting heavy metal ramps like those used to get the Chevy Tahoe over the border barrier.

Who: Although official credit is not being given to any particular cartel for these incidents, the locations and time frames where these modified vehicles and vehicular ramps were found are consistent with Sinaloa Cartel drug trafficking territory.

What: The use of ramps to allow cartel vehicles to scale the U.S. border fence with Mexico.

When: The modified vehicles and ramps were found on multiple occasions between March 2008 and October 2012.

Where: All of the modified vehicles were found on the Mexican side of the border with ramps extended into the U.S. The first truck found in 2008 was located a few yards south of the border near Campo, California. The second truck (2011) was found east of Yuma, Arizona. The Jeep (2012) was abandoned west of the Arizona-California state line in sand dune desert land.

Why: As heightened border control efforts successfully stop more drug loads at high-traffic border crossing checkpoints and additional physical barriers are erected to stop vehicles from driving through the border via the vast desert land, traffickers have had to become more creative. When utilized in areas with less frequent border patrolling, the ramp assists prove to be an at times effective means of delivering truckloads of drugs into the United States undetected.

Analysis: The United States Border Patrol first found a modified pickup truck with elaborate folding ramps by at least March 2008. Once extended, the ramps were used to lift vehicles packed with bales of marijuana over the top of border fencing. When the modified truck was found, the customized extendable ramp was resting on the United States side of the border fence. In April 2011, while chasing a Jeep Cherokee carrying 1,000 pounds of marijuana, Border Patrol agents discovered another modified pick-up truck. The truck’s ramp was extended over the border fence from the Mexican side. The Jeep Cherokee was believed to have just used the ramp to be lifted over the border into the United States. More recently, in October 2012, drug smugglers tried to use a temporary bridge-like structure with extended ramps to lift a Jeep truck over a 14-foot-high border fence just after midnight. The vehicle high-centered on the way down, leaving the rear wheels spinning in the air. Smugglers abandoned the vehicle and fled back into Mexico when agents approached. The truck got stuck on a floating fence that moves with the sand dunes. Each of the modified trucks and their extendable ramps were not overly sophisticated from an engineering perspective. The fielding of these ramps, however, speaks to the creative and innovative thinking of the Sinaloa Cartel that seeks to traffic drugs into the United States. The ramp assists spotlight the weaknesses of border fencing and physical barriers that are either not patrolled or under remote surveillance by U.S. border patrol personnel. With only three vehicles found since 2008, however, the ramp assist method appears to be a little used technique to deliver drug loads undetected into the United States. The opportunity cost of utilizing this method vis-à-vis other more effective over, through, and under the border trafficking methods suggests that is has for the most part been superseded. Note—A variant on this trafficking approach took place in April 2013 when a Chevy Tahoe and another vehicle utilized heavy ramps to cross a fording area of the Colorado River at the U.S.-Mexico border.