Transcripts of a clandestine hotel interview of ‘El Gordo’ conducted by Voeten and Engels, two Dutch documentary filmmakers—one of whom is a cultural anthropologist who recently completed his PhD focusing on the Mexican drug war, at Hotel El Mayo, Culiacán, October 2016. It is an excerpt from the PhD thesis by Teun Voeten, titled: The Mexican Drug Violence: Hybrid Warfare, Predatory Capitalism and the Logic of Cruelty. 280-283. See also: Maaike Engels and Teun Voeten, Sacrifice. Belgian Canvas TV, 2017. 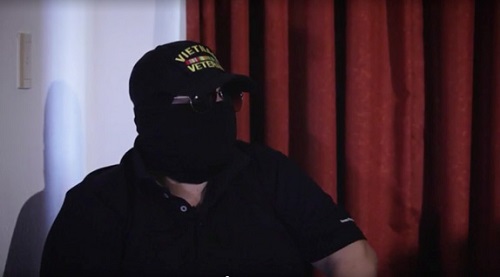 El Gordo, which is not his real name, is an active sicario working for the Sinaloa Cartel in Culiacán. He agrees to an interview and to be filmed but masked. Before his arrival at the hotel, a police patrol checks the vicinity of the hotel and stays guard a block away. El Gordo confirms that this is his private security arrangement. Later during the interview, he discloses that both of us interviewers have been followed and checked since our arrival at Culiacan airport. ‘You could have been DEA agents’, he explains.

He does not want his apodo, nickname, to be mentioned but it is a terrible disease that has claimed many lives, just like he himself, he says while he smiles. El Gordo is an intelligent and eloquent man of good upbringing. Actually, he has a business, and does not need to kill for economic reasons. ‘Many times, they say it is out of poverty and because of hardships that people enter the life. With me, that was not the case. I lived in one of the best neighborhoods in town, in a very luxurious house.’ What he does is eliminating misfits, ladrones, people who steal, kill, kidnap, and terrorize the neighborhood. He is in fact engaging in limpieza social or social cleansing. Interestingly, El Gordo comes from an upper middle-class family. In their upscale neighborhood many narcos were living as well. At school, he was a good student and proceeded to get college degrees in business administration and law. He has a pilot’s license as well. It was at school that he befriended many children of capos, as they were his class mates and neighborhood kids he was hanging out with. Still, he never had any inclination to follow a career in crime.

His first kill was ‘not because someone paid me, nor someone gave me an order, but to save my life.’ With a narco friend, he visited Guadalajara. They were ambushed by a few armed men, obvious enemies of his friend. His friend was shot dead. Being a collector and lover of arms, he knew how to use a pistol and defend himself. He was wounded, but survived. In the hospital, they came looking for him, but associates of his friend had made sure he was treated discretely. El Gordo talks about this incident calmly and composed. He has no qualms whatsoever he had to kill people in self-defense. ‘I do not feel anything from them. They wanted to do damage to me. If I would not have reacted in that way, I would have been dead.’ He does not want to elaborate how he got involved with the cartel, but tell they are always on the lookout for intelligent, well-groomed people with a good education and no alcohol or drug abuse. Of course, he was already introduced through his school friends in very high circles and during the shoot-out he had proven to be a brave and capable fighter.

Talking about sicarios, El Gordo says that ‘contrary to the groups that are with us’, these people are people plagued by social, personal, and substance abuse problems. ‘They never studied, they have family problems, their father is a drunk or drug addict, divorced families, they have much anger in them.’ These people are amateurs, says El Gordo. ‘They don’t have discipline, they get carried away in a dream world with fast money and flashy clothes and shiny cars.’ Intelligence, restraint and abstinence from alcohol and drugs are the most important qualities of a sicario, according to El Gordo. Indiscriminate use of violence can be contra- productive. His most important task is to neutralize anti-social elements and sometimes only words, or just the threat of violence will suffice. ‘If I say “Hey, you have a problem, we need to talk. If not, things will be tricky”, in many cases, we can solve many issues without violence.’

Still, he is far from a pacifist. He laughs when he mentions his nickname. ’You know how many people died from that?’ He has a cynical sense of humor. ‘Some people came looking for me. I sent them off asleep and gave them the wooden pyama’ (slang expression for coffin). At the same time, he combines an ethical code of honor with certain sensitivities. ‘We never shoot people in the back. We are not cowards.’ At the same time, he never looks people in the face at the moment of killing them. ‘Their look will haunt you forever.’ El Gordo does not perform rituals for his work. He does not worship Santa Muerte, nor does he ask God’s help for a hit. ‘It seems illogical, but many people do it. I think it is not fitting to ask the help of God to kill a human being’. Still, he shows some respect for the people he killed, like lighting a candle after they have been killed. In his mind, this might give the spirit of the deceased some peace.

Sometimes, when he is trying to go sleep, he sees the people he has killed. ‘They sit in a chair a look at me. They look normal, not bloody at all. And they don’t scare me. Sometimes I light a candle, sometimes I put on the light, then they will go away. I roll over and fall asleep.’ As for the people he killed, they are anti-social element that ‘cause damage’ to decent ‘innocent’ people. ‘People that have killed children people that rob, rape and murder.’ He tells the story of a neighborhood store that was terrorized by a gang. The store owner asked people associated with narcos for help. El Gordo solved the problem. Because the police are sometimes not intervening, people like him have to do the dirty jobs to get rid of these elements. He confirms that many civilians have more confidence in organized crime as compared to the authorities. He also confirms that many people are directly or indirectly involved with narco-trafficking. ‘There is a lot of money going around.’

He does sometimes engage in torture to extract information. ‘It is an easy way to know if someone did something or not.’ He does not feel he is committing crimes, since he is in a way protecting society from criminal elements. ‘I do not feel like a judge. But we are a necessary evil. And I don’t feel guilty. Because we only do it with people that deserve it.’

Like most sicarios, he has a strict separation between work and private family life. His children do not know his line of work. ‘They never see me with weapons. They think I am a business man.’ Indeed, he actually still is a businessperson. His biggest fear is being kidnapped and made to disappear. ‘I am afraid for my family, If I am dead, I am dead, but for my parents, wife and kids, the uncertainty when there is not a body... That must be a torture for them.’

In 2016, Voeten and Engels made the documentary ‘Calais: Welcome to the Jungle’, a multilayered documentary on a squalid refugee camp in Northern France (www.calaisjungledoc.com ). For Canvas TV in Belgium they made ‘Sacrifice’ in 2017 as a short documentary on rituals in the Mexican Drug Violence for which they interviewed sicarios in Ciudad Juárez and Culiacán.