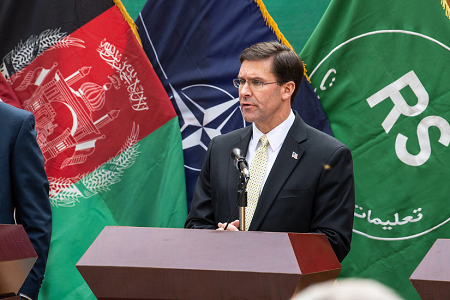 A negotiated political agreement among Afghans is the best path to a peaceful government in their country, Defense Secretary Dr. Mark T. Esper said during a visit to Afghanistan's capital of Kabul.

Until that agreement is reached, "we will continue to pursue an aggressive military campaign against the Taliban and terrorist groups that continue to conduct violence against the people of Afghanistan," the secretary said yesterday.

In addition to his first trip as defense secretary to Afghanistan, Esper also is visiting Saudi Arabia, Iraq and NATO headquarters in Brussels.

Reflecting on his trip to Afghanistan, in which he engaged with U.S. and Afghan officials, Esper said, "We are making good progress toward our common goal — that is, to ensure that we and our allies never again face terrorist attacks from Afghanistan." 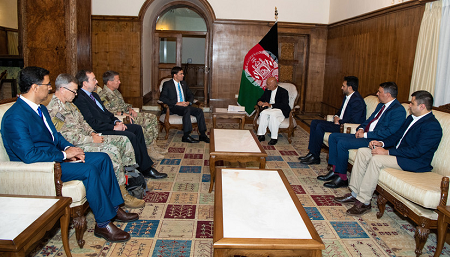 The secretary and Afghan President Ashraf Ghani spoke earlier in the day about the important relationship between the two countries. "The United States and Afghanistan have a strong security partnership built over many years of cooperation and shared sacrifice," the secretary said.

That bond was forged in battle, and it grows even stronger as the combined effort continues, Esper added.

The United States remains committed to Afghanistan's success, the secretary said, adding his thanks to Army Gen. Austin Scott Miller, commander of NATO's Resolute Support Mission. He also commended the "great work" the multination coalition is bringing for peace and stability in the country.

"I was impressed by the skill and professionalism of those brave soldiers," he said. "Counterterrorism operations remain critical to our efforts to achieving peace and ensuring terrorist organizations cannot find safe haven in Afghanistan." 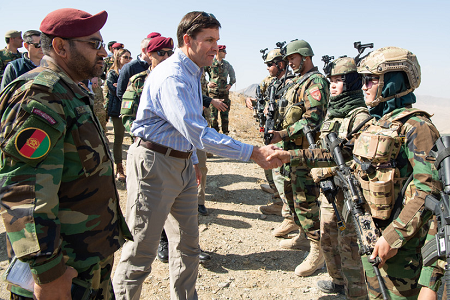 The secretary also commended the Afghan national defense and security forces for their "apolitical approach" and achievements while providing security to the recent presidential elections.

"This is an example of the important progress being made by [the Afghan forces] to protect the Afghan people from the senseless violence of Taliban and terrorist groups," he noted.

Regardless of the outcome of the election, Esper said, the U.S. security partnership with Afghanistan will remain strong.

"The United States remains fully committed to helping Afghans create a peaceful, stable and prosperous Afghanistan and is supporting the Afghans' efforts led by the government towards peace," the secretary said.

Esper said Afghanistan will be on the agenda when he and his NATO counterparts meet in Brussels. "I look forward to sharing with our allies what I have seen here, and expressing our continued support to this important mission," he said.