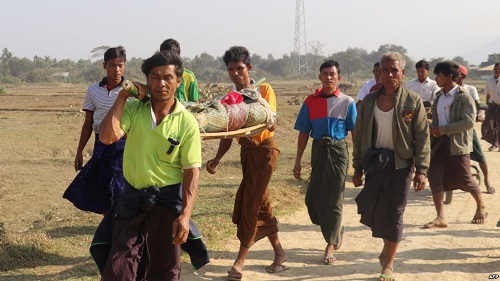 The U.N. Human Rights Office says more than 20,000 civilians in Myanmar's northern Rakhine State have been forced to flee their homes in recent weeks in the face of escalating fighting between the Myanmar military and the ethnic Rakhine Arakan Army.

The U.N. condemns what appear to be indiscriminate attacks against civilians by the military, as well as violence perpetrated by armed fighters in Rakhine state.

It says it has received credible reports of the killing of civilians, burning of houses, arbitrary arrests, abductions and other forms of abuse.

U.N. Human Rights spokeswoman Ravina Shamdasani said that on April 3 two military helicopters fired on civilians tending cows and paddy fields. She said at least seven civilians were killed and 18 others injured in the incident.

“As the international community is taking steps towards accountability for crimes against civilians in previous years, the Myanmar military is again carrying out attacks against its own civilians - attacks which may constitute war crimes. The consequences of impunity will continue to be deadly,” she said.

Shamdasani said all victims in this week’s attack were Rohingya Muslims. But she noted civilians of various ethnicities have come under fire in Rakhine and neighboring Chin state.

She told VOA the Rakhine Arakan Army that is fighting the Myanmar military recruits mainly from among the ethnic Rakhine Buddhist community. She said the group and its issues are distinct from the Rohingya Muslim community.

“This is an armed group that was formed, I believe, almost a decade ago and they have got their own grievances about the lack of proper governance, consultation by the central government with these communities. They have economic grievances - all sorts of gripes with the government about injustice that they have been suffering through the years,” Shamdasani said.

The U.N. spokeswoman said their complaints are quite different from those of the Rohingya Muslims in the same region, who are suffering from systematic discrimination.

The U.N. rights office is calling on the warring groups to immediately stop their hostilities, to ensure civilians are protected and to grant humanitarian access to all areas of northern Rakhine.