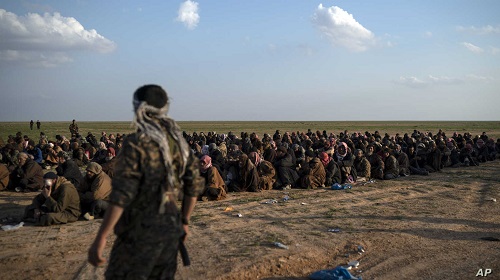 PENTAGON - A growing number of fighters and followers captured during the final battles to defeat the Islamic State terror group’s self-declared caliphate are being released in Syria, with some facing justice and others being given a chance to restart their lives.

Once held under heavy guard in makeshift prisons or in camps for displaced persons, dozens of fighters and hundreds of so-called IS-affiliated persons have made the journey home since late last year, according to U.S. and U.N. officials.

And while the prospect of allowing some former IS fighters and followers to mingle in communities freed from the terror group’s grip has, in some cases, raised tensions, U.S. officials, so far, have been pleased with the results.

“We see these SDF [Syrian Democratic Forces] return-and-reintegration initiatives as positive,” a State Department official told VOA, asking for anonymity because of the sensitive nature of the program.

“They have been successful in holding fighters to account and also reintegrating some individuals and a significant number of families back into Syrian communities, usually under tribal and family oversight,” the official added.

About 4,000 captured Syrian IS fighters are thought to be in SDF custody, while the number of noncombatants — women and children and others — held in displaced-persons camps still number in the tens of thousands.

U.S. officials were unable to provide any information on exactly how many IS fighters and IS families have been allowed to leave SDF custody.

The SDF also declined to share specifics, but an official speaking on the condition of anonymity because he was not authorized to talk about the matter told VOA, “Their numbers are very small.”

“Our court system releases those who are not involved in committing crimes and terrorist acts,” the SDF official added. “After their release, usually Arab tribal leaders get involved to ensure that the freed individuals won’t pose any terror threats in the region.”

The London-based Syrian Observatory for Human Rights reported that at least 49 captured fighters have been released to the Syrian communities of Hasakah, Raqqa and Deir el-Zour since the start of the year.

They join an untold number of captured fighters released starting in July and August of last year, most of whom were held accountable through local or tribal judicial processes.

That judicial process included “sentencing fighters who are proven to have committed crimes,” a State Department official told VOA at the time.

U.S., UN and SDF officials admit there has been almost no effort to deradicalize the few thousand IS family members, most of them children, who have left the camps. They say, despite the need, there have not been sufficient resources to run such a program.

Even trying to provide the children with a basic education has proven difficult.

“There is a lack of interest from families,” a U.N. official told VOA, citing the nonreligious nature of the curriculum.

But not everyone is concerned about the lack of deradicalization programs and services.

“We know many people who had joined,” said Telal Hilal Alsibat, an official with a tribe near Raqqa that has taken back two groups of families.

“When we asked the widows of ISIS members, they answer that their husbands had joined ISIS to have a job to make a living; therefore, the rest of the family had to go with them,” he said through the Rojava Information Center.

“While we do not follow every individual that has gone through these processes, we are not aware of a movement back to ISIS as a result,” a State Department official told VOA.