The sixth of a series of blog posts on Urban Disasters: Readiness, Response, and Recovery by Russ Glenn. 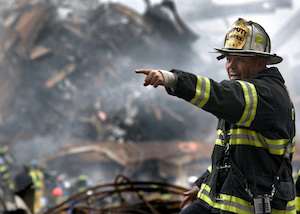 Key Point #1: Preparation for any urban disaster helps to prepare an urban area for catastrophes regardless of cause or type.

Key Point #4: Plans must be executable.

Key Point #5: No plan will survive contact with the disaster.

Key Point #6: Information is the currency of success

Key Point #8: The plagues of bureaucracy, poor delineation of responsibilities, and criminality are remoras on any disaster…except the relationship isn’t symbiotic.

Building on our previous post, we should note that instances in which individuals demonstrate a lack of common sense during urban disasters are regrettably not limited to members of the public or politicians. Too many public figures, medical personnel, and members of first responder organizations demonstrated similarly inexplicable behavior at the height of the COVID pandemic. In contrast, over seventy years before, members of the public and authorities alike stepped-up during New York City’s 1947 struggle with smallpox:

The public was treated as an ally. [Medical historian Judith Levitt recalls,] “in two weeks, five million New Yorkers were vaccinated.” Coercion was used elsewhere: “The drug companies were a little less cooperative until Mayor O’Dwyer locked them into City Hall and said you are going to produce more vaccine, and you’re going to do it very quickly, or you’re not leaving this building, and they surprisingly agreed…. It was a voluntary vaccinations program…. Public compliance was incredibly high. Now I don't have to remind you that this is immediately post-World war II, and that did have something to do…with the level of organization in the city and the cooperative effort.”[1]

Why highlight on this point? Though we like to think ourselves and fellow citizens savvier today than those generations ago, such an assumption is ill advised as we plan for and respond to urban disasters today. Why the seeming backward slippage in common sense?[2] The examples below will show that the type of urban disaster has an influence. Timing can as well. As noted in the quotation, America’s citizens in 1947 were used to sacrificing for the public good whether as military personnel or civilians on the home front. Part of it was also the quality of the nation’s command, leadership, and management at the time.

There is pretty good support for an argument that most urban disaster failures have their roots in command, leadership, and management shortfalls. Bureaucracy plays a vital role. Qualified, capable, well-intentioned, and effective organizations and individuals are essential. Put differently, good government and good governors are a good—a very good—thing.

Preparations for and response to the September 11, 2011 attacks on the United States provide a relevant example, unfortunately in the sense of demonstrating the costs when one or more of the above is lacking. The horror of the day is evident to any who was there, watched from a distance, or followed subsequent events, but the extent of the destruction in the vicinity of Ground Zero is worthy of note because it in microcosm reflects what urban victims of the 1666 London fire, 1923 Tokyo earthquake, 1945 bombings of Hamburg and Dresden, and many other disasters throughout history have experienced on much grander scales. The title of Jay D. Aronson’s Who Owns the Dead? The Science and Politics of Death at Ground Zero hints at some of the troubles confronted during the response to and recovery from that dreadful day. He also notes just how disorienting urban disasters can be—have repeatedly been—since fires, tremors, raids, volcanos, or other forms of devastation have visited since humankind first created urban areas. “People who were on the scene just after the towers collapsed,” Aronson observes, “report being awestruck by the devastation with which they were confronted. Life-long New Yorkers found themselves completely disoriented on streets that they had walked innumerable times before.”[3] And this regarding what was at most a postage stamp-sized area on the envelope of America’s most populous urban area. Imagine the disorientation when a metropolis suffers widespread devastation akin to our previously noted cases.

Disorientation gave way to disorganization and inter-organizational competition around Ground Zero. Like our earlier-noted shortfalls in vetting NGOs in 2016-17 Mosul, Aronson reported lack of a credentialing process until five days after the attack, meaning “large numbers of unnecessary personnel became involved in the search and rescue effort, making it difficult to work efficiently and potentially putting peoples’ lives at risk”[4] as well as expanding the number of those exposed to later respiratory or other ailments. One (seemingly obvious) lesson for urban authorities planning for large-scale disasters: identify needs, allocate responsibilities, train personnel, and put procedures in place that will be necessary once catastrophe comes to call before it does so. The New York Police Department’s lack of in-house expertise when it came to gathering biological samples and related information led to confusion as forms pertaining to the identification of remains failed to request all needed data. Multiple forms were at times filled out for the same person, making identification and notification further problematic, this in addition to other (perhaps less avoidable) errors such as wrong reporting of birthdates or spelling of names.[5] FEMA (the Federal Emergency Management Agency) and US Army Corps of Engineers assisted local authorities, but the federal government never nationalized the site. Oversight of rescue, recovery, and other operations consequently devolved to the New York City Fire Department (FDNY), a supremely dedicated but interested party given the high number of firefighters lost in the Twin Towers collapse. This lack of an official, overarching manager left no one to address inter-organizational tensions that arose as response and recovery work progressed.[6]

Also telling: Rivalry between the NYPD and FDNY had been allowed to influence the degree of cooperation and compatibility of the two organizations in the years prior to 9/11. The two organizations competed for funding and other resources, a situation that reflects on management by city authorities at higher echelons and in-place policies.[7] Among those leaders whose pre-event decisions raise questions was New York City Mayor Rudy Giuliani. Advisors resisted his efforts to move the emergency operations center (EOC) located at a well-equipped and secure facility across the Brooklyn Bridge from Manhattan to 7 World Trade Center. He nonetheless pushed for the relocation, emphasizing his desire that the EOC be within easy walking distance of City Hall. Convenient perhaps, but unwise given a result that put multiple crisis-crucial sites within a too-short distance of each other.[8] It’s not as if the mayor did not have the opportunity to learn from urban disasters elsewhere. The 1985 earthquake that struck Mexico City knocked out many facilities that were vital to an effective response given their over-concentration in the central part of the megacity. Among those were twenty-seven hospitals destroyed or damaged and a resulting 40 percent of the city’s medical capacity disrupted. Damage to a single downtown building also interrupted local, national, and international telephone service.[9]

Anyone familiar with bureaucracies knows that critical decisions by select individuals are often key to overcoming flawed bureaucratic policies, procedures, and personalities during a crisis. Personal relationships are as crucial during response as they are to effective preparations and recovery. Such individuals and such relationships blow through or manage workarounds to obstacles stolid officialdoms put in place.[10]

A parting observation: the larger the urban area and greater the disaster, the more likely assistance will come from individuals and external organizations less familiar or unfamiliar with the city’s governing structure and its key decision-makers. Plans and crisis response procedures should acknowledge this eventuality. Hosting authorities need to ensure high-quality liaison personnel and coordinating organizations assist those lending a hand.[11]

Key Point #17: Getting the response structure right is vital.

As command, leadership, and management are fundamental to success, it is essential to have a functional and supportive organizational structure for orchestrating an effective disaster response. One benefit in most post-disaster cases: local and higher-level governments will still be in charge. Even governments less than desirable in terms of capability and commitment can help given their understanding of local conditions, expectations, location of important records, and the identity of community and influence leaders both formal and informal. It is an advantage in many but unfortunately not all cases.

While it is in most cases desirable to work within the structure of an existing (or previous) government, those responding in disaster’s aftermath need not slavishly adhere to in-place configurations. “It may have sounded great in theory to follow the Iraqi system,” Andrew Alderson observed when writing of Basra, Iraq early in the 21st century, “but one of the reasons why the centralized Iraqi government hadn’t worked well was precisely because they had nineteen different groups reporting into the centre to be told what to do.”[12] Flawed government structures can be inherently inefficient if not ineffective. Those deliberately bloated or otherwise hindered by unneeded hierarchical layers also burden responding organizations with excessive liaison responsibilities. Both immediate response efforts and long-term urban health may be helped by working with urban authorities to modify pre-disaster structures when alternative approaches look to prove inadequate. The timing and extent of changes should be carefully considered, however. Overly ambitious alterations in the days immediately following an urban disaster can exacerbate rather than mollify crisis conditions.

Even a government as sophisticated as Japan’s found itself struggling to orchestrate the response and recovery to its 2011 earthquake-tsunami-reactor calamity.  The national government established the Ministry of Recovery to collaborate with local and prefectural governments. Yet overlapping responsibilities between the Ministries of Industry; Agriculture, Forest, and Fishery; and that of Land and Transportation hindered urban and rural responses alike. Similar to the funding shortfalls that plagued London in 1666 and Tokyo in 1923, Ministry of Recovery funding never equaled its leaders’ ambitious response plans.[13] Bureaucratic structures suitable for day-to-day operations in times of routine can crack and break when disasters visit. Effective responses may demand changes difficult to make under the best of circumstances and virtually impossible to accomplish if not considered in pre-response planning and exercises.

[2] While there has certainly been slippage in some aspects of urban disaster decision-making, medical and political personalities’ absurd responses to the post-WWI flu pandemic in the United States and responses during other historical calamities provide close company to dubious 21st-century choices. For example, see John M. Barry, “How the Horrific 1918 Flu Spread Across America,” Smithsonian Magazine, November 2017, https://www.smithsonianmag.com/history/journal-plague-year-180965222/.

[6] Aronson, Who Owns the Dead?, pp. 32, 37, and 38. Aronson reports, for example, “Firefighters offered differential treatment to their own victims compared to other uniformed service victims and civilians. Each time that remains of a firefighter or firefighting gear was located, the entire Ground Zero recovery effort ceased. All workers at the site, whether uniformed service personnel or civilian construction workers, paused and saluted the fallen firefighter. If remains were recovered, they were wrapped in an American flag and paraded through a lineup of Ground Zero workers. These remains were immediately sent to the OCME [Office of the Chief Medical Examiner] via ambulance rather than being placed in a refrigerated trailer on site for later transport to the OCME.” He goes on to write, “people familiar with the recovery effort say that FDNY could have benefited from more professional anthropological and archaeological expertise on site,” to include anthropologists who volunteered their services.

[7] Jay D. Aronson, Who Owns the Dead?, 33. Aronson is but one of several sources bemoaning lack of greater cooperation between the two organizations. It has reportedly improved in subsequent years.

[11] Hilary Synnott, Bad Days in Basra, New York: I.B Tauris, 2008 provides an excellent and at times entertaining example in this regard. Synnott writes of having to deal with the Coalition Provisional Authority during international efforts in early twenty-first-century Iraq.

[12] Andrew Alderson, Bankrolling Basra: the incredible story of a part-time soldier, $1 billion and the collapse of Iraq, London: Robinson, 2007, p. 64.

The previous installation of this series “Responding to Urban Disasters, Post One (Post 5 of 14),” appeared on 22 January 2023.