Central Asia is the staging ground for a new digital Great Game. The key players include Russia, China, Europe, and the US, along with a rash of Central Asian actors. What happens there has implications not just for the region, but the future of the Internet. One of the reasons why Central Asia’s assuming more strategic importance is because of the digital transformation occurring across the region. Their digitalization is part of a deeper historical commitment to technology-driven modernization stretching back to the twentieth century Soviet Union. Today, the region is registering a dramatic increase in internet roll-out, mobile broadband connections and social media users. 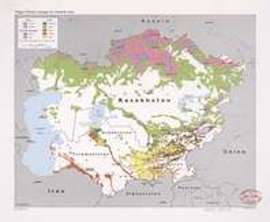 Central Asia’s digitalization is generating opportunities, but also risks. The onboarding of Central Asians is occurring amidst a complex backdrop of top-down secular authoritarianism, bottom-up agitation for more progressive democracticization and a contest between moderate and hardline Islam. Digital transformation, then, could accelerate digital authoritarianism. Indeed, there is a real push from China, Russia and the US to shape the wider technology environment, with profound implications for the future of civic freedoms and digital rights. And as more Central Asians go online, their exposure to digital harms, including violent extremism, is increasing.

New SecDev Group-led research is shining a light on the scope, scale and dynamics of online violent extremism across Central Asia. For one, while persistent, violent extremist actors have a modest online footprint: a small number of entities are disproportionately responsible for a high proportion of harmful content. Related, extremist groups are using third party networks to amplify their reach and moving between platforms to avoid take-downs. What’s more, their appeals are linked to regional grievances, from Afghanistan and Syria to Muslim grievances in France and the treatment of Uyghurs in China.

A managed risk approach is critical to prevent, disrupt and reduce online violent extremism in Central Asia. Too often, interventions are narrowly targeted, having comparatively limited impact and potentially making the problem worse. The spread of violent extremism is connected fundamentally to wider geopolitical, regional and domestic factors such as the continued repression of minorities in Xinjiang and the impending withdrawal of NATO troops from Afghanistan. These tensions will continue to stoke grievances and serve as a focal for radicalization. Ultimately, intervention strategies must account for these political realities in their design.

While appealing, police-led interventions and platform-led strategies focused on taking down content will not successfully deter online violent extremism. To the contrary: they can potentially incentivize extremist groups to move to more obscure platforms and adapt their strategies, generating new challenges. Interventions designed to disrupt online extremist groups and remove radical content need to be mindful of the unintended consequences of aggressive take-downs. For example, overzealous efforts can undermine media independence, ramp-up indiscriminate surveillance and trigger anti-terrorist legislation and operations that curb rights.

Several Central Asian governments are actively exploring ways to adopt more stringent surveillance and censorship laws and to make use of artificial intelligence and other intrusive surveillance technologies ostensibly to “fight terrorism.” There is a danger that digital transformation and smart city initiatives could lead to indiscriminate surveillance, with dangerous implications for civic and human rights. What is needed now more than ever are approaches that do not focus reservedly on violent extremism, but rather emphasize the prevention and reduction of digital harms. European and US partners have a key role to play here, not least in strengthening inclusive digital transformation, promoting independent and high quality online media and bolstering digital literacy.

One way to disrupt the risks of digital harms is by applying lessons from public health. This begins by continuously diagnosing the online threats, mitigating risk factors, reinforcing protective factors, and testing out measures to evaluate their outcomes. The US, Europe, and multilateral organizations can work with Central Asian public authorities, social media platforms and representatives of civil society to double down on inclusive digital transformation that simultaneously manages digital harms and short circuits the transition towards digital authoritarianism. This will require applying a wide range of measures in partnership with gatekeepers—trusted brokers—to deliver safer and secure online environments.

I completely concur! Nowadays, businesses from practically every industry are moving their operations online to strengthen their relationships with clients and establish their brands. Digital marketing also offers insights into the audience base, which enables organizations to enhance and adjust their marketing strategy as appropriate. You can click here to discover more. Due to these factors, there is an increase in need for qualified digital marketing specialists who can complete this duty effectively.

The software says exclusively relevant. Each of reduced attributes happen to be formulated with various capture certification. I like the application many. handyreparatur berlin

Digital harms are the major…

Digital harms are the major concern of social networks in Central Asia. Those cyber crimes are committed on a regular basis not just by locals but even by those people who move to the region. They may be looking for a better life, job, or find love abroad. Get finneas o'connell LA Address some interesting things related to technology. Some may be tempted by attractive promises of fast money or attractive women. Nevertheless, they might be facing problems while living in this part of the world which could lead to several problems and dangers.

I appreciate your thoughtful…

I appreciate your thoughtful post. The subject of expertise in digital media is rapidly developing. Any company that sells goods or services online needs to use digital marketing, and the demand for marketing experts is rising globally. A broad set of talents is necessary for an online marketer to be effective. Visit https://www.dashtech.org/how-to-become-a-digital-media-specialist/ for more information on how to become a digital media specialist. When you're playing the game of digital marketing, follow the crowd and venture into uncharted territory. For the purpose of enhancing content and sales, digital marketers collaborate closely with advertising departments. This rapidly expanding sector combines communication and commerce under the guidance of skilled experts in digital media!