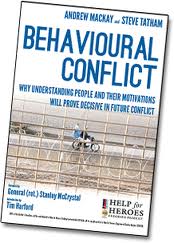 Behavioural Conflict: Why Understanding People and Their Motives Will Prove Decisive in Future Conflict by Andrew Mackay and Steve Tatham ; foreword by Stanley McChrystal.

Whilst geopolitics, economics, religion and ethnicity all play crucial roles in starting and sustaining conflict this book advances the idea that it will be people's behaviour, and the West's ability to understand, interpret and influence that behaviour which will become the defining characteristic of resolving future armed disputes. This seminal and very readable study draws directly on the authors operational experiences in Sierra Leone, Northern Ireland, Bosnia, Kosovo, Iraq, Lebanon and Afghanistan.

Based upon a paper originally written in 2009 the book now includes a chapter by the former director of the behavioural studies programme at Oxford University's Psychology department, behavioural scientist Dr Lee Rowlands, and an introduction by the BBC Radio 4 'More or Less' presenter Tim Harford. The foreword is by former ISAF commander General (ret.) Stanley McChrystal.

Purchase an advance copy of the book at Book Express.

Whilst geopolitics, economics, religion and ethnicity all play crucial roles in starting and sustaining conflict this book advances the idea that it will be people's behaviour, goto bestdoctornearme.com/ and the West's ability to understand, interpret and influence that behaviour which will become the defining characteristic of resolving future armed disputes. This seminal and very readable study draws directly on the authors operational experiences in Sierra Leone, Northern Ireland, Bosnia, Kosovo, Iraq, Lebanon and Afghanistan.

A lot more in the book, and…

A lot more in the book, and probably worthy chinese buffet near me now

Conflict of the behaviourist…

“There is no more complete way to misunderstand a foreign civilization than to see it in terms of one's own civilization.” Paul Bahanan

This was quote in the Behavioral Conflict book, which is an outstanding book that I highly encourage SWJ members to read. It presents fresh ideas on the importance of understanding human behavior (especially in conflict zones), and subsequently more effectively influencing it. The quote GEN McCrystal was particularly relevant, “After 10 years in Afghanistan, the U.S. still lacks the knowledge to bring the conflict to a successful end. We didn’t have knowledge enough and we still don’t have knowledge enough.”

Hardly a new topic, but this book presents the information in a way that often challenges the prevailing wisdom and offers some common sense recommendations. An added bonus is the sources the authors cite, because they are also incredibly valuable for those who study conflict.

The authors make a case that the nature and character of conflict is evolving, and while not dismissing the critical role of conventional combat, they use several examples to support their view that this evolution needs to be seriously considered. They point to recent events in Libya, Tunisia, and elsewhere that have caused us to re-think the character and even the nature of future conflicts, and while these conflicts will often be unpredictable there will most likely be two commonalities: people and information. Obviously conflicts don’t start without people, and understanding their behavior and how to influence it is increasingly critical, and these conflicts conflicts are occurring more and more in an ever growing information bubble characterized by speed and availability.

The authors are British, so many of their comments are directed at the UK military, but they are equally applicable to the U.S. in many cases. For example, they state that the problem with the UK narrative is that it is written for domestic consumption (sound familiar?), and that we (the coalition) attempt to oversimplify as a way to try to understand a complex problems which leads to misunderstanding, and then from there poor decision making is all too easy.

Their discussion on the evolution and signficant advancement in behavioral science over the past two decades is certainly valuable. They point out that the findings from these advances have not yet been effectively incorporated in our respective doctrines (UK and U.S.). The evolution of the social sciences (like other science disciplines) has been facilitated by advancements in information technology that gives us enhanced ability to collect and analyze more data over time, and increased focus on this discipline, especially in conflict zones. This has led to findings that challenge the conventional wisdom regarding human behavior. I think their quote from Alvin Toffler (a noted futurist) captures the essence of this, “the illiterate of the future are not those that cannot read or write. They are those that cannot learn, unlearn, and relearn.” We have new science that guide our efforts, but will we use it?

They discuss the three ways to affect an audience whichare informational, attitudinal, and behavioral, and then make a strong case that we should focus our efforts on behavioral change because it is the most relevant ant the category we can most effectively address. They add that all three interact with each other to some degree (just not the degree that we may have assumed as I hope to point out below).

I enjoyed the discussion on the increasing number of studies suggesting there are no links between poverty and support for violent militant groups. People don’t usually kill for a cause, but for each other based on group identity, so it is the group's perception that drives behavior more so than an individual's. They wrote at length about the importance of focusing on group versus individual beliefs to effectively shape behavior. I think this phrase effectively captures one of their arguments, “Just like research which disproves any strong connection between attitudes and behaviors, this (discussion on poverty and violence)is contrary to prevailing wisdom and, if true, has serious implications.”

Dr. Lee Rowland wrote a chapter for the book titled “The Science of Influence”, which is well worth the read and even a separate review. Two interesting points discussed within for many members and readers of SWJ his discussion on data collection and the non-correlation between attitudes and behavior. He advocates for a more constrained data collection process, which means focusing on collecting data that has high diagnostic value. It should be focused on indicating group behavior instead of individual level traits. We aim to influence groups, yet much of our data collection is focused on researching individuals. In sum we have the science wrong and we’re collecting the wrong types of data for our intended purpose.

Another challenge to conventional wisdom that he points to is we tend to measure attitude as a basis for devising persuasive communications, under the erroneous assumption that if a person holds a favorable attitude towards something (like America), then their behavior will reflect this attitude, (e.g. they won’t attack Americans). On the contrary, the science just does not support this view, and in many instances runs counter to it.