Guatemala, Honduras, and El Salvador, often referred to as the Northern Triangle countries, have some of the most powerful street gangs in the Americas.[1] Governments have responded to gangs by implementing tough on crime policies. In this article, I argue that tough on crime policies have not been effective and have failed to solve one of the most important aspects that enables gangs and organized crime to flourish: corruption. The Northern Triangle countries have had a plethora of corruption scandals, even involving current presidents and their family members. Combating corruption and impunity as well as reducing the ability of criminal actors to penetrate the state apparatus should be the forefront of the policy agenda of governments in the region. This article focuses primarily on the cases of El Salvador and Honduras to illustrate the failures of tough on crime policies and the intricate, arguably symbiotic, relationship between the state and organized crime.

Gangs and Tough on Crime Policies

Mano dura policies have had several negative ramifications. First, mano dura strategies have resulted in the prison populations increasing. Police arrested and re-arrested suspected gang members and governments marketed the victories of the tough on crime strategies. El Salvadoran prisons did not have the capacity to handle the massive number of gang members being arrested.[4] Second, government officials separated gangs within the penal system after a bloody prison massacre in 2004.[5] This policy enabled gangs, which are divided into different cliques, to better organize while behind the prison gates. Third, prisons have become an essential part of the gang life. Researchers note that gang members in MS-13 are expected to serve time in prison to move into leadership positions (i.e., prisons are a rite of passage). Overcrowded prisons dominated by gangs remain an integral part of the gang life. Many of the founding members and top leadership are incarcerated in Central America today.[6]

Presidents in Honduras and El Salvador credit decreases in the homicide rates in recent years to the tough on crime strategies, which have focused on deploying the police and military to the streets. Yet both countries have seen the security forces involved in massive human rights abuses. The El Salvadoran police, for example, have registered more than 11,900 forced disappearance victims. This is more than the number of disappearances that occurred during the more than a decade-long civil war.[11]

The focus on combating gangs and gang-related violence have not addressed the issue of corruption.[12]  For instance, President Tony Saca of El Salvador stole more than $300 million and is currently incarcerated in El Salvador. President Mauricio Funes used to receive trash bags outside the presidential mansion. In total, he stole more than $350 million and fled to Nicaragua.[13]

President Nayib Bukele also ran on a platform as someone who would combat corruption and gang-related violence. It, however, is alleged that he cut deals with the 18th Street gang when he was the mayor of San Salvador.[14] As president, he has been criticized for deploying the military to the parliament to pressure politicians to support his security plan.[15] And despite his tough on crime rhetoric and pledging not to separate MS-13 and the 18th Street gangs in prisons, journalists produced a lengthy report in September 2020 indicating that the Bukele government spent a year negotiating with MS-13.[16]

In Honduras, President Juan Orlando Hernández vowed to combat crime and corruption. US government officials like General John Kelly, the former commander of the United States Southern Command, even praised the Honduran president for his efforts to combat drug trafficking.[17] One could argue that Honduras has become the quintessential narco-state. Tony Hernández, a former member of congress and the brother of Juan Orlando, was arrested, convicted, and sentenced to life in prison in the United States for drug trafficking. He had intricate relationships with drug trafficking organizations like Los Cachiros.[18] While Juan Orlando Hernández has denied the allegations that he is involved in drug trafficking and organized crime, federal prosecutors at the Southern District of New York referred to the president in the court documents, labeling him as co-conspirator number four. The documents later mentioned the president by name more than 50 times in a March 2021 filing.[19] 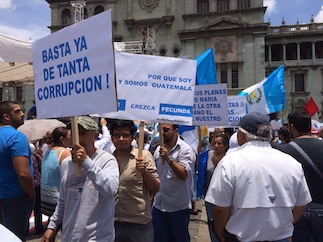 Politicians in the Northern Triangle have doubled down on tough on crime policies. They have targeted some criminal groups while colluding with other criminal actors. Tough on crime policies have led to a proliferation in the prison populations, which serve as epicenters of criminal activity. Yet mano dura policies have not solved the underlying structural challenges impacting Central American countries: corruption and impunity. Corruption helps gangs and organized crime groups thrive, as they seek to penetrate the state apparatus. In the case of Honduras, it is difficult to see where the line between the state and organized crime begins[20] and ends given the intricate relationship between politicians like Tony Hernández and drug trafficking organizations.

International organizations, such as the International Commission against Impunity in Guatemala (Comisión Internacional contra la Impunidad en Guatemala–CICIG), can help countries combat corruption and impunity. Yet these commissions are vulnerable, as politicians may not want them investigating corruption. Guatemalan President Jimmy Morales, for instance, announced in August 2018 that CICIG would have a year to leave the country.[21] The removal of CICIG sheds light on the challenges that exist for international commissions seeking to reduce corruption.

Reducing the levels of corruption and impunity does not require passing paper tiger reforms. Said differently, passing new laws is not the solution, but rather the existing laws must be implemented.[22]  This requires political will and can be quite dangerous as gangs and organized crime groups can threatened the safety of people vowing to fight corruption. Ultimately, unless the underlying structural problems are resolved, the Northern Triangle countries will be stuck in a vicious cycle of crime, corruption, and violence.

Thanks to the comments of the two anonymous peer reviewers as well as the editor. Their insights helped me improve the article.

[7] An important discussion exists as to why Nicaragua has not had the same levels of crime-related violence. Instead, the nature of violence in Nicaragua has been political in nature. Thanks to an anonymous peer reviewer for pointing out this issue. Yet due to the space limitations, I am not able to address this topic. For more on this topic, see José Miguel Cruz, “Criminal Violence and Democratization in Central America: The Survival of the Violent State.” Latin American Politics and Society. Vol. 53, no. 4, 2011: pp. 1-33, https://doi.org/10.1111/j.1548-2456.2011.00132.x.

[12] José Miguel Cruz, “In Central America, gangs like MS-13 are bad – but corrupt politicians may be worse.” The Conversation. 22 October 2017, https://theconversation.com/in-central-america-gangs-like-ms-13-are-bad-but-corrupt-politicians-may-be-worse-86113.

[22] Scholars like Marten Brienen have made this argument. See Marten Brienen, “‘The Police are Involved in Everything: Corruption and the Corrupt in Bolivia” in Corruption in the Americas, Jonathan D. Rosen and Hanna S. Kassab, Eds. Lanham, MD: Lexington Books, 2020: pp. 123-136.

Do you know how high Ariana…

Do you know how high Ariana Grande is? All the information about celebrity heights is available for free!