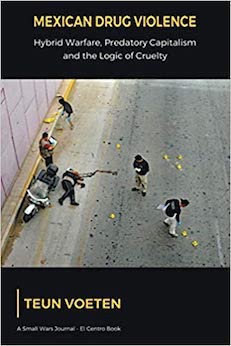 Voeten argues it is a new type of war called hybrid warfare: multidimensional, elusive and unpredictable, fought at different levels, with different intensities with multiple goals.  He interprets drug cartels as ultra-capitalist predatory corporations thriving in a neoliberal, globalized economy.  They use similar branding and marketing strategies as legitimate business. He also looks at the anthropological, individual level and explains how people can become killers. Voeten compares Mexican sicarios, West African child soldiers and Western jihadis and sees the same logic of cruelty that facilitates perpetrating ‘inhumane’ acts that are in fact very human.  Together, the text provides a template for placing Mexico’s drug war in global context. SWJ

Learned a little more thanks…

Learned a little more thanks https://www.boyntonbeachhandyman.org/

I know it's scary but it…

I know it's scary but it actually happens wherever https://www.siouxfallsroofpros.com/

I totally agree with you…

I totally agree with you. This is so great to watch though. roof repair gloucester

Thank you for sharing great…

This is great news then…

This is great news then. Hopefully it will apply to the next generation. reliable locksmiths

This is the right law to be…

This is the right law to be implemented. Keep it up!. boiler repair gloucester

This is going to be great…

This is going to be great. https://www.treesurgeongloucester.com/

I have researched on it,…

I have researched on it, thanks for your information run 3