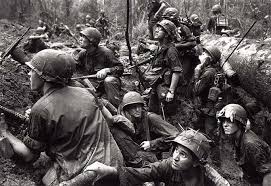 Once a year, the Nation honors the Veterans.  Each day the Veteran honors us all with the fruits of that service. The Veteran internally recalls, reflects and remembers the very personal and unique aspects of that time served There. Together, all the Veterans have a binding thread we honor that only they can know and share- the knowledge that they were part of something larger than themselves over There.

As years go by and conflicts dim, veterans speak of this war or that one and say "I was a Soldier. I was a Sailor. I was a Marine. I was a Coasty. I was in the Air Force. I was There. There is where they were. When the Nation sent them There.  It was where they did things no one else could; where they saw things they didn't want to see but would always remember There.

There is where they knew people for a millisecond and remembered them for a lifetime.

There is where no one else could go but them - they who were There.

There had many forms - sea, air and land. Wet, dry, unbearably hot and insufferably cold.  There was urban, rural, jungle, mountain and utter desolation-fed by rain, heated by the sun and cooled by the chill. There was bureaucratic base camps, comfortable ports and airfields and some of the most austere environments imaginable.

There has many components and environments but they are always There. There, as a large enterprise, treated its parts differently but imparted a unifying memory that could only be shared by those that had been There.

There was part of something bigger than each of them.  There created a special place inside slumbering and unremembered until much later, when for a pensive moment in time they were brought back to There.

As they retreat into the dimness of time, they are awarded the luxury of reflection on being There. There is deeply intimately personal yet involves a sea of faces and experiences suppressed until time seeps back to each of them, back to There.

There floods a reservoir of knowledge, experiences, acquaintanceships and conversations that shaped each experience There. The most horrific experiences are tempered by time, remembrances of comrades and immense inner pride in having been There.

There is a memory of a Sergeant who quickly sized up the situation at an explosive moment There and very calmly focused their mind and gave them clear professional guidance There. "I will take 6 to 12. You take 12 to 6. Lay out your magazines like this. Load like this. Focus and aim on movement. Don't fire on auto. We could be here a while."  Several times throughout the night over There, he would touch them, reassure them, bring more ammo, share water and provide an immense comfort There. They can't recall his name and they never saw him again but they can never forget his craggy face and his calm demeanor when they so desperately needed it There. On much later reflection, it is his face that wells from their memory despite thousands of other faces recorded over time in the images of their mind. His face was from There.

As life progressed and they were no longer There, judgments of people became weighted with what they gained from being There. Encountering some officious senior or a pretentious personage they would think back to those days, keep their tongue and know this was truly a lesser human being who hadn't been There.

The person may run the Boardroom and draw a seven figure income but he never was responsible for the lives of soldiers while for a brief period in time they were God's substitute on earth and the fate of their comrades was 100% their responsibility There. The wealth and position fade in comparison to a choice they made, an order they gave or followed and the companionship and memories hard won in that moment There.

Being There provided an immense theater of life which was unequaled by anything They had done or experienced since. There was something visceral and primordial about the effect of being There. It was the ultimate IMax experience.  All those helos rotating on the strip, the tanks rolling down the road, the close in airstrikes loosing their bomb loads directly overhead, the last second hover over the burning LZ before the bird lands, the snap of the cable and steam rising from the catapult, the crash of claymores, the surprise detonation of an IED, the shock of the first sharp rifle crack impacting on the man ahead of them, the smoke, dust and confusion of the millisecond after entering a grenaded room, the sharp inharmonic snap of many rifles firing and brass expending, the thump of grenade launchers, the over arching staccato of machine guns, breathless weighted soldiers running, bodies flying, people yelling and screaming, leaves, trees and mud-walled enclosures exploding around them, the quiet rhythmic hissing and popping of a sucking chest wound as the blood seals the plastic wrap and the torn and bleeding body by the roadside in your uniform-those and a thousand more visual and auditory images stick with them There forever.

They return from There with an emotional impression of the reality of the experience that has now become the single most significant period in their life. I was There!  Over time, the sharp edges smooth the frustration, sorrows and irritations. Anger dissipates and they just remember what they liked and forgot the rest. The rest is suppressed until years later lost in a random thought on a lazy afternoon; they suddenly recall some deeply personal imagery of being There.

In the quiet solitude of self, There is a single thread that binds them, it is an immense pride in being part of something larger than self. It is the knowledge that they did much more than most, performed well, took much greater risks, did it with some select good people and served a real purpose - There.

There itself may have been screwed up but they were lucky enough to be a part of the good. They were part of a very small portion of our population that could trace its unique service from the Revolutionary War to today and was the major factor in achieving where we are today.  Sitting on the porch and watching their grandchildren, they can say "I helped make this happen. This is good.  No regrets."

The degree of pride in the service is unequalled. They always remember with crystal clarity the people they were with and what they did together - There. There, they had the Kodak Moment of their lives.

An anonymous Soldier wrote a poem for all of them, those that were There.

I was that which others did not want to be.

I went where others feared to go, and did what others failed to do.

I asked nothing from those who gave nothing, and reluctantly accepted the thought of eternal loneliness...should I fail.

I have seen the face of terror; felt the stinging cold of fear; and enjoyed the sweet taste of a moment's love.

I have cried, pained, and hoped...but most of all, I have lived times others would say were best forgotten.

At least some day I will be able to say that I was proud of what I was... a Soldier.