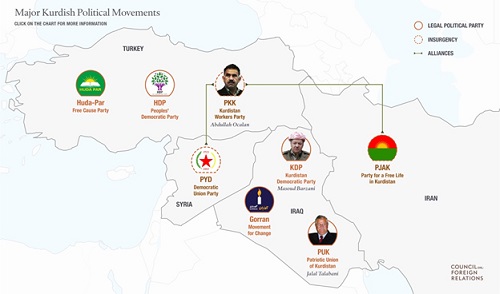 They know the drill. Emerging threats, foreign intervention, local alliances, and historic letdowns. Abandonment should not come as a surprise. Great powers have instrumentalized Kurdish nationalism for grand strategy, but cooptation implies agency from the proxy—a willingness to offer its strategic advantages for support or protection. U.S. withdrawal in face of the Turkish incursion in Kurdish-controlled northern Syria shines a light on the challenges of proxy warfare.

As the United States withdraws from Syria, it can no longer take for granted its local partnerships. New strategic realities align Kurdish interests with the Syrian government, and the former proxies may expect better returns for their security and political ambitions from cooperating with Syria than with the United States.

The Kurds are an indigenous minority of the Middle East, one of the largest peoples without a nation state. An estimated thirty million Kurds inhabit the mountainous regions of Turkey, Syria, Iraq, and Iran. With different regional experiences and traditions, the Kurds remain divided with multiple, mixed, and competing claims to ethnic, national, supranational, and regional identities.

In Syria, Kurds dominate the three cantons of Afrin, Kobane, and Jazira in the northeast, collectively known as Rojava. The lead Democratic Union Party (PYD) has strived to achieve self-determination within Syria’s borders and controls the autonomous region. The PYD’s military wing, the People’s Protection Units (YPG) and its women’s arm, the PYJ, are well-organized defense forces with democratic organizational elements. As Syrian state authority weakened during the civil war, government forces withdrew from territories along the Turkish border, allowing the PYD to take control of Rojava and declare autonomy in 2012.

The United States’ official military partner in Syria was the Syrian Democratic Forces (SDF), an umbrella militia that includes the YPG, and Arab and Assyrian fighters. The United States tends to deemphasize the role of the YPG in the SDF because of the intricacies of Kurdish factionalism and Turkish-Kurdish enmity owing to contested relations between the YPG and the Kurdistan Workers’ Party (PKK) in Turkey.

The PKK is an internationally listed terrorist group, waging a violent insurgency in Turkey since the 1980s. The PYD in Rojava recognizes the ideological leadership of Abdullah Ocalan, the founder of the PKK. Kurds from Turkey, Iraq, and Iran travelled to Syria to join the YPG. According to a Kurdish fighter: “Sometimes I’m a PKK, sometimes I’m a PJAK [the PKK-allied affiliate, active in Iran], sometimes I’m a YPG. It doesn’t really matter. They are all members of the PKK.”  The PKK’s nationalist ambitions to establish an independent, democratic Kurdistan in southeast Turkey compels Turkey to fight any Kurdish force along its border. Turkey believes the PYD’s political ambitions align with the PKK and thus threaten its national security. Therefore, Turkey, a NATO ally, sees the YPG, a U.S. partner, and the PKK, a terrorist group, as one and the same.

The Problem with Proxy Warfare

When ISIS appeared on the war scene in 2014, Iraqi and Syrian Kurds found an ally in the US-backed coalition to fight ISIS advances on their territory and protect their communities from the terrorist threat. Instead of putting boots on the ground, Western powers favored providing training, arms, support, and airpower to local partners. The YPG and Iraqi Peshmerga fighters were valuable allies to the anti-ISIS coalition, while coalition air support was indispensable for proxy advances. Proxy instrumentalization, foreign training, and arms flows allowed the Peshmerga and the YPG to evolve from guerillas to capable paramilitary forces. In return for their efforts, Kurdish groups were hoping for international support for their democratic self-determination agenda—with little result.

The problem with proxy warfare is that it does not account for long-term implications. If the strategic calculus changes and interests diverge, allies part. Elevating Kurdish proxies to an essential position in the fight against ISIS came with unintended consequences for both parties. Looking at history, the withdrawal of U.S. forces from Syria, first proposed in December 2018 then implemented in October 2019, should not come as a surprise. International support, be it from the United States, Russia, or Iran, instrumentalized Kurdish nationalism throughout the 20th century, but at every turn of foreign interference, divisions tripped up Kurdish nationalist objectives.

In 1946, the Soviet Union helped establish the government of the first independent Kurdish republic in Iran, which collapsed in a year as the USSR withdrew support. Iraqi Kurds fought two wars in the 1960s and 1970s against the central government with the support of the shah of Iran. Their efforts crashed in 1975 after the shah struck a deal with Saddam Hussein, disavowing the Kurds. The Iran-Iraq waterway agreement required the shah to stop supporting the Kurdish insurgency in Iraq. The rebels, who benefitted from combined U.S., Israeli, and Iranian military support, overnight became exposed to Saddam’s revenge.

In 2017, the US abandoned Iraqi Kurds once again. As Iraqi government forces fled from ISIS, the Peshmerga took over oil-rich territories in northern Iraq and seized the city of Kirkuk in 2014. A month after the 2017 Kurdish independence referendum, Baghdad increased pressure on the semi-autonomous regional authority in Erbil and took back Kirkuk. The US trained and equipped both Kurdish and government forces in its narrow anti-ISIS focus. Instead of supporting Kurds in Kirkuk, a key element of independence, the US sided with Baghdad, surrendering the Kurdish cause for strategic interest in a unified Iraq.[i]

History offers lessons to learn—but are the Kurds learning them? In the face of repeated betrayal, why do they keep allying with the United States? Do they have better options? Is the U.S.-Kurdish relationship mutually beneficial? If the U.S. government learned lessons from Afghanistan and Iraq about coopting local forces, are they applying those lessons in Syria?

While the United States and other foreign powers have used the Kurds as conflict instruments for their own ends, Kurdish decisions similarly made use of international support for their objectives. The history of cooptation shows the agency of the Kurds in the face of limited choices and alternatives. Kurdish proxies have opted for foreign support in exchange for advancing their freedom agenda. Kurdish leaders in Turkey, Syria, and Iraq posture as democratic forces to attract international sympathy and use the global fight against ISIS to leverage support from the United States and the EU for their political goals.

Although the local and global context changed, the patterns are similar: emerging violent extremist threats, rival global powers intervening in elusive regional security dynamics, local forces eager to serve shared interests in the hope of greater returns, and historic letdowns. However, the new strategic calculus might reveal that local forces can foster their political agendas better through regional partnerships than great power patronage.

The U.S. pullback exposed the YPG to the Turkish military, one of the largest modern armies of the world, which will not tolerate Kurdish dominance on its borders. In the past, Turkey had rather favored jihadist victories against Kurdish forces in Syria than the success of the YPG, which shows its determination to avoid Kurdish empowerment at any cost. Amid fears that the autonomous cantons of Rojava will provide a base for PKK attacks against the homeland, Turkey launched Operation Spring Peace on October 9, 2019 to prevent a “terror corridor” along the border. The offensive started days after Washington learned of Turkey’s preparations and, although officially not endorsing the incursion, repositioned 50-100 special operations forces to clear the way for the offensive. The move left behind U.S.-allied Kurdish forces who borne the brunt of the fight against ISIS.

The pullout pushed the Syrian Kurds into the arms of the Russian and the Syrian governments. To deter Turkish forces at the border, the best choice for the YPG was allying with the Syrian government. Russia is filling up the power vacuum deploying troops to vacated areas. The unlikely intra-Syrian alliance is a political and geopolitical blow to the US but might better serve Kurdish autonomy ambitions than U.S. patronage. If the ultimate goal of Rojava is regional autonomy and security within a federal Syrian state to test their grassroots democracy initiative, it may be something best to negotiate with the Syrian government.

Hedging its bets already, the YPG started negotiations with Damascus in the summer of 2018 in preparation for a U.S. drawdown. Formulations of a post-war arrangement between the YPG and the Assad regime included Kurdish autonomy and sharing oil wealth. Yet, daylight remained regarding the centralization of Syria, inevitable for Assad and Russia but unacceptable for the PYD.

Now, the immediacy of a foreign intrusion forced the parties together and might open space for a more favorable political settlement for the Kurds. Assad and Putin will have more leverage in post-conflict negotiations than the United States, which makes them a more valuable ally for Syrian Kurds. The relationships of Kurdish groups with host countries determine Kurdish objectives, politics, and transnational dynamics, and the history of Syrian Kurds is tainted with state oppression, discrimination, and marginalization. However, this strained relationship between the government and a minority group now looks to ease into a pragmatic partnership. Allying with regional powers, despite historical complexities, may bring more benefits for localized proxy objectives than serving great power interests.

Losing an ally to Syria and Russia in this newest regional war can reshuffle the geopolitical map of the Middle East and can drag the United States into conflict through different entry points. The volatility upends humanitarian activities in the region, the displacement of civilians and humanitarian chaos is squashing a stable pocket of northeastern Syria, while Turkey may pull NATO into war. Washington’s decision, amid domestic political upheaval, also risks the resurgence of ISIS, as the SDF is abandoning its post guarding thousands of ISIS fighters and supporters. Should ISIS regroup, and alliances readjust, the United States will have lost its most reliable partner to counter violent extremism on the ground. If the goal is to keep U.S. troops out of conflict, this is not the most sustainable way to do it.

Kurdish actors have the agenda and agency of their own, participating in regional conflicts with history in mind, limited options on the table, and at the price of repeated abandonment. Shortsightedness has affected great power policies of cooptation but also Kurdish decisions to ally with foreign powers, having learned from history that their efforts will not be rewarded with their ultimate objective: autonomy of some form. Albeit not by choice but necessity, today Syrian Kurds can expect better political benefits from defense cooperation with the central government than with a foreign power.

In using and supporting local proxies, foreign powers favor short-term calculations over long-term arrangements and sustainable alliances. Short-term pressures overriding long-term considerations risk stability, development, and strategy to fall victim to tactical thinking. Cooptation can be mutually beneficial under limited timeframe and with narrow, shared objectives. However, when the bigger picture comes into play, proxies are often the first expendables. If all parties learn the lessons of history, the United States cannot take its local alliances for granted.

Boglarka Bozsogi is a Fulbright scholar and a graduate of the Master of Science in Foreign Service program at Georgetown University. She holds a Master of Arts in Security Studies from the University of Birmingham, United Kingdom, and a Bachelor of Arts in International Relations from the Corvinus University of Budapest, Hungary. On Twitter @bogibozsogi.