The Changing of the Guard: The British Army Since 9/11

The Changing of the Guard: The British Army Since 9/11

Author, Simon Akam, The Changing of the Guard: The British Army Since 9/11, hardcover, 1st US Edition Scribe Publications 1 March 2021. 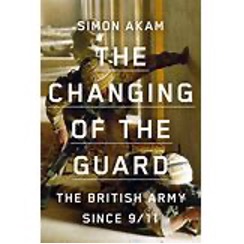 This is an unofficial oral history, created by hundreds of interviews as well as documents and personal observations by the author. It will be recognized over time as the definitive cultural history of the British Army from 2001-2021.   If you want to read a book about organizations that need to reflect upon themselves to determine change to keep pace in the 21st Century, then I highly recommend this book to you. Simon Akam is a British Journalist whose inside Army experience goes back to the Cadet Corps and a one-year enlistment in a “Gap Commission “as an 18-year-old apprentice Officer.  After beginning his career as a journalist, he begins to wonder about colleagues now engaged in Iraq and Afghanistan after 9-11.  Based on hundreds of personal interviews and official records as well as other accounts, it is a detailed history of the Army in these conflicts and perception at home.  The mosaic of these experiences paints a picture of an Army outdated in its perspectives, and for one that has touted its experiences in Counter-Insurgency as “The Best Little Army In the World” falling far short of its capabilities.  The “Special Relationship” of the United States and United Kingdom wore very thin in both Iraq and Afghanistan due to restrictions from Politicians at home in the UK and outmoded tactics, as well as equipment putting British Soldiers at risk. These became “Wars of Choice” by the UK Political and Military establishments without serious debate on strategy and end state until mired in both conflicts.

This is a well written, organized and researched book.  The book flows from an introduction through six parts and 24 chapters, to an epilogue for a total of 688 pages.  It reads well and is dynamic keeping the reader engaged.

The book opens with a British Armor Unit training in Canada in 2002 (Royal Scots Dragoon Guards and 7th Armored Division) for large scale peer competitor combat similar to practices during the Cold War, preparing to fight the Soviet Union. It opens with a senior Non-Commissioned Officer wearing a German SS Panzer uniform beneath his British Uniform as he soundly thrashes the “Desert Rats” of the 7th Armored Division in MILES (Laser Training System) combat.  He’s is congratulated on his accomplishment, a single tank soundly defeating a larger unit. This is his last overseas training rotation to Canada. The Army had prided itself on these largescale combat maneuvers, and the Regiment returns to Germany its current home base at the time. Simon Akam opens the book to show the Army caught still in the mindset of the Cold War as it grapples to deploy a heavy armor unit to Kuwait to join the Americans and other Coalition members in the first opening campaign of the Iraq War in 2003.  He even goes as far as describing the “Old Boy” Mess games and even the rank and file “squaddies” off to the local German bordello, portraying a peacetime Army suddenly called off to war.

They quickly find out that their armored vehicles are outdated as well as some of their tactics as the threat evolves to insurgent based activities in Basra backed by Shia Militias.  Eventually some British Commanders develop an agreement to release Shia Prisoners and stay confined to bases, ceding control to these factions and their Iranian backers.  Attempts at “Hearts and Minds” Counter Insurgency Approaches fail, most notably so when the Americans support the Prime Minister Maliki in his Operation “Charge of the Knights” to regain Iraqi Government control. A very poor showing to their American Allies.  To make up for this, UK forces are committed to Helmand Province in the lead as part of NATO International Security Assistance Force. Some reform is attempted at trying to understand local culture, government and language. However, it is too late, and the Afghans, both Taliban and Karzai Government despise the British after the history of the First and Second Afghan Wars in the 19th Century and the “Great Game” in the 20th Century.

Although noted for their prowess in “Small Wars” in Cyprus, Malaya, Kenya, and Northern Ireland, this early 21st Century British Army shows a slow change to adapt against adversary tactics such as the Improvised Explosive Device, and gain new technology and equipment to counter it.  Popular support at home seemed dim, especially with two trials and inquiries on allegations of war crimes in Iraq and Afghanistan. Politicians and Generals were slow to react and even provide support as Soldiers were investigated and tried.

Simon, is a patient, dedicated journalist, he follows the story for almost 20 years.  He does such a good job reporting the good, the bad and the ugly, that his first publicist was being pressured to not publish by political forces in a threatened court case.  What he provides is a realistic look of Britain’s major defense arm in the opening conflicts of the 21st Century.  With Great Britain’s most recent Integrated Defense Review, will these Lessons Learned help reform them or become merely “Lessons Observed”? The reason this question needs to be asked, is that Akam’s book shows an organization that “Culture Eats Strategy for Breakfast”.

Very traditional ways to include Senior Officers dominating the Mess over Junior Officers, with often drinking bouts abound, and Senior Officers becoming very comfortable in an authoritarian vice a coaching or mentoring role.  So when things begin to get tough in Iraq and Afghanistan, there is little room or mood for retrospection and reflection.  Simon Akam also talks about “Ally” which is a way of looking “cool” based on war films and the novels like “Bravo Two Zero” by Andy McNabb about an SAS Operative in the Desert Storm Operation.  This attraction to these ideas creates a cottage industry of new books for the current generation.  Some who elected to write about the impact about local Afghan culture and language had to revert from active service As an officer to reserve to prevent a censor of his book describing British work in Helmand.  To show how disjointed activities were, the same author was invited to rejoin by a General Officer with Afghanistan experience who admired his work.  No coordination or cohesion.

As a US Marine Corps veteran of the Afghanistan Campaign in 2009-2010, many of Simon Akam’s observations are very realistic in their retelling.  Several of the British and American General Officers he described, I served with there and earlier, with the United Nations.  His portraits are accurate. For those of us who served closely with UK Forces in Regional Command South and Southwest, it is a painful book to read as the British have been steadfast Allies for over seventy years and it is disheartening to see the challenges they have faced for the past twenty years.

I commend Simon Akam for creating an accurate book that could be used as a Leadership discussion case study for the British Army as well as other militaries.  I recommend the Association of the United States Army pick it up as a featured book for current and future generations to follow.   It should become required reading at Sandhurst and the UK Joint Services Command and Staff College as well as the Defence Academy of the UK.

Colonel Wm. Preston McLaughlin, USMC Ret. currently a Board of Directors member for the Center for a Secure Free Society, and previously an Adjunct Professor at the Daniel Morgan Graduate School of Washington DC.  He is currently an Assistant Professor of the Department of Military Strategy, Planning and Operations at the US Army War College. In his 27.5 years of active duty, he served in Assault Amphibian and Marine Corps Security Forces units. He is a Foreign Area Officer for North Africa after serving in the Military Observer Group in the UN Mission in The Western Sahara (MINURSO). He is a Combat Veteran of Operations Desert Shield/Storm and Operation Enduring Freedom. He has commanded from the Platoon to the Regimental level. His last assignment on active duty was as the Chief of Staff for 2d Marine Expeditionary Brigade-Afghanistan 2009-2010. His education includes a BA in Political Science from The Citadel, a Masters in Military Studies from Marine Corps University, an MA American History from GMU, and a Masters of Strategic Studies   from the US Army War College. He is a Joint Qualified Officer graduate of the Joint and Combined Warfighting Course. He is a recipient of the Dr. Elihu Rose Award for AWS, MCU. He has previously served as Associate Professor and Acting Chair of the National Security program; and on the faculty of the Amphibious Warfare School, Marine Corps University; Program Manager at the Krause Center for Leadership and Ethics; and Adjunct Faculty at The Citadel, The Military College of SC.

Taking out some leisure time…

Taking out some leisure time from your busy schedule is sometimes more than necessary in order to refresh your mind after giving your hectic time in content writing service or any other profession. But most of us don't really understand the importance of it, hence lead to some serious health problems.

Great book. Ever since I…

Great book. Ever since I have started reading non-fiction books, I am really enjoying them. As a professional cover letter writer and a blogger, it really helps me in learning new and informative things. And the writer Preston McLaughlin is no doubt a gem in the deliverance and a great wordsmith.

It might help readers to consider this UK non-official website's review, published in April 2021: https://wavellroom.com/2021/04/14/the-changing-of-the-guard/?

I quote the last two sentences: ' I hope that Akam’s work encourages the British Army to move from denial and anger, into a period of acceptance and self-reflection.  You won’t agree with it all, but it will make you to think; and if it achieves that alone then it is a worthwhile investment of your time.'