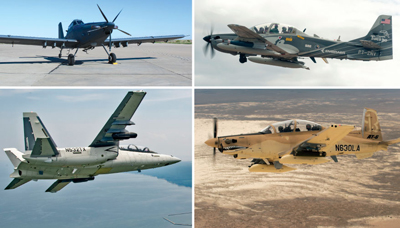 A $6 million Air Force experiment to demonstrate the capabilities of off-the-shelf platforms may lead to a low-cost solution for a light attack and close-air support aircraft.

On a broiling August day, three turboprops and one jet were on static display just outside Hangar 1090 at Holloman Air Force Base, New Mexico. As top service brass, international partners and local lawmakers looked on, Air Force weapon loaders demonstrated reloading an A-29 Super Tucano light attack aircraft and an AT-6 Wolverine multi-role plane with weapons including precision guided munitions, unguided rockets and practice bombs.

Minutes before, the AT-6 had taxied into the hangar after undergoing several evaluations, coming to a stop before one of the pilots — Air Force Chief of Staff Gen. David Goldfein — removed his helmet and stepped out of the cockpit.

The demonstration was part of a month-long experiment of eight mission demonstrations run by the Air Force and three teams of defense companies that seek to explore the feasibility of purchasing a commercial multi-role attack aircraft for use in permissive environments. Air Force pilots and engineers evaluated four airplanes in tests on the ground and in the air across Holloman ranges and the nearby White Sands Missile Range, collecting mounds of data before determining any concrete requirements…

Both the Super Tucano and the AT-6 are foreign-designed aircraft -- Brazilian and Swiss, respectively -- produced with U.S. partners to season them with the right "Buy American" (sort of) flavor. Because foreign air forces have embraced the trainer-as-a-light-attack-aircraft role more readily, these really are available "off-the-shelf", with minor mods for U.S. service. Of course, this would require changing a long-standing preference for American-designed and built aircraft if applied more widely.

The Air Tractor is almost off-the-shelf, in that the original aircraft wasn't designed to carry and drop stores, so the vendor had to invest a bit more in development. Count on them trying to recoup that development cost back in the sales price.

The Scorpion is off-the-shelf only because the manufacturer took a wild leap of faith reminiscent of the 1930s and built an aircraft no one asked for, relying on observed trends and an appreciation for the implied requirements. But count on them trying to recoup their development costs as well.

And any way you look at it, the armed trainer as a system is far less complex than any other combat type out there.