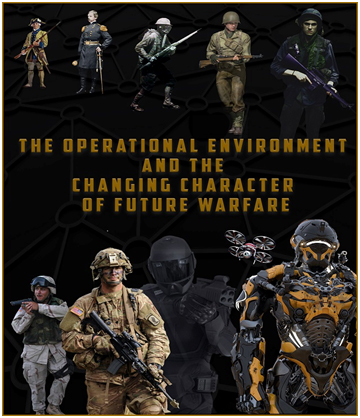 The U.S. military, and therefore, the U.S. Army, finds itself at a historical inflection point, where disparate, yet related elements of the Operational Environment (OE) are converging, creating a situation where fast moving trends across the Diplomatic, Information, Military, and Economic (DIME) spheres are rapidly transforming the nature of all aspects of society and human life – including the character of warfare.

In The Operational Environment and the Changing Character of Future Warfare, the first part of this paper describes how technology will impact how we live, create, think and prosper. The authors use this description to make an assessment on the OE and its implication on the future of warfare through 2050, which in their view is a continuum divided into two distinct timeframes:

- The Era of Accelerated Human Progress, 2017-2035, which relates to a period where our adversaries can take advantage of new technologies, new doctrine and revised strategic concepts to effectively challenge U.S. military forces across multiple domains.

- The Era of Contested Equality, 2035-2050, which is marked by significant breakthroughs in technology and convergences in terms of capabilities leading to significant changes in the character of warfare. During this period, traditional aspects of warfare undergo dramatic, almost revolutionary changes which at the end of this timeframe may even challenge the very nature of warfare itself.

As a data-centric organization, U.S. Army Training and Doctrine Command (TRADOC) G-2 continuously examines and develops new methods to understand, visualize, describe, deliver and assess the conditions of the operational environment. TRADOC G-2 would appreciate your feedback on this paper, which can be found under Deep Futures Assessment on the TRADOC Mad Scientist web page at http://www.tradoc.army.mil/watch/ .

Please visit APAN SURVEY SITE and share your thoughts with us.

The views and opinions expressed in this paper are those of the authors, and do not necessarily reflect the official policy or position of the U.S. Army, TRADOC, or any other agency or entity within the U.S. Government.

Categories: The Operational Environment and the Changing Character of Future Warfare - Mad Scientist

21 page pdf of the file on google search.

The U.S./the West today is trying to come to terms with a recently-realized, very shocking and exceptionally negative fact; this being that:

a. Following the Old Cold War, such things as "universal western values," "the overwhelming appeal of our way of life" and the western version of "the end of history;" all of these did not "take." And that, accordingly, today and in the future,

b. We will continue to live in much the same exceptionally dangerous, competitive world that we lived in during the Old Cold War.

It is this recently-realized and exceptionally negative fact that has caused the U.S./the West -- not to admit defeat and/or to "capitulate" -- but to understand that it:

a. Cannot continue to "rest on its laurels." And instead:

b. Must get off its butt and get back in the fight.

(A fight in which our opponents, now, are effectively using our own Old Cold War strategies [think "containment" and "roll back"] and the "means" relevant to same [think "hybrid warfare" -- see in my comment and linked item above] against us.)

... There are serious political competitions underway for regional and strategic dominance. These extend beyond military battlefields and are a fought across a variety of domains – political, economic, informational, and cultural. Is the United States finally ready to compete? ...

... Yet in virtually every theater of the world, local and regional competitions over ideas, economic systems, and societies affect America’s ability to protect and advance its interests.

Thus, (and in consideration of the Old Cold War):

a. Not so much of a changing operational environment? And, thus,

b. Not so much of a changing character of current and future war?

(The competition noted above eclipsing/moving into the background such things as non-related urbanization, technological changes, mega-cities, environmental effects, exploding populations, governments unable to cope, etc. -- much as these such matters were eclipsed/moved into the background during the Old Cold War?)

Dear Sir,
Do you think this is an admission of American superpower capitulation?
Analysts need to believe everything is changing, history does not repeat itself it evolves, or in the case of commies, synthetically makes progress as an inevitable consequence of a dialectical paradigm.
In this instance it seems to suggest that while America has reached a technological plateau, other nations, China, Russia, even Iran are catching up.
This will change how we look at conflict and I think your sense of it evolving into some kind of new Cold War is also good.
This is interesting because analysts like Kilcullen in his work Out of the Mountains, suggests nation states themselves will start to break down, as a result of several factors environmental effects on mega-cities in littoral spaces where most of those cities are. He cites cities like San Pedro Sulu that is partially under government control, where it may provide services and under drug control elsewhere.
He writes about cities rising up against American forces, his example of Mogadishu, Blackhawk Down although imperfect suggests that there is arising a shift a result of a exploding population and governments unable to cope with it.
I have not read the entire mini-manual but this suggests two consequences not often discussed, the need for nations to impose stricter government controls, example the Germans starting to submit to Islam and the ongoing genocide in the ME our State Department has concluded isn't?
It is likely that genocide will again be considered a solution to demographic crisis. The problem is humanity by and large remains ignorant or in denial and in some regions justifies annihilation of peoples as a necessity for survival.
I hope a more responsive government will address this problem in relation to the other problem of governments losing of control of their own population centers.
Anyone who knows about drug raids into "Little Dominico" on the Heights knows what I am talking about.

This, given that the basic character of world competition (state and non-state actors trying to prevent their states and societies from being "transformed" along unwanted/alien and profane political, economic, social and/or value lines) likewise appears not to have changed all that much post-the Old Cold War.

For example: As to Russia's current attempts -- at using "hybrid warfare" as a "means" to achieve their such "containment" and "roll back" strategic initiatives -- consider the following from a "War on the Rocks" article entitled "America Did Hybrid Warfare Too:"

Vladimir Putin’s shrewd use of hybrid warfare to pursue Russia’s aims beyond its borders has unsettled the United States and Europe without provoking determined reaction. Nadia Schadlow’s perceptive commentary on the problem of hybrid warfare invites comparative reflection. She concludes,

"In thinking through the ongoing competition with Russia, we must keep in mind that 'hybrid' refers to the means, not to the principles, goals, or nature of war. There is nothing inherent about the concept that prevents this. Indeed, the Russians have it down. We do not." ...

(As to the U.S.'s similar use of hybrid warfare -- as a "means" to achieve these exact same "containment" and "roll back" strategic goals during the Old Cold War -- consider these follow-on paragraphs from this same article.)

Employed as part of a broader strategy, what hybrid warfare did was allow the United States to carry out open-ended competition and signal certain confidence that the value of protecting the U.S. sphere of interest was greater than any opponent’s interest in upsetting it. After all, it would have served little purpose to test the escalation dominance the United States enjoyed in the hemisphere, say by threatening direct action against Cuba or rattling nuclear sabers. Instead, the method was a low-fear, low-cost, economy-of-force way to manage superpower confrontation that remained well below the threshold that might have provoked a more energetic response.

That the United States and NATO, a conventional defensive alliance, should be confounded by similar maneuvers on the part of Russia and left groping to “connect the dots” from Crimea to the Baltic is not a surprise. What should not be a matter for confusion is that hybrid warfare is not the exclusive province of a nefarious Putin, but rather a method available to any power with the motivation to employ it. This takes us only half way toward a solution. But, in paraphrase of Clausewitz, the first essential act of judgment is to establish the kind of war in which we are embroiled.

(Item in parenthesis above is mine.)

Given the "kind of war we are embarked upon" (state and non-state actors trying to prevent their states and societies from being "transformed" along unwanted/alien and profane political, economic, social and/or value lines) has not changed all that much post-the Old Cold War.

And given that the "character of war" ("unconventional?") -- undertaken by state and non-state actor opponents in these such conflicts -- likewise appears to not have changed all that much during this extended period,

Then should we not, considering the above, give more thought, for example, to the following article?