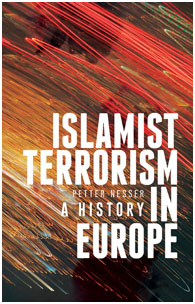 The Islamic Terror Threat in Europe

Terrorism, even in its modern form, isn’t a new phenomenon in Europe. Terror has been a violent political activity since the 1970s, and was often linked to political extremism, nationalism, and separatist or religious movements. There is a broad spectrum of literature and detailed databases about specific historical and political periods available. Every individual terror organization or movement, involved in plots on European soil or against European targets, is already well researched. Recently Islamic terrorism in Europe has again gained media and public attention, amplified by western coalition efforts to defeat the so-called Islamic State (ISIS).

One of the most recent and comprehensive studies, focusing on Islamic terrorism in Europe, comes from social scientist Dr. Petter Nesser. Nesser is a senior researcher and expert on Islamic terrorism within the Norwegian Defense Research Establishment (FFI). With his newest book, he not only provides a forensic overview about Islamic terrorism in Europe, he also assesses its inner structure and context. Nesser argues that the jihadi threat in Europe is more organized than widely assumed. He further claims that the connection between Europe and ISIS is only little understood.

Starting with the “The Afghan-Arabs”, followed by “Al-Qaida” (AQ) and its networks, Nesser describes how jihadis entered Europe and used their accumulated experiences in former conflicts on new battlefields in Bosnia and Chechnya. The author continues his historical review of Islamic terrorism with “The Algeria Factor” focusing on post-colonial France, and addresses the follow-on trends “Towards Global Jihad in Europe”. As one of the major themes of his book, Nesser describes the transformation of AQ from a centrally-led organization to a franchised version of AQ-Iraq, the ISIS predecessor, and its recent implications for the European theatre in “The Iraq Effect”.

Nesser uses inductive case studies as his method to define the specific components of a jihadi terror cell on a micro-level. These dynamics and components of a terror plot are then analyzed on the mid-level, and he connects these ‘dots’ to a decentralized jihadi strategy for Europe on a macro-level. He further distinguishes these cases in top-down/leader-led and bottom-up/leaderless terrorist approaches.

In his chronological approach, Nesser covers almost twenty-five years of Islamic-motivated terror attacks and exhibits both the important continuities and the changes over time. His in-depth analysis of the specific components of a European jihadi terror cell is one of the most complete available. He identifies four overlapping categories within this setup. The essential organizer with jihadi combat experience and links to global terrorist organizations and networks is the entrepreneur. Similar in his tasks and background to the entrepreneur, the protégé is the more junior and less experienced member of the cell. He often is second in command and brings essential technical and other skills to the organization. The followers in Nesser’s typology within a terror cell are categorized as misfits and drifters, who are often socially marginalized and criminalized young individuals. These components of a cell or network are embedded in complex Islamic terrorist plots and a conflict-driven jihadi strategy in Europe, and it is all connected.

With his research Nesser provides one of the most comprehensive insights into the mechanisms and interdependencies within Islamic terror cells and networks, both within Europe and connected to the continent. His critical analysis of existing research covers the most notable theories like Marc Sageman’s “leaderless jihad” and Bruce Hoffmann’s “leader-led jihad.” His final case study examines the AQ related attacks on the Charlie Hebdo offices in Paris in January 2015. Nesser develops a theoretical framework which is useful in analyzing the most recent jihadi-motivated attacks on European soil, Paris, Brussels, Nice, and across Germany.

Islamist Terrorism in Europe is neither a novel-type compilation of crime stories, nor an anti-Islamic conspiracy-theory book. This book belongs on the bookshelf of any military and law-enforcement officer or analyst who deals with Islamic terrorism. Its analytic style and forensic approach makes this book interesting for social scientists. One could wish this book and its insights would have been available a decade earlier.

Daniel Karl Alfred Sigler is an active-duty German Army Officer. In his 19 years of service he has served in the Airborne Infantry, and commanded both a parachute commando company and a training battalion at the International Special Operations Training Center in Germany. He has deployed multiple times to Afghanistan and Iraq. He holds an M.S. in Social Psychology and is currently a candidate for an M.S. degree in Defense Analysis and Strategic Studies at the Naval Postgraduate School in Monterey, California.

Good to see a review of this excellent book.

There is a bonus too: the research footnotes are supplemented by an online appendix on the attacks 1974-2015 via: http://www.hurstpublishers.com/wp-content/uploads/2015/11/Islamist-Terr…

Partly explained as 'It offers an open source chronology of planned, prepared and executed terrorist attacks by actors linked to, or inspired by al-Qaida (and like minded groups) in Western Europe, since 1994. The chronology is mainly based on media sources, but also on reviews of judicial papers and expert interviews.'