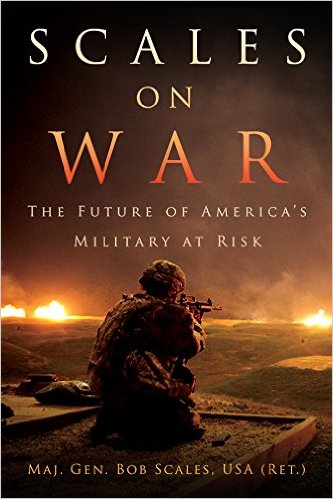 Simply, the closer the killing the more intimate and primal the killing becomes. The more intimate the killing, the most superior one needs to be to conduct such primitive action and win. If politicians and Armies choose to employ intimate close killing infantry forces, and alike ground forces, they must firstly institutionally recognize the full moral truths and ethos of this odious undertaking and thus the requirement for the highest virtue of trained human to conduct it, or risk their fatal sacrifice.

Scales on War purposely exposes the reader to the ground truths and mortal realities of the politically unfavoured means and the un-pretty practice of dismounted close combat and intimate killing conducted by world Infantry forces, or alike, from the past though to today’s modern conflicts.

Major General Bob Scales (USA Ret.) is well qualified to author such a publication as this. Scales served 33 years in the US Army as a career Artillery officer and paratrooper, served in the fatal close fights of Vietnam through to the modern Middle East hybrid conflict era and completed his PhD in History. Scales grounds his analysis through combining his professional career and academic experience with findings from across the modern global dismounted close combat community (DC3) of Infantry intimate killing forces (primarily regular infantry units, special forces units, their reservists and any other alike forces conducting such warfare) to frame the current dynamics and modern application of such tactical action from a western perspective.

Scales contextualises the transition of epochs between mounted and dismounted combat through modern warfare balanced against their adversaries faced at the time. He purports that the current epoch demands a primarily dismounted approach for the western society to conquer the enemy of today. An enemy that fights an irregular dismounted style of war amongst complex terrain and human populations who has continuously outlasted the west and their expensive platform orientated militaries of the late 20th and 21st century; through their use of time, persistence, a will to learn and willingness to die. Scales concludes that only soldiers with rifles and a will to win in the close fight will defeat them. Scales on War asserts five core themes:

Connects global thinking on the ultimate intimacy of dismounted close combat killing, and its conduct as the primary task of Infantry Forces. Scales reaffirms the austere and intimate nature of close combat and aligns it to stoic literature, Viktor Frankl’s meaning for life, David Grossman’s works on intimacy in killing and General Jim Mattis’ (Retd) remarks on the primitive nature of close warfare and adapting to irregular conflict.

Scales postulates that intimate killing is a primal aspect of warfare. In the most basic sense it involves a clash of two warriors. That when all the distant effects of expensive western technologies and platforms are exhausted and the close fight begins; overmatch with the adversary is returned to a more equal human to human duel of which the one with the greater cunning, strength, guile, ruthlessness and will to win determines who is left. At such close range the enemy’s weapons, small arms, mortars, and explosives become as deadly as ours. Scales also reaffirms intimate killing is the ‘primal’ task of infantry and that killing close is the essence of what it means to be an Infanteer. Scales also then appropriately goes on to inclusively link those alike warriors that are also at times required to share the close combat space of the infantry function of intimate killing, as incidental fighters.

Connects the global dismounted close combat intimate killing community. The Infantry function includes: Army, Marine Corps, and Special Forces troops who occasionally share the close combatant space with like minded specialists. Throughout his book Scales connects the DC3 through the constant for all of them to train for and conduct dismounted close combat intimate killing and share the crucible of courage (grit and resilience) as the core characteristic trait of the infantry function. On a visit to US SOCOM in the Middle East in 2009 Scales notes his observation: mess halls full of Special Forces, Marines, Army Soldiers and Infantrymen from Australia, New Zealand, Poland, Great Britain and France who all to one degree or another were either infantry or performing an infantry-like function.

Affirms that dismounted close combatants should be mass selected not mass produced. Today’s media depicts sailors, airmen, and marines as eager volunteers who seek to join war-fighting elites. Soldiers in contrast have traditionally been depicted as the drafted poor who found themselves in foxholes due to bad draft numbers or bad grades at school. Scales assesses that modern society has become culturally averse to infantry fighting, and that due to the extreme nature of intimate killing all infantry forces used for such tactical action should be selected from second term appointments, undergo lengthy initial training cycles, be aged 25 years or older and not mass produced. He uses repetitive examples for his analysis, most notably from US SOCOM, to show that more older and experienced soldiers make better decisions and perform higher in close combat due to having greater mental development and an understanding of emotion, and cause and effect. Scales also uses analogy between General George Patton’s and General Stanley McChrystal’s employment of close combatants to derive that contemporary close combat is best fought by highly trained teams of teams using small unit dominance theory.

Realises that the current adversary is possibly the best infantry force in the world. Scales discusses that we have met our current enemy ‘socially insensitive…tyrants who are here now’. To paraphrase Scales, this threat is a known known (Common Dogs) and we must be able to fight and defeat it. In general the superpower types remain known unknowns (Dark Horses) of which we must also be prepared to fight. And the unknown unknowns (Black Swans) will remain out there for which we must be prepared to survive against if they arrive. Scales relates this current adversary to employing the tactics and theories of Colonel Yahara, Mao Zedong and Ho Chi Minh to target the western world’s CoG ‘killing westerners and conducing protracted wars’. Scales even goes further to propose a futurist way to think of the future adversaries, through a historical-behavioural approach which comes from the realisation that regardless of region, actor, motive, geopolitical circumstances, intensity, or type of conflict, our enemies have consistently repeated behaviours that they believe offer the greatest chance of success against us in battle.

Gives suggestion for the future dismounted close combatant. Scales reaffirms a number of ways to train and modernise close combat forces. Most notably, for close combat leaders being selected and learning early on in their careers to command by intent and intuitive decision making and understanding the psychological forces of close combat such as trust and touch phenomenon (buddy chatter) in combat. Through modernisation institutionally avoiding issues similar to Ripley’s civil war rifle and the Vietnam M16 ghosts, and codifying that no ground forces will go into close combat without drones overhead and sensors in the hands of every small unit involved. Scales also discusses Universal carriers, armoured and infantry fighting vehicles in support of infantry, in irregular wars infantry needs to be advanced with support from the systems on board the vehicles, as they ferret out elusive enemies hiding in places an armoured vehicle cannot reach or see. In this modern era vehicles also need to act as the virtual hub for the networked dismounted force. Whilst ultimately it’s a contest of human wills the firepower system must so weaken the enemy that close-killing by infantry forces becomes a coup de grace rather than a battle of attrition that gets soldiers needlessly killed. Aligned to the training of world class NFL football teams, Scales reinforces the core training process of repetition training and the use of cognitive gyms, combat immersion trainers and world class training opposing forces to build the best close combatants. ‘to improve the fighting power of close-combat soldiers, to focus on what goes in the soldier as much as what goes on the soldier. Finally as a father of two daughters commissioned into the US Army Scales also touches on the thinking of mixed gender close combat fighting teams and the various archetypes of military leaders for combat.

Scales on War Applied to the Australian Context

In reading this prose the function and purpose of the dismounted close combatant as a part of strategy becomes further evident in past and present strategic literature. Colin Gray a respected contemporary strategist endorses Rear Admiral Joseph Wiley’s war strategy literature Military Strategy: A General Theory of Power Control as fifth subordinate to Carl von Clausewitz On War, of which has no equals. Wiley discuses the aim of war as ‘some measure of control over our enemy’ and summises his four ideas on War: There will be war, that the aim of war is some measure of control, that the pattern of war is not predictable, and that the ultimate tool of control in war is the man on the ground with a gun.

Scales on War revisits the employment and viewpoints of primitive dismounted combat and close killing Infantry forces in the 21st century. The Australian Infantry’s seek out and close with the enemy, kill or capture him, seize and hold ground and repel attack role remains as relevant in this age as it did when it was first derived. Australia has world class Infantry forces based on a core dismounted combatant community who embody the will to win through ethe Dare to Win, Without Warning, Duty First. This community as part of future Australian Defence Force will have leading edge land, air and sea platforms to force project them into battle and provide intimate support and force protection; however their primary function will always be, to be ready and able to win the dismounted close intimate fight by day or night, regardless of season weather or terrain.

Scales on War is an excellent book for current serving personnel of all ranks with a realist approach to warfighting and anyone with the intent to work with the DC3, to be an Infanteer.

‘It is only a matter of time before we collide with another enemy filled with the hubris that comes from past success. If the past is prologue, a thin line of close combat Marines, Soldiers and Special Forces will be called upon to end it….Infantry are America’s canary in the coal mine, when the infantry loses its edge America loses its ability to win its wars’.

The views expressed in this article are the authors and not necessarily those of the Australian Defence Force.

A. Sparkes is a military officer in the Australian Defence Force and has deployed on multiple unilateral and coalition operations and international engagements at both the tactical and strategic levels. He has tertiary qualifications in Strategy and Management and has a strong interest in global order and the profession of arms.

The use of phrases like "dismounted close combat community" is a symptom of a real problem armies have; faux intellectualism. Western armies have convinced themselves that graduate degrees in the Arts and the adoption of the baffle gab that goes with academia shows that they are "professionals". The writer's bio is an excellent example of the lack of clarity this sort of thinking generates. Cue the quote from Clausewitz.

I might track down this book just to see what Scales actually wrote and if he spells out any practical suggestions. I'm keen to find out about "mixed gender close combat fighting teams".