Oklahoma teen Carina Saunders was brutally murdered as a means to frighten another woman into cooperating with a human trafficking ring, police have reported.

The 19-year-old who graduated from Mustang High School just last year was tortured, dismembered and beheaded. Parts of her body were found stuffed in a duffel bag and dumped behind a grocery store on Oct. 13. She was identified by her distinct tattoos.

Jimmy Lee Massey, 33, has been arrested on first-degree murder charges. A 20-year-old woman, whose name has not been disclosed, came forward as a witness to report she had been kidnapped by Massey and forced to watch the brutal murder in Bethany, Oklahoma, reports The Daily Mail.

Massey was already being held in Oklahoma County jail on drug charges. He has admitted to investigators that he kidnapped the 20-year-old woman and forced her to watch as others tortured and killed Saunders. He also provided details about the crime.

Both women reportedly knew Massey separately, but there is no evidence that the two women knew each other.

Police Chief Phil Cole said: "Evidence in our investigation has led us to believe that she had been expected to provide certain things to this trafficking group and that she had not been performing to their satisfaction."

"We believe there were other people there and they're now the focus of our investigation."

Another man, Francisco Gomez, was arrested in connection with the murder. As Gomez was led into the police station in handcuffs last night, he yelled to reporters "I've got nothing to do with no drugs, no murder, no nothing."

"We surrounded a possible address for Mr Gomez and he surrendered peacefully. He was booked on a trafficking charge," authorities said.

Despite the fact that she was known to run with a rough crowd and use drugs like marijuana, methamphetamine and Ecstasy, Saunders was a "random" choice for the killers, according to police.

Cole said, "Our information right now leads us to believe she was a random choice, as sad as that is. She had relationships within these loosely associated people, and I think that she was a victim of opportunity."

Oklahoma County Assistant District Attorney Scott Rowland said a judgment will be made in January…[1].

For a detailed 14:50 minute news video of a law enforcement press conference related to this incident see NewsOk, http://newsok.com/another-arrest-made-in-bethany-killing/article/3633876.

Who: Carina Saunders, 19, born in Oklahoma City and grew up in Mustang, Oklahoma [2].

What: Torture, beheading and dismemberment.

Why: Used as an example to terrify a group of women who were victims of a human trafficking (prostitution) ring and an associated drug trafficking ring [4]. Note— some of the individuals involved were members of both rings.

Tactical Analysis: A 20 year old woman (name withheld by the police to protect her identity) was kidnapped, blindfolded and transported to an unknown location (some type of room) by Jimmy Lee Massey, age 33, late Sunday 9 October/early Monday 10 October 2011. She was then forced to watch the torture killing of Carina Saunders by a small group of individuals.

Carina Saunders, the victim, was a known user of marijuana, methamphetamine and Ecstasy [1]. She had multiple tattoos. One of which is a ‘Kween Spade’ with a spade in an oval between her breasts [5]. No other upper body tattoos or tattoos on lower legs/ankles are evident from social networking photos. Due to her associations, she came in contact with the network of some of the members of the human trafficking and drug trafficking rings. Per the police, she appeared to be a random target of opportunity in this torture killing. Little mention has been made of the condition of Saunders from the time of her kidnapping to her death, though similar incident patterns would suggest that she was most likely physically and sexually abused.

The incident intent of the criminal gang(s) was for the 20 year old woman to let the other victims (i.e. sex slaves) of the ring know that, if they did not cooperate with gang member orders, this is what would happen to them too. The woman who witnessed this crime instead went to the police and reported the incident. Jimmy Lee Massey (aka “Big County” or “Country”) was subsequently arrested on 4 November 2011 and booked on drug trafficking warrants— he had also been the focus of a large narcotics investigation. Massey was read his Miranda Warnings and Rights, then waived them, and proceeded to discuss his part in the kidnapping of the 20 year old woman, the torture killing of Saunders, and the dismemberment of her body and its disposal. He now faces charges, filed on Tuesday, 20 December 2011, related to kidnapping, assault and battery, and murder [6].  It should be noted that “Massey also identified other persons that were involved and present in the room and involved in the murder.” [6].

Another suspect, Francisco Gomez, age 31, was then taken into custody on 20 December 2011 [7]. Per a law enforcement press conference pertaining to this incident, Gomez is thought to be a US citizen, however, quite a few Mexican nationals have been implicated as also having ties to this incident and/or the drug trafficking ring [8]. This is an ongoing investigation with more suspects and/or persons of interest being sought.

Whether this incident is directly linked to Mexican cartel/gang involvement or inspired by such killings is unknown at this time. Of note is that a NewsOk report has its story on this incident linked to a page entitled “Cartel Connection: Oklahoma’s #1 Threat” with a state highway map and drug cartel-based crimes superimposed over a map of the state of Oklahoma [9].

This torture killing (decapitation) incident is of much concern because it has all the hallmarks of a Mexican cartel killing. If this incident is directly tied to Mexican cartel or gang members, it will neither be the first nor the last such incident, with a small but growing, number of torture killing (decapitation) incidents now having taken place domestically over the last decade. These include the following US incidents (see Table 2.) listed in Pamela L. Bunker, Lisa J. Campbell, and Robert J. Bunker, “Torture, beheadings, and narcocultos” in Narcos Over the Border [10]: 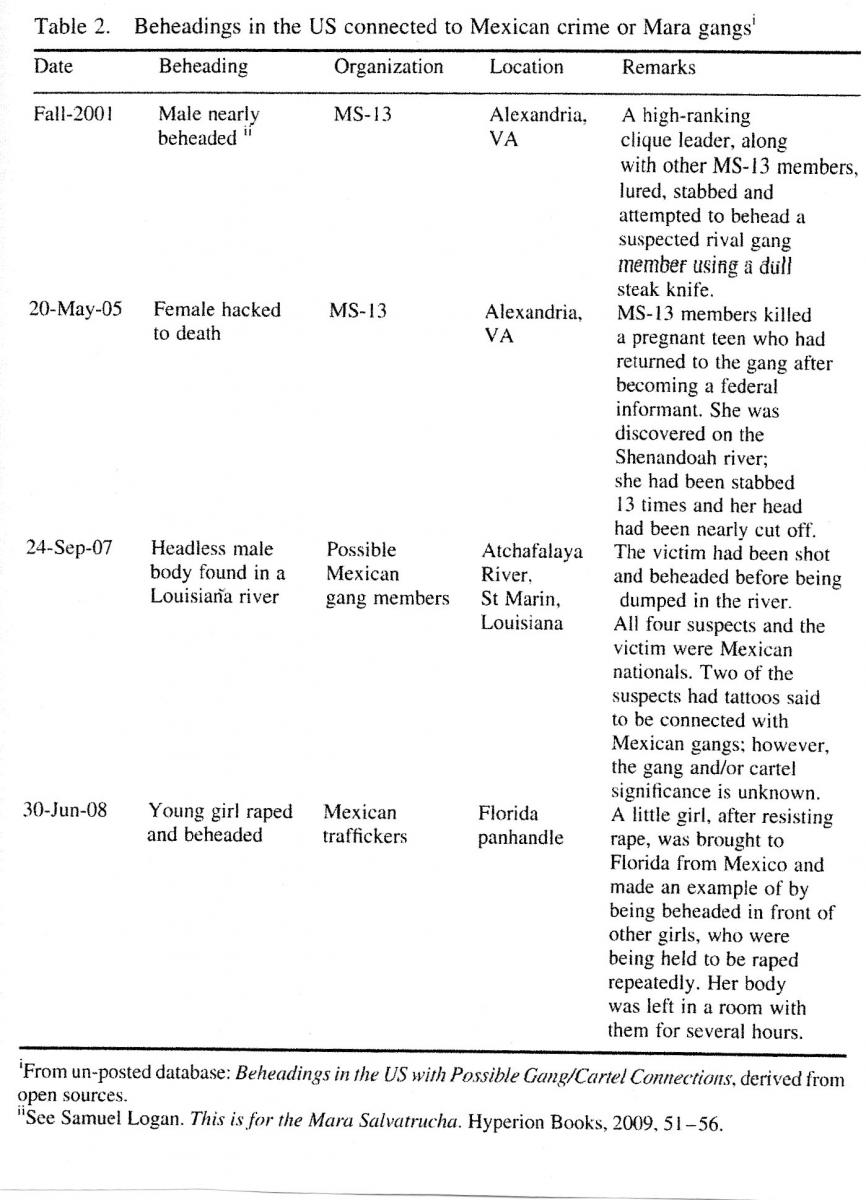 To this listing can be added the more recent Chandler, Arizona beheading incident which took place in October 2010. In that incident, Martin Alejandro Cota Monroy was killed in his apartment by the PEI-Estatales/El Chapo drug cartel in retaliation for stealing a 400 pound load of marijuana [11].

There should be little or no distinction between proven cartel linked crimes or those merely inspired by such crimes as they both result in the same outcome for its victims. The only difference that matters would be from an LEO aspect, to determine links between known/unkown criminal elements operating under orders or in parallel with the larger cartels. Perhaps there can be another politician that says that securing our borders is a waste of time?

<blockquote>Mexican Cartel Tactical Note #8:</blockquote>
or
<blockquote>Whether this incident is directly linked to Mexican cartel/gang involvement or inspired by such killings is unknown at this time. </blockquote>