Merry Christmas to All, and to All a Good Lunch!

Our best wishes to you and yours this Christmas and for the new year. While not US Marines, these guys are our distant rogue cousins - much like Abu Muqawama - and we extend them a hearty Semper Fidelis this Christmas. Hat tip and Merry Christmas to Jules Crittenden at Forward Movement. 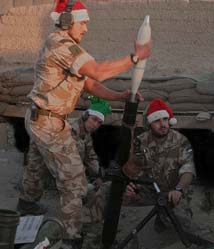 The rest of the story via The Daily Telegraph

Royal Marines fired mortar rounds at the Taliban while wearing Santa hats after their Christmas Carol service was interrupted by an attack.

Attempts at bringing temporary normality to the festive season in Helmand by holding the service were shattered when the men came under fire from the Taliban.

Throwing aside their hymn sheets, the men took their positions.

But such was the urgency of the situation the men kept the santa hats on and did not change into helmets as they were pictured firing round after round of mortar fire to see off the enemy.

Once the skirmish was over -- with no injury to the British soldiers -- the men resumed the carol service before tucking into turkey for Christmas lunch.