U.S. General: Mosul to be 'Long and Tough' Battle, But Iraqis Prepared

U.S. General: Mosul to be 'Long and Tough' Battle, But Iraqis Prepared

The long-anticipated campaign to reclaim Mosul from the Islamic State began Monday. It is the largest military operation in Iraq since U.S. forces left five years ago.

Lt. Gen. Stephen Townsend, who commands the U.S.-led coalition targeting Islamic State in Iraq and Syria, cautioned it could take weeks or even longer to recapture Mosul.

"This may prove to be a long and tough battle, but the Iraqis have prepared for it and we will stand by them," he said. 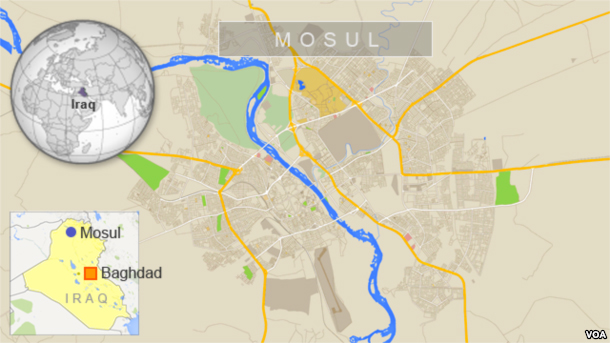 U.S. Defense Secretary Ash Carter said this is a "decisive moment" in the campaign against Islamic State.

"We are confident our Iraq partners will prevail against our common enemy and free Mosul and the rest of Iraq from ISIL's hatred and brutality," he said in a statement.

In the hours before the announced start of the offensive, the Iraqi Air Force dropped thousands of leaflets on Mosul to warn residents.

Humanitarian workers, though, say it is unclear what Mosul civilians are meant to do. They have criticized war planners for failing to mark out clear escape routes for civilians.

U.N. humanitarian chief Stephen O'Brien said there is space for 60,000 people at camps for those displaced by the fighting, and soon those facilities will be able to accommodate 250,000 people. But he said in the worst case scenario as many as 1 million people may flee their homes.

"I renew my call on all parties to the conflict to uphold their obligations under international humanitarian law to protect civilians and ensure they have access to the assistance they are entitled to and deserve. Nothing is more important," he said.

The Norwegian Refugee Council highlighted similar concerns, saying it feared the humanitarian consequences of the fight for Mosul "will be massive." The group said the most important priority is making sure civilians have access to safe routes out of the city.

Mosul residents contacted by phone and Skype say IS fighters - many veterans from battles in neighboring Anbar province - have blocked major roads and bridges in and out of Mosul. The jihadists have fanned out throughout the city and planted mines and explosives and warned civilians not to attempt to leave.

For weeks, the assault on Mosul has been expected, but disagreements have flared between coalition allies over how the greater Mosul region of Nineveh will be governed after liberation and who should be involved in the fight to get rid of IS. Kurdish claims earlier this month that any territory the Kurdish Peshmerga captures will remain part of Kurdistan have infuriated the Shi’ite-dominated government in Baghdad.

On Saturday, Turkish President Recep Tayyip Erdoğan rebuffed once again demands by Iraqi Prime Minister Abadi to withdraw about 2,000 Turkish "military advisers" from a base 20 kilometers from Mosul where they have been training local Sunni fighters in a militia called Hashd al-Watani. Erdoğan has insisted Mosul should be controlled by Sunni Muslims, and along with local Sunnis he has warned Shi’ite militias to stay out of Mosul.