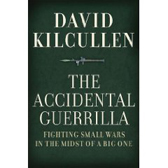 The Accidental Guerrilla: Fighting Small Wars in the Midst of a Big One by Dr. David Kilcullen.

I'd like to share with the Small Wars Journal community my review of Dr. David Kilcullen's The Accidental Guerrilla: Fighting Small Wars in the Midst of a Big One - recently published in the RUSI Journal.

This author has previously argued that David Kilcullen has done greater wartime service to the United States than any foreign adviser since Polish Colonel Thaddeus Kosciusko helped the fledgling Colonial Army defeat an occupying power that shall remain nameless here. As a friend of Kilcullen and president of the centre where he is a senior fellow, my objectivity on this matter may fairly be called suspect. Nevertheless, that caveat made clear, The Accidental Guerrilla offers incredibly valuable insights on the small wars that scar the face of the planet today and present such difficult challenges to the foreign policy and military establishments of the Western world. If it is read as widely as it deserves to be, this book may be the most important service Kilcullen has yet rendered to his adopted country, and to the world.

The full review can be found here.

Indeed, I had the pleasure of reading an advance copy and it is, unsurprisingly, the single best book on terrorism and insurgency to be published in the post-9/11 era... and as someone who has read most of them, this is the highest praise I can muster. This book is absolutely required reading, and his concluding chapter is worth the cover price alone. Don't wait, order this book asap.