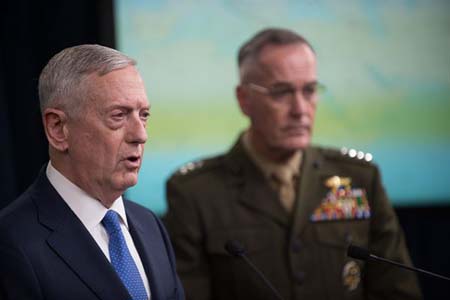 The U.S.-led coalition against the Islamic State of Iraq and Syria will continue to build on the progress made to date to accelerate the campaign to annihilate the vicious group wherever it tries to form, Defense Secretary Jim Mattis said during a Pentagon briefing yesterday.

Mattis was accompanied by Marine Corps Gen. Joe Dunford, the chairman of the Joint Chiefs of Staff.

The terror group seemed to appear from nowhere two years ago and swept across Syria and Iraq, causing death and destruction wherever it touched. ISIS affiliates formed in Afghanistan and North Africa. And swarms of foreign fighters sought to reach Raqqa, Syria, the terror group’s self-styled capital.

The United States is leading the campaign to defeat the terror group, and crush the idea that ISIS is invincible.

Taking the Fight to ISIS

“Thanks to the leadership and authorities granted by President (Donald J.) Trump, thanks to the spirit of dozens of nations committed to this fight, thanks to the nations whose troops have gone toe-to-toe with this terrorist group … we have retaken over 55 percent of ISIS territory there in the core,” Mattis said. “Over four million people have been liberated. And not one inch of territory seized from ISIS has been … recaptured by them.”

Soon after taking office in January, Trump ordered a review of the effort against ISIS. Two changes came from that review: Delegation of authority to lower command levels, and the president directed a tactical shift from shoving ISIS out of safe locations in an attrition fight to surrounding the enemy in their strongholds, so we can annihilate ISIS,” Mattis said.

“The intent,” he said, “is to prevent the return home of escaped foreign fighters.”

All this was done with no change to the rules of engagement or changes in protecting innocent civilians caught in the fighting.

“Since this began in 2014, the coalition has strengthened and expanded,” the secretary said.

There are now 68 members in the counter-ISIS coalition, Mattis said. Those nations and affiliated organizations are sharing intelligence, providing troops and funds for combat and for the post-combat recovery. A total of 26 nations contribute more than 4,000 non-U.S. troops on the ground and in the air.

“Our recent coalition meetings in Brussels, Copenhagen and elsewhere reflect an energized campaign among contributing nations partnering with, of course, the Iraqi security forces in Iraq and the counter-ISIS forces in Syria,” Mattis said.

This effort has “reduced ISIS-held territory, limited their freedom of movement, destroyed a great deal of their leadership, reduced the flow of foreign fighters into and from the region, diminished their financial resources and, I think, perhaps most importantly, we’ve undermined the credibility of their narrative that there is a physical caliphate in Iraq and Syria,” Dunford said.

In Iraq, U.S. and coalition forces provide equipment and intelligence to Iraqi security forces, the chairman said. Coalition pilots bomb ISIS targets and coalition advisors work with Iraqi leaders on the campaign. But it is the Iraqis paying most of the cost, the general said.

“In Mosul alone, they’ve suffered approximately 980 killed and over 6,000 wounded,” Dunford said of Iraqi losses in the fight against ISIS.

However, the Iraqi forces have gotten much better and far more competent, the chairman said.

“Just as an aside, in addition to the competence that they’ve demonstrated Mosul, and the sacrifice, the one thing I’ve seen over time, in the 15 months I've been back and forth visiting in Iraq, in this particular assignment, is the confidence of the Iraqi leadership,” Dunford said. “Compare the fall of 2015 to today, it’s very clear … who is in charge, and the level of confidence of the commanders in their ability to lead and in their soldiers’ ability to fight is remarkably different than it was a short time ago.”

In Syria, working with Turkey and partnered forces, the coalition has sealed the Turkish-Syrian border, stemming the flow of foreign fighters, weapons and money to ISIS, Dunford said. The general said at its peak there were about 1,500 foreign fighters crossing that border each month. That has dropped to less than 100 today, he said.

And Syrian Democratic Forces are isolating Raqqa -- the center of ISIS.

“We're also taking the fight to ISIS outside of Iraq and Syria, attacking their affiliates and any groups that claim allegiance,” Dunford said. “ISIS is a transregional threat, and we have a global approach.”

The chairman told reporters he is working to expand the already huge coalition against ISIS. “I'm working very closely with more than 60 of my counterparts to expand the coalition that we have in dealing with ISIS, and our priority clearly is to prevent attacks against the homeland,” he said. “Our strategic approach is to cut the connectivity between ISIS affiliates and associates, and that's specifically the foreign fighter flow, their illicit resources and their message.”

The effort is more than a military effort -- it is a whole of government approach, and Brett McGurk, the president’s special envoy, said this is “enabling an anaconda-like approach to suffocate ISIS of its territory, finances, propaganda and ability to move foreign fighters.”

This cooperation has enabled closer political coordination between local, regional and national governments to help return people to their homes after the battles are won through an innovative post-conflict approach based on empowering people at the local level to restore life to their communities, McGurk said. The effort is being led by Germany, Italy, France, the United Arab Emirates, Norway, the United Kingdom and other key contributors.

The initial focus on de-mining key facilities is a critical coalition focus. “Iraqis, trained by our coalition supporting demining, have now cleared 34 tons of explosive material,” he said.

In Iraq, 1.7 million Iraqis are now back in their homes, McGurk said.

“That record is historically unprecedented in a conflict of this nature, and we give tremendous credit to the government of Iraq and local leaders who have worked cooperatively to stabilize local areas and return local populations,” he said. “To date in Mosul, 116,000 displaced civilians have returned, 250,000 boys and girls are back in school and we're working to ensure that these trend lines continue.”

McGurk said the coalition will attempt to use the same model in Raqqa with local leaders planning for “the day after ISIS.”

Right now we are in fact seeing IS 2.0 as they while still holding the old city part of Mosul and the ISF stated it would have been captured by yesterday and they have not even started clearing the old city....

IS has reverted now to a guerrilla war and has been nickel and diming the ISF in countless ambushes and destroying both equipment and manpower....AND this is critical they have pulled back into the Diyala River Basin where they always went to survive....not even ISR was able to find some of their bunker complexes...much as in VN...

This so called eradicate from this earth is a really long way away I am afraid and to many are celebrating tactical wins ...not a strategic win...

There will obviously be different views on this, but I think the switch from attrition to annihilation is appropriate, even if the decision was made too late to reap maximum benefit from. Late or not, it is still preferred over continuing a strategy of attrition.

(Quote) "Delegation of authority to lower command levels, and the president directed a tactical shift from shoving ISIS out of safe locations in an attrition fight to surrounding the enemy in their strongholds, so we can annihilate ISIS,” Mattis said.

“The intent,” he said, “is to prevent the return home of escaped foreign fighters (End Quote)

To clarify, to pursue an annihilation strategy is an attempt to, as rapidly as possible, destroy an adversary's ability to wage war by destroying his military forces (or whatever means the adversary uses to wage war).

In U.S. joint doctrine, annihilation and attrition are considered the same strategy, but most accept that the idea that the difference between the two is that annihilation seeks rapid destruction of an enemy's force (DESERT STORM), while attrition seeks the same end, but by design or out of necessity, it is a slower process to the same end. For example, after al-Qaeda attempted to stand up to the U.S. military in a decisive battle against the U.S. once in Afghanistan shortly after the 9/11 attacks, we both failed to annihilate each other's war making capacity. Out of necessity, our strategy transitioned to one of attrition (man hunting if you will), but still pursuing the same strategic end, which was to destroy al-Qaeda.

Move forward to today, since ISIS has presented the opportunity for decisive battle, we have to consider the pro's and con's for pursuing that option. The con is we have no idea what will follow the collapse of ISIS's control of the areas they control. We also don't how Russia and Iran will react when our loosely mutually agreed upon reason for being there no longer exists. There is no plan for the day after, so we'll be in a reactive mode trying to mitigate undesired effects as we attempt to shape the future of the region in a way that reduces a threat to our interests.

The pros are relative to current situation. Allowing the situation to continue only allows ISIS to continue to evolve it means and ways for waging war (UAVs, chemical weapons, more sophisticated information operations, etc.), and it also allows our competitors to achieve a position of advantage compared to the U.S. In this case I'm referring to Assad, Iran, Russia, and even al-Qaeda who are quietly rebuilding and positioning for the next phase of this conflict. We must accept that pursuing an annihilation strategy will not result in a win at the strategic level, but the pro's are that it will likely to put us in a relative position of advantage at the strategic level to shape the region and it will reduce the threat of ISIS globally (limiting the return of foreign fighters). We'll never be able to measure a negative, so that speculation will remain an assumption that can't be proved. There are other reasons, but to keep this a reasonable length I'll stop here.

The other military strategy in contrast to annihilation/attrition is an exhaustion/erosion strategy where an opponent attempts to erode his adversary's political and social will to continue the fight. It normally involves imposing costs using military force, terrorism, etc., but the objective isn't to destroy an adversary's ability to wage war, just make him tired of doing so. The real battle is in the information domain to target the cognitive or will to continue resisting. We effectively supported an erosion strategy against the USSR in Afghanistan, and the USSR did the same to us in Vietnam. This is also the type of strategy that al-Qaeda is still employing against us. In comparison it seems that ISIS is less sophisticated and seeks a conventional battle.

Once that battle is finished, we won't know what ISIS 2.0 will look like until it emerges. We can certainly make educated guesses and posture accordingly in an attempt to get ahead of that problem. ISIS 2.0 may not be as important as the competition and potential conflict between states in the region, another threat we must attempt to forecast and posture for. Uncertainty has always been a factor war and international relationships, yet we can't allow uncertainty to paralyze us.