A Woman Warrior Ahead of the Times: A SWJ Book Review of An English Woman-Sergeant in the Serbian Army by Flora Sandes

A Woman Warrior Ahead of the Times: A SWJ Book Review of An English Woman-Sergeant in the Serbian Army by Flora Sandes 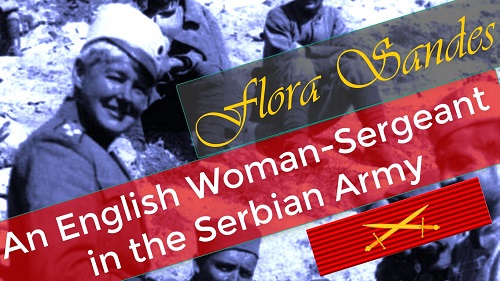 One night exploring the catalog of the free audiobooks of librivox.org, I ran across an odd title. An English Woman-Sergeant in the Serbian Army by Flora Sandes published in 1916. Not having heard of the story of Flora Sandes before, I was instantly intrigued. Having been the only English woman to serve in a uniformed service during in the First War War and even receiving a commission as a Captain at the end of the war, I am surprised that more hasn’t been done to remember this remarkable and ground-breaking woman.

Before we get into the book, I wanted to tell you a little about Flora Sandes’ life before the war. She was born 22 January 1876 in Yorkshire to an Irish Family. One could assert that she challenged the traditional gender roles of her society since childhood. She enjoyed horse-back riding and rifle marksmanship from a young age. In 1907, she joined an all-female para military group called First Aid Nursing and Yeomanry (FANY) that further advanced her knowledge of military skills. In 1914, she attempted to join the Red Cross as a nurse in support of the First World War but was rejected due to lack of qualifications. She eventually joined a St. John’s Ambulance unit that sailed 12 August 1914 to support Serbian Army, an English Ally, in their fight against the Austro-Hungarian Empire. She would have been 38 years old at this time.

What would become the book An English Woman-Sergeant in the Serbian Army is a collection of journal entries and letters that she wrote between 1915-1916 when she joined the ambulance of the Second Infantry Regiment of the Serbian Army. During this time period, the Serbian Army was in constant retreat having the Austro-Hungarian forces pushing them out of Serbian territory into Albania. I believe this account to be highly accurate and true to her experiences during this time. As with the faults of human memory, records closest in time to the actual events tend to be the most reliable as the human memory can be shaped through revisionism as new information about the event is learned from others. She also discusses some of her errors in her writings. For example, she recalls being with another nurse and being given food while the other nurse slept. She ate all the food not thinking of rationing the provisions or thinking of her peer. She records this error in her writing and how she intends to correct this mistake in the future. With the presence of these types of self-admitted errors in her writing, I will assume that Flora Sandes was honest in her journals and didn’t attempt to hide the facts as she knew them. While this book was made from a collection of writings and sold to support the Serbian war effort, I do not believe this was the original intent of Flora Sandes. For this reason, I have more faith in the accuracy of this book than one that could have been written years later with a specific propaganda purpose in the mind of the writer. Writing as she went, I believe this book is free from many revisionist or memory errors that occur in attempting to record memoirs years after a conflict and in opposition of other accounts.

I greatly enjoyed this short book and found it to be filled with useful leadership advise that still applies today. From discussions on discipline to caring from the troops to understanding cultural differences, the lessons contained in this book are useful to soldiers even in the modern military. I would recommend this book to be read by modern squad-leaders and up. Not only to gain the valuable leadership lessons in this book, but also to get exposed to the story of this exceptional woman.

While some might claim that Flora Sandes’ story demonstrates the ability for modern females to serve in combat arms position, I would be hesitant to make such an assertion. While it is true that Flora Sandes was an exceptional soldier and leader, the way she was treated and the superior British equipment she possessed does not provide a fair comparison to what the common Serbian infantrymen experienced during this time. She was a gifted nurse and leader. Better food and accommodations where provided to support these needed skills in the Regiment. However, I will say that Flora Sandes does provide a quality example of how a leader should be constantly seeking to make the lives of their soldiers more comfortable even if it comes at one’s own expense (like her sacrifice of her entire year’s ratio of sugar to give her men a chance to have a traditional drink). Without a doubt when Captain Flora Sandes engaged in combat, she clearly displayed the highest degree of valor on the battlefield and can be a true inspiration for all soldiers that learn her story.

In the end, I am really surprised that the story of Flora Sandes isn’t better known. I would have thought that Hollywood would have jumped at a chance to make a movie about her by now in a societal climate that searches for female empowerment stories. For those that would like access to this book, you can do for free scanned book here. It is also available as an audio book here. I have also made a short video covering the important leadership lessons that Flora Sandes provided in this book that is available here.