The day before our arrival, the Peshmerga had just completed a two-day offensive against Islamic State (IS) fighters, and had captured the Khazir area (the mountainous area stretching roughly from Telskuf in the east to Kalak) and the northern approaches to Mosul.  As a result of this success – which comes on the heels of the successful operation to secure Erbil in early August and the successful joint Iraq Army and Peshmerga ground operation with US air support to recapture the strategically significant Mosul dam on 18 August – Mosul is now surrounded on its northern and eastern flanks.

This is part of a deliberate policy by the Peshmerga to surround gradually and methodically the urban areas controlled by the Islamic State (IS) rather than launching direct attacks into urban terrain.  This is in clear contrast to the ongoing attempts by the Iraqi Army to launch attacks into urban areas controlled by IS, such as Tikrit.  In fact the Kurds told us that they had advised the Iraqi army numerous times to avoid directly attacking urban areas before they had established control of the surrounding ground. 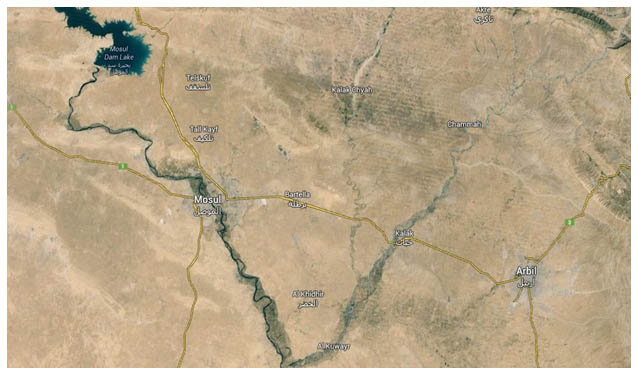 We were escorted to the front lines in Ninewa province by the Peshmerga and provided with security protection and an ambulance and medical staff.  The area was insecure, having been recaptured from IS only 24 hours previously.  Our Peshmerga guides had to use Dr Rowsch’s name to negotiate our way through several checkpoints, with nervous Peshmerga fighters often concerned about letting non-combatants into what they regarded as an insecure zone.  As we got close to Mosul, Peshmerga units at strategic checkpoints would attach themselves to our convoy in order to not only protect us from potential IS counter-attack, but also to vouch for us at the upcoming checkpoints.

The attitude of the Peshmerga, once they realized who we were, was extremely welcoming.  Though clearly very tired from the battle the day before, they loved nothing better than taking selfies with us, talking to us, and flashing victory signs.  Their morale could not have been higher.  In re-captured villages, they introduced us to not only their Peshmerga commanders, but also the local tribal leaders, and we exchanged email addresses to share photos.  Many of the Peshmerga wore US flags on their uniforms.  And they were keenly aware of, and grateful for, the contribution of US support to their military operations.

We were struck by two issues that require urgent attention:

The first was the ad hoc nature of the Peshmerga forces.  The Peshmerga fighters are fighting for their homes and families, and along with the local knowledge that comes with fighting in your own land, the survival imperative breeds an indomitable fierceness and martial spirit.  But the Peshmerga is not an organized army.  It was clear from our meetings with senior leaders that while there is a core Peshmerga which is organized along conventional military lines, most of the fighters we saw were clearly militia men, volunteers who had recently taken up arms.  There was a mismatch of uniforms, weapons, and ages.  While we at first met the official Peshmerga commanders, wearing Iraqi military uniforms, later the fighters introduced us to their unofficial leaders, wearing traditional Kurdish clothing and sporting antique-looking revolvers with bandoliers of ammunition.  Many of the fighters appeared to have recently returned from overseas, mostly from Scandinavia or the United Kingdom, to defend their homeland.   There was thus an organizational problem that needs to be dealt with urgently.  The Peshmerga in its current battle array is a highly motivated fighting force, but it is comprised of a multitude of different militia and paramilitary groups.  Command and control and communications (C3) are not clearly established.  Indeed during our visit we were caught in the middle of what was almost a gunfight as two groups of Peshmerga jostled and leveled weapons at each other over a jurisdictional matter.  Going forward, the Peshmerga will have to work quickly to establish C3 and military discipline.

The second issue that concerned us was the weaponry available to the Peshmerga.  Despite publicized deliveries of US and Western military materiel, the Peshmerga were lightly armed with Kalashnikovs and a few RPGs.   Armored vehicles, mobile artillery and tanks were all of ex-Soviet origin captured from Saddam.  The main battle tank appeared to be the Soviet T-55, which entered service in 1946. 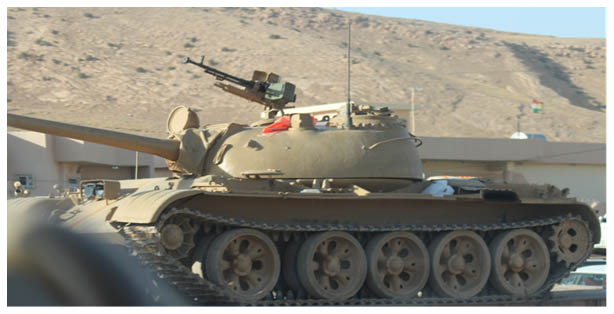 According to our interlocutors in the Kurdish Regional Government (KRG), much of the US and European materiel promised to the KRG has been held at Baghdad International Airport, delayed by the Iraqi Government.  We have no means to verify this.  But even if the equipment were to be delivered, distribution would be complicated by the Peshmerga’s loose command structure.

And yet the KRG, innovative after decades of guerilla warfare, has used what little resources it has to counter the IS threat.  Hence as noted above the Peshmerga has cleverly worked to recapture strategic ground surrounding IS-held territory in order to squeeze IS, rather than launching direct assaults. And it has correctly identified that the strength of the IS army has so far very much been based around its use of pickup vehicles, ‘Technicals’, mounted with heavy machine guns or anti-aircraft guns.  Such vehicles are able to move rapidly across open ground or along metalled roads, quickly delivering fresh fighters and light artillery to the battlefield.  They are in effect something like a cross between the highly effective light cavalry of the American Plains Indians and German WWII Panzers.  Especially in the absence of air assets, they are the most effective fighting force currently in the Mesopotamian region.  Yet such forces are neutered if the open ground that they thrive on is disrupted.  Hence the KRG has surrounded Erbil with labyrinthine networks of berms, trenches and ditches that would force any invading IS forces to channel itself through narrow access points which are controlled by Peshmerga units.  Erbil is now well protected from the type of invasion of convoys of IS Technicals that threated it in July.  Such a tactic provides effective defense against IS convoys, but of course does not protect against terrorism.  Outside the city the same tactic has been employed.  The plains to the north and east of Mosul have been and continue to be cut into defensible parcels by KRG bulldozers. 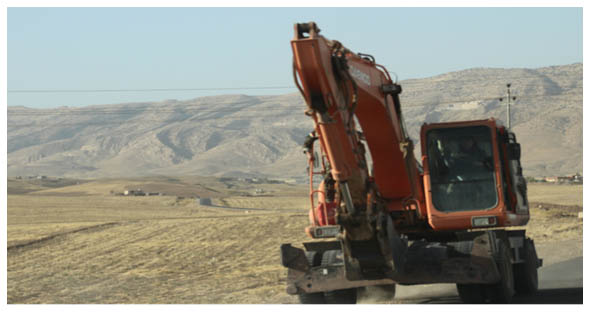 The Peshmerga have a roughly 700-mile front line to defend, and are facing a vicious, well organized and well armed enemy.  US and coalition airstrikes have been highly effective in supporting the Peshmerga’s military offensive against the IS army, but once the initial shock wears off, it is likely that IS will find ways to operate that reduce the effectiveness of airpower and will likely launch counterattacks against Peshmerga ground forces.  We will then face the prospect of guerilla warfare and counterinsurgency from the Mosul region across to Erbil.  Moreover, IS holds extensive stocks of artillery (some, like 155mm howitzers, original provided by the US to the Iraqi Army), and has yet to comprehensively test the effectiveness of indirect fire against Iraqi forces like the Peshmerga or against urban areas.

US airpower, presumably coordinated through the newly stood-up Joint Operations Center in Erbil, has been decisive in protecting Erbil and providing much-needed support to Peshmerga ground operations.

But without extensive support to help the Peshmerga develop effective C3, the US and its coalition allies will find that their ability to employ airpower is not effectively backed up on the ground and will be greatly limited by the need to avoid civilian casualties and friendly fire.

* Dr Schways has now been named as the next Iraqi Minister of Finance, but may be reappointed as Deputy Prime Minister.

The Iraq Advisory Group is an internationally based consultancy group specializing in political, legal and business advisory services in Iraq.

Therese Tayah served in the counterterrorism arena with the Department of Justice in the U.S. and Iraq, and then served as senior advisor to two U.S. ambassadors and one Chargé d'affaires in U.S. Embassy Baghdad, responsible primarily for managing relations with the Iraqi government.  In late 2012 she left government service and is now Managing Director of the Iraq Advisory Group.

Norman Ricklefs has worked with both the Australian and US governments in Iraq, having served as a branch chief in the Combined Intelligence Operations Center in Baghdad, as senior POLAD to the Australian commander Iraq and Afghanistan, as principal advisor to the Secretary General of the Iraqi Ministry of Defense and then as senior advisor to the Iraqi Minister of Interior.  He is President and CEO of the Iraq Advisory Group.

Recent deployments of US advisory elements have emphasized SOF / SF advisors taking the lead in working with Iraqi Security Forces (ISF) and Peshmerga forces. But given the findings of two visitors from the Iraq Advisory Group (IAG), specifically the poor organizational & equipment issues, it seems that deployment of military personnel, preferably higher ranking officers and NCOs, with extensive staff experience that SOF / SF members may not possess, is necessary (I don’t know if this is already occurring).

The IAG visitors noted that most of the Peshmerga elements are loosely organized in militia and paramilitary groups with command, control, & communications (C3) not clearly established. SOF / SF ought to be applied toward the militia elements, taking advantage of their unconventional warfare background, and the loose organization and flexibility of the militia forces while general purpose forces (GPF) US advisors take on the development and refinement of the higher level staff organization needed to better manage, organize, and employ Peshmerga (and other ISF) forces. The GPF advisors would also the preferred ones to develop and improve Peshmerga equipment and logistic issues by focusing on S4 / G4 functions.

I suspect this suggestion might not be well-received by SOF / SF members. But the IAG findings indicate that Peshmerga are not lacking in fighting ability but in what sounds like staff organization and management skills. As several active and retired SF members have told me, “We don’t join SF to be on staff”. Makes sense, and the last I checked, there is no MOS labeled 18S (Staff Specialist). Given this, it makes more sense to use GPF personnel in the staff development role while leaving SOF / SF to work at the more “kinetic” level, running around the battlefield creating chaos with their Peshmerga partners.