Like Vietnam, it is Time to Cut Our Losses in Afghanistan

Like Vietnam, it is Time to Cut Our Losses in Afghanistan 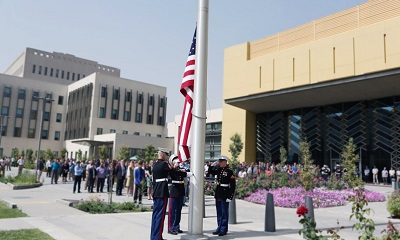 Afghanistan, as another Vietnam, conjures images of defeat as U.S. helicopters take the last American off the embassy roof. While the Vietnam War was a near-term strategic defeat, in retrospect, it may yet prove to have been a geo-strategic win. The same may prove true for Afghanistan after a U.S. withdrawal. Like a bad business investment, there are times when you must accept one’s losses and move on.

Vietnam, after the U.S. withdrawal and fall of Saigon, was a poor yet united country after centuries of domination by the Chinese, Japanese, and French. Like its more powerful northern neighbor, China, it too is a communist dictatorship embracing capitalism.  Despite its similarities with China, China’s rapidly aggressive political-economic-military influence in the Asia-Pacific region is pushing Vietnam closer to the U.S. to counter-balance China. For the U.S., this potential alignment, as seen by the recent U.S. carrier visit to Vietnam, could provide invaluable access for the U.S. and its regional Partners and Allies to hedge against China’s regional hegemonic aspirations.

The strategic defeat in Vietnam allowed the U.S. to refocus its efforts on rebuilding its military capability and capacity to confront the Soviet Union, along with its covert war against the Soviets in Afghanistan, contributed to the Soviet Union’s collapse. While Putin may have viewed this moment as the single-worst strategic event in the 20th century, it propelled the U.S. as the sole-super power and to a hyper-power status. As with any counter-factual theory, had the U.S. remained in Vietnam, it would have been conceivable that the U.S. would not have been able to refocus its efforts on rebuilding its military capability to confront the Soviets and conceivable that the collapse of the Soviet Union would have been delayed or not occurred at all.  As we see today, 18 years of fighting small wars in the Middle East has allowed our strategic competitors (Russia, China, and Iran) the space needed to close their capability gaps.

As for our present-day war in Afghanistan, the longest war in our nation’s history, despite reported gains against the Taliban, they remain far from being defeated. Often, the Taliban have shown their ability to reconstitute and adapt their strategy and tactics to the U.S. and NATO’s military and diplomatic approach.  There are several reasons for this to include the unhelpful sanctuaries that remain in Pakistan and the Afghan Government’s inability to provide effective local governance throughout the country - and its inability to confront the perception among the local populace that Afghan forces, especially the local police, are more corrupt and predatory than the Taliban. That said, many analysts believe the Afghan Central Government would fall without significant Western support.  When I was deployed to Afghanistan, 2012-2013, former International Security Assistance Force Commander, General John Allen, used to compare Afghanistan’s situation to South Korea immediately after the Korean War and that South Korea’s status today as an advanced modern democracy and economy are due to prolonged U.S. support.  However, our long-term commitment was tied to our larger geo-strategic interests during the Cold War and less on the domestic situation in Korea as evident by our support for its military dictatorship until the late 1970s.  Afghanistan is not like Korea and our vital national interest there do not carry the same geo-strategic weight Korea did during the Cold War. It is time we accept that reality that the time to leave Afghanistan is sooner rather than later, and as Senator Rand Paul’s statement during the Pompeo testimony concluded, and declare victory.

Major actors in the region, Russia, China, Iran, India, Saudi Arabia, and Pakistan, all have similar strategic interests in a stable Afghanistan.  Where they differentiate is how each defines a “stable Afghanistan” and the means to achieve that objective.  Too often, people associate Afghanistan as the “Graveyard of Empires.”  This is far from reality as Max Boot and others have noted that Afghanistan was more of a buffer and/or transitory zone between Empires and civilizations. This was true during the heights of the Persian (modern day Iran) and Mughal (modern day India and Pakistan) empires’ competition and later during the “Great Game” between the British and Russian empires.  Occasionally the Afghans would play a role in the region - as when they invaded India during the 1600s and later during the Anglo-Afghan wars ending in 1919.

A U.S. withdrawal from Afghanistan will return it to its traditional position as a buffer/transitory zone between other regional powers.  Like the withdrawal from Vietnam, withdrawing from Afghanistan will allow the U.S. to focus its efforts on its new reality – the return of great power politics against Russia, China, Iran, and North Korea as identified in the latest National Defense Strategy. The U.S. would maintain a minimal presence in Afghanistan and the region to continue counter-terrorism efforts against the persistent threat of violent extremists such as Al Qaeda and the Islamic State. A reduced presence would eventually force Afghanistan to evolve over time, like Vietnam, to become a strategic partner with the U.S. – much like Vietnam emerging as a potential strategic partner in the Asia-Pacific against a rising China and re-surgent Russia. Afghanistan too could eventually play a key role in allowing the U.S. and the West to compete and influence the historic region of the Silk Road that connects the strategic important Eurasian landmass from East to West. Leaving Afghanistan in the end may not be bad, it may be vital to our continued position atop the global order.

The opinions expressed in this article are the author’s and not necessarily those of the U.S. Government or U.S. Department of Defense.

Lt. Col. Chad M. Pillai is a U.S. Army strategist who has completed multiple joint and institutional Army planning assignments. He earned his master's degree from Johns Hopkins University School of Advanced International Studies (SAIS) and will begin his War College fellowship at Queen's University in the fall. The views expressed in the article are his and do not reflect the official position of the U.S. government and the Department of Defense.