This article attempts to produce a framework that can help public health officials and military leaders develop strategies and operations to counter and eradicate Covid-19 type viral pandemics or other future bioweapon threats we might face on the hybrid-warfare battlefield.

Hybrid-warfare is a concept that emerged just after the 2006 Lebanon War as a way to categorize and define unforeseen threats on that battlefield which characterized Hezbollah’s defensive strategy against Israel. There is still a lot of debate about this topic, but we’ll use the definition in Major Brian Fleming’s 2011 SAMS monograph, The Hybrid Threat Concept: Contemporary War, Military Planning and the Advent of Unrestricted Operational Art:

“As the military tried to define the threat in the post-Cold War landscape, numerous ideas emerged to better conceptualize the seemingly growing complexity of threat actors within the environment that did not conform to traditional enemy characterization.  These include the Three Block War, Fourth Generation Warfare, Contemporary Operating Environment, Network-Centric Warfare and most recently revisiting population centric Counter-Insurgency (COIN).  The hybrid threat concept synthesizes relevant aspects of these constructs in conjunction with a pragmatic application of unrestricted operational art.” [1]

Hybrid-warfare strategies allow us to tackle potentially unrelated and different threats in the same environment simultaneously while exercising unrestricted operational art. In hybrid-warfare, the problem sets for friendly forces can be found along a sliding scale of potential conflict environments and threats ranging from conventional to unconventional, as the diagram below illustrates. Each of these threats or conflicts can have their own PMESII characteristics. [2] 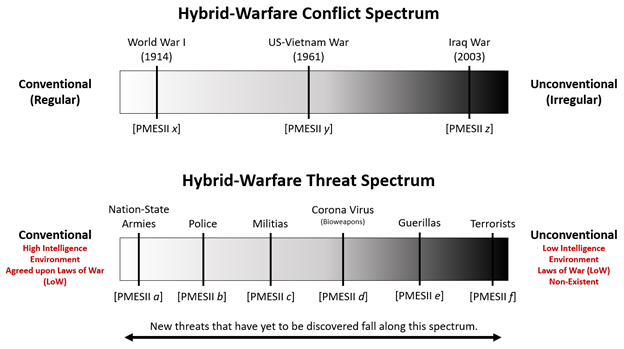 As we are seeing on the modern battlefield, it is incredibly difficult to predict where along the hybrid-warfare threat spectrum new hybrid-threats will appear, so it would be ideal to plan and prepare defeat mechanisms for all of the potential threats that could emerge along that spectrum.  By applying this hybrid-warfare threat defeat mechanism methodology against the Coronavirus, we can tackle the virus using conventional and unconventional defeat mechanism strategies. These unconventional problems might be characterized as something like the burden on our healthcare infrastructure or transportation network disruptions; second and third-order effect issues related to viral infection. This concept helps provide a “benchmark” to begin to classify these conflicts and threats for greater defeat mechanism development. [3]

Defining Coronavirus as a Hybrid-Warfare Threat

By defining the Coronavirus as a hybrid-warfare threat, we can begin to identify the characteristics of how it wages war against us and then we can design defeat mechanisms to neutralize the threat. For instance, Covid-19 acts in very human ways because humans carry and spread the virus. The virus thus follows human movement patterns. This might sound obvious but can provide critical insight into applying non-lethal defeat mechanisms to isolate and quarantine the virus. This would have incredible legal, political, and social implications, but because of length, this article does not address those issues here.

Classifying the virus as a hybrid-warfare threat, we can also use this opportunity to ready our doctrine and forces in response to future bioweapon attacks by potential adversaries. There are rumors this may have been created as some form of a bioweapon, but the settlement of that issue is not relevant to our discussion here. Approaching this issue from a hybrid-warfare threat perspective however, we can more easily define and apply greater complexity to our national strategic response capabilities.

What are Defeat Mechanisms?

Major Douglas DeLancey’s use of the CGSC Student Text Offensive and Defensive Tactics definition for “Defeat Mechanism” is a wonderful starting point:

Major DeLancey further describes Brigadier General (Ret.) Huba Wass de Czege’s types of defeat mechanisms. These are Attrition, Dislocation, and Disintegration. While there are many different defeat mechanism models applied to warfare, we’ll use de Czege’s framework and these three defeat mechanisms to apply Hybrid-Warfare strategies against the Coronavirus. [4]

Applying these Defeat Mechanisms to the Coronavirus and Countering Future Bioweapons

“These defeat mechanisms should be included in doctrinal publications that discuss planning operations. A widely understood, common terminology about how the commander desires to defeat his opponent will help planners select decisive points that achieve the commander’s intent.” [5]

“Attrition as a defeat mechanism means fixing efforts at designated and advantageous locations and time to destroy [the enemy] forces faster than he can recover.” [6]

In order to attrit the virus, self-quarantines over time by the populace can aid in long-term isolation of potential carriers. Self-quarantines are actions citizens can immediately take to minimize spread using social isolation. The sincerity of implementing one’s own self quarantine will decide how much the spread is reduced. By taking proactive measures instead of reactive measures, overwhelming isolation will attrit the virus over time. This defeat mechanism provides long-term attrition of the virus as the probability it spreads from human to human decreases immediately. Digital remote workstations allow employees to work from home and still communicate quickly with other employees. These types of work-around measures will further reduce spread. Self-quarantine measures can be applied at all levels of managerial hierarchies across many industries and sectors. [7]

“Dislocation seeks [to] rapidly [change] the conditions so that the enemy cannot seize the initiative.” [8]

Governments at all levels can take steps to “dislocate” clusters of those infected by proactively instituting shutdowns of public congregating events like schools and recreational public gatherings and changing the conditions so the virus cannot spread. Closing borders, restricting transportation networks, and requiring additional testing all can aid in dislocating the virus from its aggressive interaction among humans. Testing is also an important component in dislocation. By revealing the existence of the virus in as many locations as possible, public health officials can design more efficient plans for medical assistance services and resource allocation. Digitized public network initiatives can help alleviate concerns about government preventing freedom of assembly.

“If well executed, forces can incapacitate enemy organizations and gain control of objectives.   This defeat mechanism relies heavily on the destructive and shock effects of fire, followed closely by ground assaults.” [9]

The work done by previous authors and researchers on hybrid-warfare and defeat mechanisms can provide a framework to build upon for tackling current and future bioweapon attacks as well as any unforeseen hybrid threats/actors on the battlefield. Applying these frameworks gives planners and strategists a starting point in approaching complex hybrid-threats from a proactive perspective. Attrition, Dislocation, and Disintegration are the canvas that the operational artist can use to devise solutions and strategies in creating winning scenarios against the threats that might appear in future engagements. Hopefully by working together and cross-sharing strategies and knowledge, we as a nation and global community can quickly eradicate this threat.

[3] Some people may not like using PMESII as a descriptive planning framework. Any planning organization or person can replace PMESII with their preferred method in describing hybrid-threat characteristics.

Justin Baumann is from the Pacific Northwest where he first became interested in smokejumpers and airborne operations. He has completed graduate degrees from the University of Southern California and Arizona State University in public and business administration. He served with the 1st Battalion, 4th Infantry Regiment (OPFOR) in Afghanistan and the 82nd Airborne Division in Iraq before getting out of the Army.

This tortures analogy beyond…

This tortures analogy beyond the point of usefulness.

1) Unnecessary anthromorphizing obscures the threat.  A virus makes no plans, has no initiative, and controls no objectives. Simply because a virus (or any other disease) is spread in part by human contact does not imbue it with human (or canine, avian, plant, or any other) characteristics or motives, and leads to preconceptions on how it does spread and survive.

2)  Actions against the population don't "defeat" or "attrit" the virus.  They may interrupt transmission vectors, or isolate outbreaks until they burn themselves out, but the virus won't modify its behavior or change its characteristics as a result...in fact, public health planners recommend these actions based on the assumption that the virus won't change.

3) Actions against the virus -- vaccines, destruction of contaminated materials -- are mechanism to destroy the virus, and nothing more.

Likewise, bioweapons, like any other weapon, don't have minds or wills of their own.  Devising strategies limited to defeating weapons cedes initiative to the enemy, and ultimately eradicates nothing.