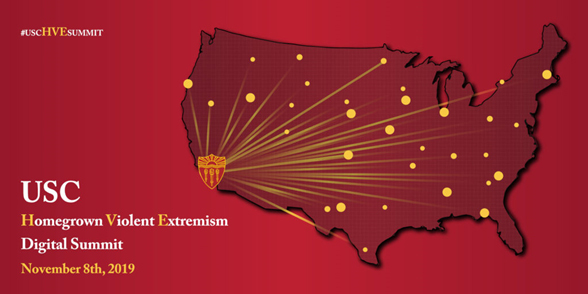 On 8 November 2019, a USC Homegrown Violent Extremism (HVE) Digital Summit was coordinated by the USC Price Safe Communities Institute (SCI). It was held in Los Angeles, California at the main university campus and streamed live to a national and international audience consisting of policymakers, first responders, academics, community organizers and advocates, and other stakeholders within the broader community of interest. Cooperating organizations supporting the summit included One People’s Project, Matthew Shepard Foundation, Anti-Defamation League Center on Extremism, Simon Wiesenthal Center, and Life After Hate. An abstract of the summit’s intent and focus is as follows:

The United States faces an immediate threat from homegrown violent extremism (HVE), and today, that threat increasingly stems from right-wing and white supremacist terrorism. Preventing attacks and enhancing public safety demands better insight into how individuals radicalize to violence, the impact on the victims and the pathway to escape extremism.

With domestic terrorism presenting an ever-growing threat to public safety and security, the summit will bring together experts to explore the challenges in addressing HVE and the methods and tactics that can mitigate terrorist threats. 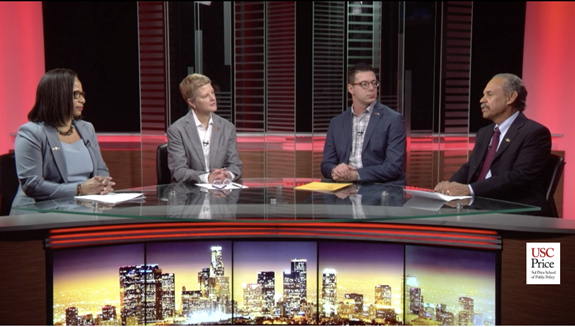 Panel 1—Surviving Extremist Violence: Video Link. Thematic focus: Victims and communities struggle with physical and psychological ramifications after an attack. The panel will feature participants who have survived extremist violence, as well as experts who can shed light on the challenges and needs they face. This panel was moderated by Dr. LaVonna Lewis, Teaching Professor and Director of Diversity and Inclusion Initiatives at the USC Price School of Public Policy. The panelists were Cynthia Deitle, Programs and Operations Director, Matthew Shepard Foundation; Josh Stepakoff, survivor of the 1999 white supremacist attack on the North Valley Jewish Community Center in Los Angeles; and Dr. Tony Beliz, Clinical and Forensic Psychologist. The main panelist themes were:

• Victims of hate crimes cannot be stereotyped or judged as to belonging to one group.  The circumstances surrounding their victimization and hopefully their survival are unique with each individual.  Our society must ensure that these individuals are made aware of the recovery and resiliency services and trauma informed care available to them as they begin to process their new reality that they were targeted for violence simply because of who they are. (Deitle)

• The term “victims” encompass those individuals who feel victimized or targeted although the crime was committed against someone else. Victim service organizations must recognize the wide swath of people that need help including the innocent family members and friends of the perpetrator. (Deitle)

• A key takeaway from our discussion was what can we do as a community to help respond to acts of domestic terrorism? In my opinion, this is a backward way of looking at the issue. We are spending so much time and resources trying to respond to a problem as opposed to being proactive and attempting to prevent it from happening in the first place. (Stepakoff)

• It is important to note that when someone falls victim to homegrown violent extremism, the tragedy is wide-reaching. It affects the individual, their family, the community, first responders, hospital staff, law enforcement and more. One individual's actions will affect many different people and important to ensure that all of those additional individuals have the support they need. (Stepakoff)

• Targeted violence and related trauma can be prevented thru community engagement, education, and stress inoculation training. Community safety is everyone’s responsibility. If you see, hear, or see something contact your local police department or other resources. (Beliz) 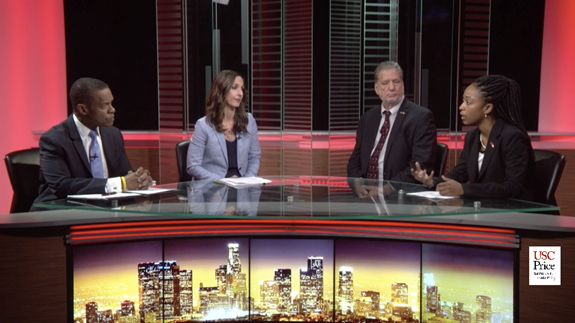 • Today, the internet is the primary method of contact and radicalization for extremists.  Individuals are easily exposed and can be rapidly enmeshed with the online subculture of hate, which uses insider jargon, meme culture and bigoted humor, amongst other elements to weaponize hate and spread fringe beliefs. (Mendelson)

• Promoting a “white genocide grievance,” white supremacist perceive themselves as victims, and therefore justify their unfiltered enthusiasm for violence against anyone they define as “the other.”  Conspiracy theories, propaganda and repetition hammer home these beliefs, that dominate the online space. (Mendelson)

• The major item continues to be the move to new platforms as Twitter, Facebook and YouTube are closed off to extremism. White Nationalists (and ISIS) have been using Telegram extensively as their medium of choice but that may be changing as Telegram has begun a purge in the last week or so. The new replacement may be one called TamTam, a site that looks pretty much like Telegram. Chasing extremists around and finding these new platforms remains one of the highest priorities. (Eaton)

• Other new platforms are iFunny and Parler among others and then there is GAB, essentially an echo chamber for the alt-Right that is a cross between Twitter and Facebook.  A lot of Western individuals and groups are also moving to vk.com, a Russian-based platform that looks like Facebook without as many bells and whistles or much in the way of rules of engagement. Live-streaming continues to be a concern. Other platforms such as Twitch have begun offering live-streaming as well. Twitch's version was used in the Halle Synagogue attack in October. (Eaton) 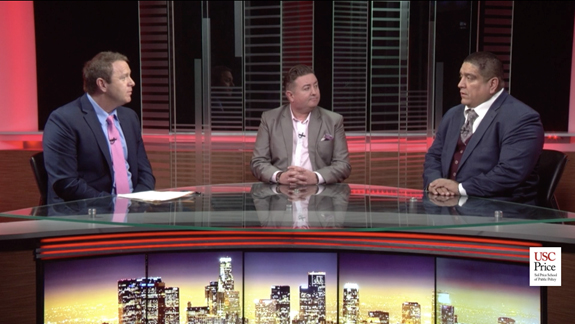 Panel 3—The Path Out of Extremism: Video Link. Thematic focus: As important as preventing terrorist attacks is drawing extremists away from hate and violence. Panelists will discuss the approaches and tools that can encourage adherents to disengage and reject their extremist ideology. This panel was moderated by Dr. Peter Simi, PhD, Associate Professor at Chapman University. The panelists were Tony McAleer, Board Chair and co-founder of Life After Hate; and Sammy Rangel, Executive Director and co-founder of Life After Hate. The main panelist themes were:

• One of the most difficult things to do is to have compassion for someone that has no compassion but aren’t they the ones that need it most? With that in mind, it is very important that we call people out but it is also critically important for a compassionate society to call people in and provide a pathway back to humanity. When we can help people return to the fold and live productive and compassionate lives, society is much better off than if we leave them out in the cold. (McAleer)

• Questions concern the pathway out of extremist groups and whether someone can actually change extremist ideology. This raises concerns about the lack of cultural competency within mental health or law enforcement, as well as the lack of critical mass in the country (or even internationally) to adequately address these concerns effectively through a concerted effort. (Rangel)

• Revelations have been rising around the type or amount of support or the lack thereof for families and significant others and those concerned with   assisting these families living with someone who is involved in an extremist group or espousing extremist ideology. Often times the work is similar to target hardening or assisting the family in insulating and protecting themselves and other vulnerable parties from the type of access potential recruiters within the family could have. Establishing healthy limits and boundaries is often a priority. (Rangel)

The Twitter hastag for the event is #UscHVEsummit, where it  was updated with live social media tweets. An earlier USC HVE Digital Summit was held 14 November 2017. Videos from that earlier summit are posted online. A USC Price report on the 2019 HVE Digital Summit by Matthew Kredell also exists. For additional information on the 2019 HVE summit, contact SCI by email: sci@price.usc.edu or by phone: (213) 740-2928.