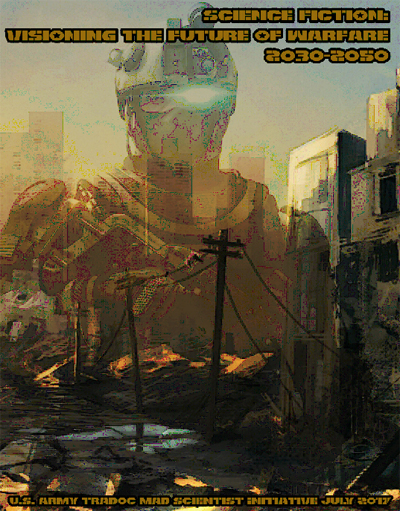 In November 2016, the U.S. Army TRADOC Mad Scientist Initiative launched its first Science Fiction Writing Competition, with the topic “Warfare in 2030 to 2050.”  This contest sought unconventional thinkers and was open to people from all walks of life. One of the founding ideas inspiring the contest was the notion of ‘Science Fiction as reality.’ Science fiction has been historically predictive of future technologies and ideas. One example is the prevalence of mobile “smart devices” and advanced video communications in popular films and television such as Star Trek and Back to the Future. These kind of forward-looking ideas and themes help the Army think about and prepare for future challenges and opportunities in conflict. We sought to challenge writers with the opportunity to contribute ideas outside of what the Army is already considering about the future, and they delivered.

We experienced “catastrophic success” with over 150 submissions from authors in 10 different countries (Singapore, Germany, Finland, UK, Russia, Ukraine, USA, Canada, New Zealand, and Australia). This diversity in authors presented us with a wide variety of thoughts and ideas on the future Operational Environment and warfare. Through the art of storytelling, the Army was able to visualize the known, probable, and possible challenges and opportunities that the future holds.

The stories allowed the readers to place themselves in a world where familiar met unfamiliar. This world featured a myriad of future technologies forcing paradigm shifts away from current, conventional thinking. The future world was hyper connected, extremely dynamic, and at times uncertain. Writings portrayed an environment in which humans, and especially Soldiers, were confronted with complex, rapidly-changing situations outside of the known operational environment of today. Despite the variety of the imaginative worlds presented, there were a multitude of technologies and themes that were prevalent. These commonly recurring themes and technologies provided valuable insight into warfare in 2030 to 2050.

Drones: The most commonly featured, spanned across all physical domains: Land, Air, Sea, and even Space. Sizes ranged from micro to the size of conventional aircraft and ships. Drones in the stories were smart, self-healing, self-learning, cognitively connected to users, and used in swarming across all domains, often autonomously.

Human enhancement:  Human performance enhancement and augmentation in many of the stories ranged from known technology such as pill-form stimulants/enhancers to permanent implants and genetic modifications.

Advanced Artificial Intelligence (AI): More advanced and robust than today- self learning, autonomous, and trusted by humans; sometime even sentient. AI was available at the edge of the battlefield to automate a multitude of processes, improve situational understanding, control weaponry and C2 functions, and aid in decision-making.

Through the depiction of the aforementioned technologies and the portrayal of future environments, multiple prominent themes emerged in the Sci-Fi corpus.

Virtually every new technology is connected and intersecting to other new technologies and advances. Convergence frequently occurred across numerous technologies. Advances in materials, AI, drones, communications, and human enhancement amplified and drove one another across multiple domains. A major cultural divide and gulf in understanding still existed between different populations even with developments in technology (including real-time language translators). While increasingly integrated and advanced systems improved upon each other, the inherent connectivity and complexity that resulted presented a number of challenges and opportunities for future forces and populations. The fully enmeshed communications and sensing residing in future systems made the hiders vs. finders competition ever more important in future conflict settings. Additionally, the constant battle for and over information often meant victory or failure for each side. Due to the snowballing speed of interaction on the battlefield (during and in between high-intensity conflict), a number of the military units in the stories required smaller units, with large effects capabilities and more authority, and operated under flat and dispersed command and control structures.

The linked compendium of some of our top science fiction stories gives an enlightening window into the future operational environment and the future of warfare. As one reads this collection of stories, they can almost imagine the look, feel, and sense of what “Warfare in 2030-2050” will be.