0430 on the morning of 6 June 1944 was dark, with scudding clouds, stiff winds, misting rain, and choppy seas. Offshore, less than three miles out from the identified five Normandy beaches, more than 4,500 ships began to deposit their charges on small, plywood landing craft named Higgins boats. 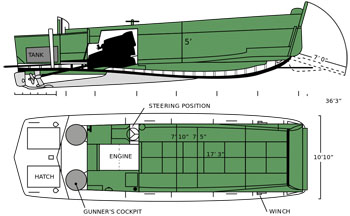 The boats had just been dropped overboard from the thousands of larger ships now occupying the Bay of Biscay as far as the eye and radar could see.  The small craft, bobbing and pitching in the rough sea, attempted to align themselves with the larger ship hulls, attached only by a wide rope net ladder.  Down the ladders clambered the heavily burdened troops that would open the Continent. Each would have to wait at the bottom and time his descent into the craft perfectly to avoid a broken leg, crushed pelvis, or drowning between the craft and the ship. This was not a fun morning, but the enormity of the moment was recognized by all participants.  Wait.  Wait.  GO.  Slam.  Knees hitting the deck.  Recover.  Move back. Don’t get in the way.  Pack it in.  Jam it up. Repeat.

These individual boarding events were repeated approximately 140,000 times. The assault troops came from a myriad of Allied nations, but were predominately US, Canadian and British.  No craft carried more than 35 or less than 25, extraordinarily, heavily laden soldiers.  100% of these craft on which rode the hopes of the Allied nations, were built in the immediate environs of New Orleans, Louisiana, though they carried the entire tapestry of our Nation, as well as the only hope of deliverance for an enslaved Europe. 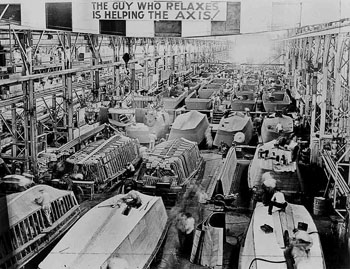 These plywood and paint craft would carry the Allied nation’s hopes and means of liberation to France and the ultimate destruction of the German Army and the achievement of General Eisenhower’s charge by the Combined Joint Chiefs of Staff.  At this moment, an alcoholic Irishman named Andrew Jackson Higgins won the war.

It was not easy to reach this point.  Higgins was ill-appreciated by the Navy Bureau of Ships which suffered from a heavy dose of Not-Invented-Here.  He further compounded the difficulty with his bombastic take-no-prisoners approach to selling his design.  But, he sold the concept to the only person that mattered in 1942, the President of the United States.  From that meeting, all else flowed. 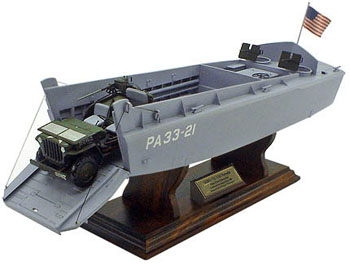 Throughout the 1920s and 30s, Higgins had eked out a living supplying the developing oil and gas wells in the Gulf of Mexico and the bayous of the Louisiana coast.  To service these sites, he had designed and built several shallow draft craft capable of carrying significant loads with less than two feet of water under the deck.  They were flat bottomed with a front drop ramp and a powerful engine that could ram through shore trash, as well as, reverse off of sand bars and mud flats.

Higgins foresaw and prepared for the coming war better than most.  As a mark of his prescience, he bought the entire 1939 production of Philippine mahogany and stored it at personal expense, at his boatyard. He knew it would be desperately needed soon, and it was.  One of his first wartime contracts was to build PT boats, all of which required mahogany as the primary deck material.

At the beginning of the war, Higgins had submitted his designs to the Navy for an assault craft and had been studiously ignored.  The Bureau of Design awarded contracts to its traditional family of big ship builders who produced both inappropriate and incompetent craft as the Marines in the Pacific soon learned. Traditional “V” shaped hulls quickly bottomed out on reefs, forcing the Marines to disembark much further from the beach than desirable. 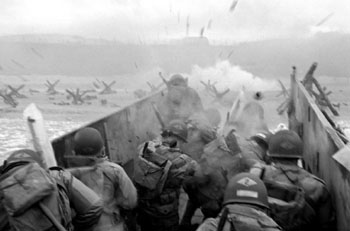 Higgins, not easily frustrated, stormed the Hill and in time, gained an audience with the President.  He had done his homework and had previously built and demonstrated for the Marines, several variations of the Higgins Boat (Landing Craft, Assault), which the Commandant endorsed in a glowing letter.  This letter, read by FDR in Higgins’ presence, caused FDR to direct that the Navy contract Higgins for an initial issue with follow-on construction to be determined.

The first major test occurred at Guadalcanal where the craft was demonstrably superior to all other craft in getting men and material ashore.  With a strong letter from Archer Vandergrift, Commanding General at Guadalcanal, and endorsed by Admiral Chester Nimitz, Commander in Chief, Central Pacific and US Navy, Pacific, Higgins received a huge addition to his initial contract.

Higgins had an unusual perspective as well as a social sensibility for the time with his organization.  He vastly expanded his small boutique boat building firm into a diverse colossus Henry Ford would have appreciated.  But unlike Henry, he demanded and got certain social changes to local society that only money and influence can bring. Specifically:

All assembly work lanes were fully integrated.  Segregation did not exist within the Higgins factory though it was a firm social and legal custom throughout the South.

Wages were well above national average, encouraging quality personnel to migrate to the facility.

Women and men were paid equally for equal work. The only promotion criterion was quality of performance.

As housing was a major issue in all war-expanded locales, Higgins built dormitories and mess halls for employees, as well as, nurseries for children of workers. Everything was fully integrated.  Complainants could comply or seek employment elsewhere.

Medical clinics were staffed with quality doctors and nurses and were also fully integrated.  His stated point was that less hospital time meant more factory time.

Within 18 months, Higgins built eight assembly facilities throughout the Delta area--each directly accessible to deep water--so the burgeoning amphibious navy could take their newly built craft directly on board before deploying.  For others, he built railroad spurs that carried the products to both coasts for further shipment to the respective war zones.

Running out of bay space, Higgins began to exploit the deeper bayous in the interior.  He found areas where there was sufficient land to extend a rail spur adjacent to a bayou that let into the bay.  Here he would create a new assembly line, with one spur bringing in parts and material at one moment and hauling off finished product the next. 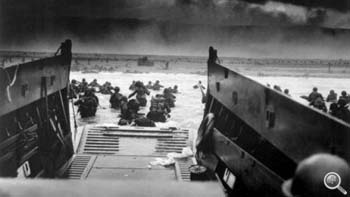 By late 1943, the Higgins boat in its many forms, became the mainstay of all amphibious assault and sustainment efforts in all Theatres-Atlantic, Pacific, Mediterranean, and Indian Ocean.  The very simplicity of the craft lent itself to countless local modifications ranging from armor plating to on-board cranes to deck augmentations.  But always, the craft retained the basic design Higgins had offered to the Navy in 1942.  The craft had simply become the primary tool to get Allies ashore, regardless of location. There would be no amphibious assault without Mr. Higgins’ boats—a point clearly stated by General Eisenhower after the war.

There was only one piece of significant steel on the craft--that was the ramp.  It was about a foot higher than the gunnels with a slotted top to permit viewing by the occupants.  The ramp itself was ribbed for traction to assist either foot or vehicle traffic.  It was also thick enough to stop small arms—a decidedly valuable asset on D Day, Normandy.

From 0430 until 0530 on D day morning, the craft circled in the water, well offshore, while the entire force was assembled for the first three waves—almost exclusively borne by Higgins boats.  Later, in the subsequent waves, the more specialized landing craft would be introduced to shove ashore the mass of material and firepower that would assure success.  But first, the infantry, ungodly seasick, soaked and scared, would be put ashore at Sword, Gold, Juno, Omaha, and Utah to secure the beaches—most all carried in Mr. Higgins simple wooden boats.

Beginning at 0530, the crafts emerged in three waves through the growing light toward the obscure, almost indiscernible landlines of Normandy.  They passed by the bombardment line and were literally sucked out of the water by the concussive waves of large caliber gunfire from more than 12 battleships, 23 cruisers and 80 destroyers firing overhead.  No soldier aboard a craft that morning ever forgot the combined effect of the vacuum created by the rounds passing overhead, as well as, the all enshrouding nitrous exhaust clouds sweeping over.  The very closeness of the sea, the sky, and the sounds provided an odd sense of confidence to the huddled, physically weakened charges in Mr. Higgins’ boats. 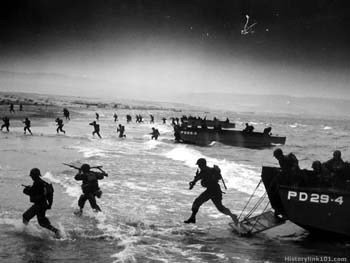 By 0600, the craft began to take on some sense of individuality.  German mortars and artillery began to impact, sending up gouts of water over the sides.  In some cases, there were direct impacts on sister craft with highly visible effect.  The craft ploughed onward toward the increasingly discernible and tortured coastline.

Now, small arms began to clearly impact.  Soldiers crouched beneath the gunnels begging the steel ramp to absorb the incoming greetings.  With the greatest of personal self-discipline, they continued to bail with their helmets to supplant the grossly overworked bilges.

Should a too curious soldier or an eager helmsman extend himself beyond the protection of the ramp or gun tub, he paid an immediate price.  A point not unnoticed by the packed troops about to lose all protection the ramp offered.

0632 at Omaha saw the culmination of Mr. Higgins’ design and force of personality.  Ramps dropped and began to deposit the 140,000 soldiers throughout the invasion area that would pay the price for success--most brought ashore in a packet of 25 to 35 soldiers in a simple wood boat the Navy had previously rejected.

The ramp was steel and flat, but on that morning, in that instance, it was formed into the sharpest of bayonet points American industry and the mind of one man with an unusual vision of what made America, could create.  It could truly be said that Mr. Higgins carried the war and most everyone in it.

Your article is quite…