“Everything flows, nothing stays still.” Heraclitus

Last year, when the CJCS issued his memorandum on ‘Desired Leader Attributes for Joint Force 2020’ I bet many of you read ‘recognize change and manage transitions’ and thought, ‘That’s easy. I do that already.’ If so, then let me humbly suggest to you that you do not understand the towering complexities associated with change.

So, what is change? Merriam-Webster’s Dictionary defines change as ‘to make different,’ ‘to replace with another,’ and ‘to undergo modification.’ Current thinking influencing changes in JPME curriculum, such as JCOA’s ‘Decade of War, Volume 1’ are not helpful in that they do not provide us with a definition of change; rather they emphasize the poor handling of strategic and operational transitions between phases. One cannot, however, plan, recognize, and manage transitions without first understanding how and why change occurs. What makes change so complex for the Joint Force is the interconnectedness of the international security system, the dynamicity of system variables, and the uncertainty associated with even minor modifications to individual variables.

Change can occur in any of the traditional systems military leaders are familiar with: political, military, economic, social, information, and infrastructure. For illustration purposes, however, let’s look at just one of the drivers of change: social change. Social change refers to whatever happens over time to the roles, institutions, and the order comprising the social structure. Thus, social change significantly alters social structures, to include the development and consequences of these structures resident in accepted values and norms.

What is important for the Joint force to understand is that social structures are not the stable, highly integrated, and harmonious systems as presented on a map. Rather, social structures are unstable, loose, constantly undermined by internal tension and bombarded daily by external influences. Failure to understand this societal attribute is to miss the primary fact about societies and, as a result, misunderstand how change may affect societies.

Joint leaders must keep in mind that the world is in constant and continual motion with any number of sources of change, such as ideology, technology, and competition, affecting individuals, organizations, and societies in different ways. The effects of change can occur suddenly, such as through a revolution, or subtly through evolution or diffusion. All change has associated costs—economic, social, psychological, or otherwise—and affects differing levels of society unequally. Reaction to change occurs in myriad ways ranging from outright rejection to total embracement. How change occurs, the rate at which it occurs, the duration of the change, the strategies for implementing or resisting change, and why change affects societies in certain ways are contained in social change theories.

What does this mean for Joint leaders? It means they must understand the dominant social change theory or theories that represent one’s worldview or ‘weltanschauung’ upon which critical assumptions about human nature as well as the nature of societies rests. Typically, these assumptions are accepted implicitly, usually without thinking about them. Since one tends to use the same assumptions in almost all cases, there is a tendency to explain change using the same theories in those cases as well. If one accepts a certain assumption, one gets a certain theory; if one accepts its opposite assumption, a different theory is accepted. Worldviews and the associated social change theory not only form the basis for understanding human nature, but shape the approach taken to influence the future.

For example, most Westerners, in general, tend to think of the world in black or white, and try to shield profound truths in insulated compartments. Americans, in particular, are not conditioned to hold profound truths in paradoxical tension, even when there is evidence and pressure to do so. This inability, or unwillingness, to hold multiple truths in tension results in leaders operating in a social vacuum. As a result, they develop causal models and courses of action without any countervailing forces to inform or modify development. The 2010 NSS illustrates how social change theory can affect the development of a strategy, and how the inclusion of different theories may provide for a richer and fuller understanding, and thus a more comprehensive, model.

In their book, ‘Social Change. In Teaching About the Future,” Peter Bishop and Andy Hines describe Progress Theory as the dominant theory of social change in Western culture. While most Westerners respect other cultures, they believe modern Western culture is the social pinnacle. Critical assumptions are that there is a universal standard for judging and that general social improvement occurs over long periods of time. The NSS reflects this theory in that it states that there are universal rights and that the U.S. will act on “behalf of a world in which individuals enjoy more freedom and opportunity, and nations have incentives to act responsibly, while facing consequences when they do not.” The criterion for judging responsible actions are those values prominent in American society today: security, liberty, justice, material comfort, among others. In this type of approach, American leadership would focus on the development of other societies along the lines of the United States (Figure 1) rather than change valued by the local culture.

A different theory of social change, such as modern Conflict Theory, would result in an approach that assumes that society is not a unitary entity, but a collection of different groups in conflict with one another, each working to achieve their own objectives according to their own agenda. In this theory, conflict is assumed to be the result of unequal distribution of power and resources in society. Thus, society is defined by the natural inequality that produces conflict rather than that which produces order and consensus. Political and military leaders have used this process by pointing to real or exaggerated threats from outside the group to scare people into supporting them. This type of approach would focus American leadership on forcing change on other societies through military action (Figure 1). 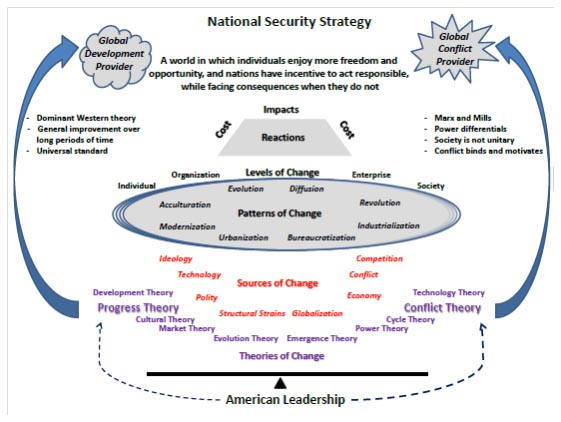 Depending upon one’s perspective, a strategy based upon a certain set of assumptions may, in fact, be viewed by another as assumptions for another theory. Thus, the tension that Joint force leaders must understand and manage is that both perspectives may be correct. This is a complicated task and not one that can be easily foisted upon individual members to develop on their own. Rather, the Joint military education and training enterprise must facilitate Joint leader development by integrating the following educational competencies into all levels of professional military education:

A changing strategic security environment is redefining the knowledge, skills, attributes, and behaviors demanded of leaders for Joint Force 2020. One of the six desired leader attributes requires Joint leaders to recognize change and lead transitions to change. To develop this skill, Joint leaders must apply an understanding of change as it relates to the international security system, with social change theory being but one driver.

If you thought understanding change was going to be easy, then you need to rethink your position. Understanding the complexities associated with change is not something that can be done in a crisis or in an ad hoc manner. It will take time, it will require individual and institutional effort, and, most importantly, it will demand senior leader involvement.