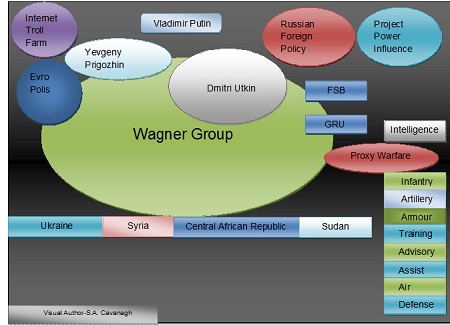 Where Has Wagner Operated?

What Does Wagner Do?

What are Wagner Tactical Capabilities?

What Russian Intelligence Agencies are Associated with Wagner?

Wagner is believed to be under the control of:

Who are Wagner Contractors?

How Many Contract Soldiers are There in Wagner?

How Many Wagner Soldiers Have Been Killed?

What Objectives Does Wagner Front on Behalf of Russia?

Who are the Big Players in Wagner?

Why Does Wagner Matter?

Wagner can control information. Wagner is part of a broader Russian strategy for information control and operational security. Russian military activity is easier to hide with PMCs compared to regular Russian forces. A Wagner employee signs a 10 year non disclosure agreement and surrenders personal cell phones and other tech devices when operational; this significantly reduces information leaks.  Family members are similarly bound by non disclosure, in order to receive life insurance payments if the soldier is killed during operations. These factors help Wagner hide information about operations.

Wagner helps deny Russia’s military capabilities to the outside world. Secrecy is maintained as many fighters in the group do not even know the first names, let alone the surnames of their platoon comrades. “Curiosity is not welcomed.” (The Interpreter, 2016)

When contractors get killed abroad in combat actions it draws little attention. The general public is less sympathetic to the death of a soldier that fights as a mercenary for a pay check.  Regular Russian soldiers killed in foreign countries draw attention to operations the government does not care for the public to know about.  This places Wagner contractors at significant risk.  Contractors are somewhat anonymous and can be used for more hazardous missions.

According to Mark Galeotti, senior researcher at the Institute of International Relations in Prague,

“The Russian people are not very enthused by the idea of an empire that would involve their boys coming home in body bags. There’s clearly a lack enthusiasm for this conflict.” “By having this military company Wagner, they can have a force they can actually deploy ... but when people die, it doesn’t have to be announced.” (news.com.au, 2017)

There are no official links between Wagner and the Russian government making operations easily disguised.  (Jojart & Racz, 2017) (Newsweek, 2018)

Russia is emerging with an assertive foreign policy strategy.  Russia is deploying contractors to areas of former soviet influence and is looking to exploit new economic opportunities that present elsewhere.  Wagner is able to secure failing regimes like Syria’s Assad government, in return for lucrative economic partnerships.  Examples include; 25% of production profits for oil-gas fields secured by Wagner & Evro Polis in Syria, and mining and atomic energy opportunities in CAR and Sudan in exchange for military training and advisory assistance. Wagner provides added value to Russian ideology through proxy warfare as a geopolitical tool. A PMC that generates income and achieves Russian agenda will continue as an instrument of tactical & strategic policy.

Wagner Group PMC is an effective mechanism of Russian foreign policy, achieving geopolitical strategy through proxy warfare and military influence.  Wagner capabilities are extensive and include; infantry, artillery, air defense, armoured tanks, training advisory-assist and intelligence.  Wagner utility has been demonstrated by operations in Ukraine, Syria, Central Africa Republic and Sudan.  Wagner is unofficial. Having no formal links to the Russian government, it is able to operate free of oversight.  Operations are veiled in secrecy because contractors are bound by non-disclosure agreements.  Wagner an extension of Russian government foreign policy is an effective business model, able to supplement itself in Syria by securing oilfields for profit.  It is certain Wagner will continue to be a powerful element of Russian foreign policy in the future.

Hume, T. (2018, February, 14) Nobody Wants to Talk About the Russians Killed in US Airstrikes. Vice News.  Retrieved from https://news.vice.com/en_us/article/evmpnk/russians-killed-syria-us-airstrikes

Kramer, A. (2017, July 5) Russia Deploys a Potent Weapon in Syria: The Profit Motive. The New York Times.  Retrieved from https://www.nytimes.com/2017/07/05/world/middleeast/russia-syria-oil-isis.html

Baronin, A. (2017, December 27) Prospects and forecast for military strengthening of Russia’s position in Sudan.  Retrieved from https://informnapalm.org/en/prospects-and-forecast-for-military-strengthening-of-russia-s-position-in-sudan/

Rueter, C. (2018, March 2) The Truth about the Russian Deaths in Syria. Spiegal Online. Retrieved from http://www.spiegel.de/international/world/american-fury-the-truth-about-the-russian-deaths-in-syria-a-1196074.html

No chances of Russian military base in Sudan. (2017, January 2015) Warsaw Institute. Retrieved from https://warsawinstitute.org/no-chances-russian-military-base-sudan/

Jojart, K., Racz, A. (2017, May 10) Contemporary Russian Military Thinking on Conflicts in the 21st Century: Beyond the Gerasimov Doctrine. Paper presented at Conflicts in the Gray Zone: A Challenge to adopt, Budapest, Hungary. Abstract Retrieved from http://hvktkh.hm.gov.hu/kiadvanyok/dokumentumok/grayzoneconfer.pdf#page=110