China’s Aggressive Move to Occupy the Spratly regional waters through Reclamation has proved an effective stratagem, for projection of political, economic and military power.  The Hague has ruled China has no traditional claims to the disputed region and the Spratlys are “rocks not islands.” China continues to reclaim and militarize several strategic islands (reefs) and occupies them. The United States, French and British navies exercise freedom of navigation near the new islands, as China warns it will use military force to defend new territorial claims. China has tactically and strategically extended its military “range and influence” with navel bases, airstrips, radar, communications, missile installations and shelters. China has bet on reclamation and occupation and won. 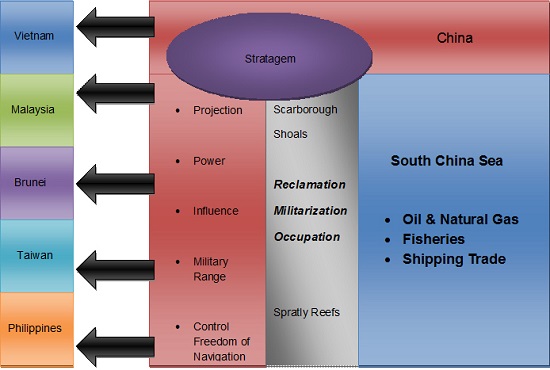 Why is China Building Artificial Islands in the Spratly Region?

China believes it has legitimate claim over the disputed waters because it was the first to discover them.

China declares it was the earliest to explore, name, develop and administer various islands in the South China Seas. (CNN, 2016)

The South China Seas are strategically important, 30% of the worlds shipping trade filter through the region and there are 5 other countries (Taiwan, Malaysia, Vietnam, Philippines & Brunei) that have claims to the area. (Vox, 2017)

The South China Sea is rich in natural resources.  There are an estimated 11 billion barrels of oil, 109 trillion cubic feet of natural gas and 10% of the world’s fisheries. (Vox, 2017)

Taiwan first occupied an island in the Spratlys after World War II, and the Philippines, Vietnam and Malaysia followed suit, and all have built outposts and airstrips on their claimed territory. (CNN, 2016)

China has denied it would militarize the islands it has built, claiming use is for; navigational aids and weather stations.  China has since turned the islands into navel and air force bases with hardened infrastructure.

China has looked at the farthest ranges of aircraft and communications equipment.  From a strategic standpoint this allows China to reach beyond those limits and extend the range of their power and influence.  In 2012, China claimed Scarborough shoal, located in the north of the South China Sea. If China manages to turn Scarborough shoal into a militarized island, it will assert influence over the entire South China Sea. (newsweek.com, 2017)

According to assistant professor, Richard Haydarian of De La Salle University in Manila; China is aiming to expand its military footprint which creates irreversible facts on the ground placing China in a position to use military force to defend its new territorial claims. Essentially China is telling everybody it is here to stay and not leaving.  (SCMP.com, 2018)

Environmental Impact of Chinas Man Made Islands in Spratly Waters

Construction of the islands has required massive dredging operations.  According to The Hague in 2016 China has caused irreparable harm to marine environments through the destruction of coral reefs which is against international law.  (newsweek.com, 2017)

Can China Build Legal Islands in the Spratly Waters?

China a member of ASEAN, agreed not to develop any of the reefs or island in the Spratly region of the South China Sea. Further China agreed to talks to negotiate who has rights over the disputed waters and islands. (news.com.au, 2018)

The Hague has rejected Chinas claims to the South China Sea, and refute the seas are part of Chinas historic fishing waters.  The Hague also says that the Spratly Islands are “rocks and not islands” and there fore no country has jurisdiction. (newsweek.com, 2017)

Freedom of Navigation Operations-Countering China in the South China Sea

The US Navy conducted freedom of navigation operations within 12 nautical miles of Mischief reef on two occasions in early 2018, to the dismay of China.

The US conducts routine and regular freedom of navigation operations in the past; it will continue to do so in the future according to a spokesperson for the US Navy Pacific Fleet. (Reuters, 2018)

China feels that the US is escalating tensions in the region unnecessarily.  The US is concerned China is restricting free nautical movement. US Navel forces patrolling these waters have been warned that China will protect its sovereign claims to the waters. (Reuters, 2018)

China has hardened its stance on territorial claims to the South China Sea.  Chinas investment in reclamation of islands has given it leverage through presence and military occupation.  Legitimate or not, China is now established in the region, allowing effective projection of influence, power and military range.  Chinas stratagem for control of the South China Sea through reclamation and occupation has proved remarkably effective.

Ross, E. (2017, March 29) How and Why China is Building Island in the South China Sea. Newsweek. Retrieved from http://www.newsweek.com/china-south-china-sea-islands-build-military-territory-expand-575161