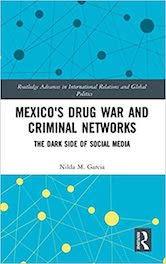 In a blurb written for Nilda M. Garcia’s book entitled Mexico’s Drug War and Criminal Networks, I stated that this work is “the first systematic attempt to study the ‘dark side of social media’ focused on the [so-called] Mexican cartels.  Through a keen and methodologically rigorous analysis, [the author] shows how three Mexican transnational criminal organizations—the Sinaloa Cartel, Los Zetas and the Knights Templar—interact in the cyberspace, organize among themselves, and which strategies they use to conquer and survive during a seemingly endless drug war.”

The research focus of the work attempts to explain the Mexican cartels’ capacity for survival and explores the role that social media has played in Mexico’s war on drugs. In her newest book, Nilda Garcia—a visiting assistant professor at the Political Science Department at Texas A & M International University—makes use of social network analysis to assess the role of drug cartels in cyberspace in the context of their violent conflict with the Mexican state.  Specifically, this methodology is utilized to identify and visualize social relationships, groups and their dynamics, as well as the agents involved in this contemporary armed conflict in the virtual world.  Prior to this work, most of the studies that focused on the utilization of social media by criminal agents were mainly centered on terrorist organizations like ISIS and online jihadist activities.  In fact, before this research, the use of social media by the Mexican drug cartels had been generally overlooked by scholars, and remained limited to journalistic accounts or a few specialized reports.[1]

It is quite difficult to perform this type of research because the key actors, groups and networks involved in these dynamics operate essentially under conditions of anonymity.  At the same time, they perform illicit activities that are not frequently displayed in  cyberspace, nor thoroughly explained by experts, communicators or law enforcement agents. Nilda M. Garcia’s attempt to analyze the role of criminal networks in cyberspace is outstanding for these same reasons, and for all the work it involved in terms of social media content curation and interpretation.  It takes time and substantial effort to know who is who in these types of illicit networks, the criminal world and clandestine activities.

Nilda M. Garcia analyzes three relevant cases—the Sinaloa cartel, the Zetas, and the Knights Templar (Caballeros Templarios)—and their interactions, mainly in the electronic platforms of Twitter, Facebook, and YouTube. Her findings suggests that, if used efficiently, social media is a tool that can benefit and strengthen Mexican drug cartels in Mexico, by enhancing both their organizational and operational capabilities. Garcia argues that when used effectively—and coupled with the adoption of decentralized structures—these platforms do increase the cartel’s survival capacity. She also finds that social media strengthens criminal organizations, essentially by enhancing their legitimacy and the possibility of attracting new recruits.

The study contends that in two of the cases, the Zetas and the Sinaloa cartel, the configuration of their virtual network is similar to their physical structure.  The author also suggests that early detection of emerging cells within the structures of the criminal organizations is possible.  Overall, this study seems to reveal, to some extent, the cartels’ strategies or tactics, demographics, and information about real-time operations.  Overall, applying social network analysis to the study of drug cartels as a tool to investigate the nature of the ‘new networked generation’ of criminal organizations is very relevant, but remains highly understudied.

Nilda Garcia’s work is outstanding and involves significant effort, a clear understanding of social media dynamics, and technical capabilities.  The methodology is quite original and appropriate. However, much more work needs to be done in this area.  My own research regarding this subject shows that it is not easy to distinguish cartels from other actors who participate anonymously in social media and have divergent agendas—such as civilians (including journalists) and government officials (law enforcement agents, in particular).  It would be interesting to analyze very carefully the so-called phenomenon of ‘cyberparamilitarism,’ which is the informal (or non-institutional) utilization of social media by law enforcement agencies—from Mexico, the United States and maybe other countries—and their participation in the drug war, pretending to be civilians or citizen journalists.  The real intention of these actors seems to be to gather intelligence or even to perform counterinsurgency operations in cyberspace.[2]  It is not uncommon to detect plausible attempts to spread out propaganda or perform psychological operations through social media platforms in the context of Mexico’s so-called war on drugs.

Finally, it is important to recognize that often cartels do not operate independently from state actors.  In other words, it is frequently the case that government authorities protect or collaborate with drug cartels at different levels. It is sometimes difficult to separate criminals from law enforcement agents, that is, bandits/cartels from police/military.  Identifying and unravelling the participation of civilians, cartel members, and government officials in Mexico’s drug war in cyberspace is quite complicated due to the nature of these electronic platforms and the anonymity they allow.  Criminal networks in the cyberspace do not only involve Mexican cartels, but also sometimes government officials. The participation of law enforcement agencies, along with other government actors and civilians in social media platforms, seems to have, at times, a dark side as well.

Dr. Guadalupe Correa-Cabrera is Professor at the Schar School of Policy and Government, George Mason University.  She holds a PhD in Political Science from The New School for Social Research.  Her areas of expertise are Mexico-U.S. relations, organized crime, immigration, border security, social movements and human trafficking. Her newest book is Los Zetas Inc.: Criminal Corporations, Energy, and Civil War in Mexico (University of Texas Press, 2017; Spanish version: Planeta, 2018).  She is co-editor (with Victor Konrad) of North American Borders in Comparative Perspective: Re-Bordering Canada, The United States of America and Mexico in the 21st Century (University of Arizona Press, 2020) and co-author with Dr. Tony Payan of Las Cinco Vidas de Genaro García Luna (El Colegio de México, 2020) and La Guerra Improvisada: Los Años de Calderón y sus Consecuencias (Editorial Océano, 2021).   Professor Correa-Cabrera was recently the Principal Investigator of a research grant to study organized crime and trafficking in persons in Central America and along Mexico’s eastern migration routes, supported by the Department of State’s Office to Monitor and Combat Trafficking in Persons.  Guadalupe is Past President of the Association for Borderlands Studies (ABS). She is Global Fellow at the Woodrow Wilson International Center for Scholars. She is also co-editor of the International Studies Perspectives journal. She is a Small Wars Journal-El Centro Fellow.