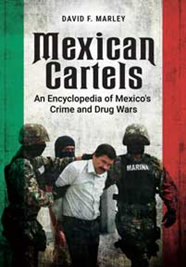 The specialized encyclopedia on the Mexican cartels written by David F. Marley is described by the publisher thus: “This comprehensive reference work offers a detailed exploration of the vicious drug organizations that have enveloped Mexico in extreme violence since the 1980s.” The work holds much promise given the author’s background and expertise. He has an amazing pedigree holding multiple graduate degrees, possessing bilingual (English and Spanish) research skills, engaging in three decades of university level teaching and research in Mexico City, and publishing tangentially related book length works—Wars of the Americas (ABC CLIO 2008) and Mexico at War (ABC CLIO 2014). Still, while Marley possesses subject mastery on general and related themes—including piracy—he is not a cartel expert.

The structure of the work is as follows. The encyclopedia contains a list of entries, introduction, A-Z entries, chronology, glossary, general works, and an index. While 78 entries are listed inside the book, the back cover states “more than 200 entries” are featured within it. This large discrepancy may be partially accounted for by the many subcomponent essays contained within the larger entries but still represents a bit of a promised content anomaly. The introduction provides a basic overview related to the Mexican cartels and the Mexican police, army, and navy. The chronology section spans January 16, 1977 (relating to the start of Operation “Condor”) through February 12, 2019 (“El Chapo” Guzmán found guilty on all accounts in a New York jury trial). The glossary contains 42 Spanish terms related to the narco wars, ranging from standard ones (such as sicario; cartel gunmen or assassin) to more esoteric words (such as Nectar Lima that refers to the nickname of Nuevo Laredo cartel gunmen and likely derived from their radio call initials “N.L.”). The general works section contains a short-listing of general books and articles related to the topical area while the follow-on index section is relatively well developed.

Each individual essay is composed of a title, short descriptive sentence, the main body of the essay with or without sectional subheadings (dependent on its length), a see also listing, and further reading. Great variability exists in the length of these essays from a few hundred into thousands of words. The essays are all text based with no photos, tables, or figures of any type, nor are hyperlinks or urls utilized, giving the work a very traditionalist encyclopedia character. Many of the further readings reference Small Wars Journal and Borderland Beat articles and notes as well as English and Spanish language newspapers and blogs and online magazines. Each A-Z section begins with a short quote related to the drug wars and criminality in Mexico, and in addition to the essays, contains key words such as “Tanks” and where to find them within the encyclopedia (— see “Narcotanques” in this instance). A thematic listing compiled by the reviewer of the 78 entries (non-alphabetical) contained in the work has been provided for SWJ—El Centro readers to better understand its topical coverage:

The book has many positive aspects. The entries are well written and informative with many specifics not readily found in other works. The essays written on Édgar “La Barbie” Valdez Villarreal and the four phases of the Zetas criminal organization from 1997 to the present are exceptionally well done. At the same time, where the encyclopedia falls short is in the exclusion of numerous entries that should have been included within it to truly make it a more comprehensive yet still introductory work. Examples of missing entries can be viewed from the above thematic breakdown. Related to narcotics entries, those on marijuana and fentanyl are missing as well as non-narcotics sources of income—given that the cartels have long ago morphed into polygot criminal organizations—such as human trafficking and extortion. Kingpin entries should also include Ramon Arellano Félix leader of the AFO, Marcos Arturo Beltrán Leyva leader of the BLO, and Nemesio Oseguera Cervantes “El Mencho” leader of the CJNG. Weaponry entries missing are fragmentation hand grenades, rocket propelled grenades (RPGs), and car bomb (anti-personnel targeting) usage that includes the July 2010 Ciudad Juárez incident. Other glaring entries missing include ones on autodefensas (community self defense forces), the wide scale tapping of PEMEX fuel lines and the related gasoline thieves (or huachicoleros) phenomena, ongoing impunity and corruption, Enrique Peña Nieto (past President of Mexico who left office in November 2018), narcocultura (narco culture), and criminal insurgency theory. The absence of entries on La Línea and Cártel de Santa Rosa de Lima (CRSL) is also problematic. It is as if the author spent too much effort on the very large and more detailed entries contained within the work at the expense of those which should have been included even if only in short essay form. It is unknown if the author ran into word count ceilings or delivery date deadlines but such missing essays result in the encyclopedia having an unfinished feel.

An additional downside of the work—not attributed to the author—is the high cost of the hardcover version with no softcover version yet planned. An eBook variant of the work is said to exist but no pricing is provided thus requiring contacting the publisher for more information about costs and how to purchase it. This suggests that the hardcopy encyclopedia version will initially find it’s way only into university libraries and the book collections of specialized researchers and institutions. As a result, it will greatly limit the accessibility of the book.

Where Mexican Cartels: An Encyclopedia of Mexico’s Crime and Drug Wars has a reference use edge is no competing encyclopedia of this type exists. Nothing like it has ever been published before on this subject matter. The cartel expert Dr. George Grayson (a founding El Centro fellow) along with Dr. James Creechan were initially slated to produce this very work as a Praeger Security International imprint but, with Grayson’s passing in 2015, the project languished until picked up by David F. Marley. What was initially meant to be a 420 page work has now been reduced in size to a 337 page one which may partially account for its incompleteness. Thus, while imperfect, this encyclopedia on the Mexican cartels is all that presently exists. It should be celebrated for actually seeing the light of day and those essays contained within valued as well-written sources of information on the cartels and ongoing criminality taking place within Mexico. Hence, it will set the standard as the definitive Mexican cartel encyclopedia until a more comprehensive work is produced.