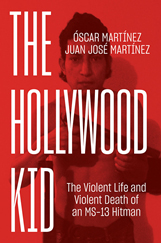 The Hollywood Kid represents a syncretic blend of investigative writing meets ethnography. Based on interviews with Miguel Ángel Tobar, a MS-13 sicario with over fifty kills to his name, ongoing over the course of three years from roughly parts of 2011-2014—the resulting product reads like ‘combat anthropology’ field notes. It chronicles the tragic and brutal life of a gang member in western El Salvador (in the region surrounding the town of Atiquizaya) who is both a victim and a monster—prey and predator—within global capitalism’s fetid underside playing out across Central America. Tobar’s childhood and pre-gang life are highlighted, his entry in the MS-13 mara and rise through the ranks as a senior sicario chronicled, and fall from grace as a police protected witness with the clock ticking on his life with a ‘green light’ (Luz Verde) placed on him by the upper leadership discussed. The sicario’s family life as a husband and father of two young children is also explored as well as his difficulty dealing with the cognitive and moral dissonance this is causing him.

In the process, the work takes us into the world of the Salvadoran underclass existing in a panorama of poverty, ignorance, despair, hopelessness, suicide, criminality, drug and alcohol abuse, and sexual and physical brutality. At the same time, it provides background related to the origins of MS-13 on the streets of Los Angeles (as told from a Salvadoran oral perspective by deported gang members), its later establishment in El Salvador as well as that of its arch rival 18th Street (Barrio 18) with whom it has been at war for decades, and insights into the authoritarian basis of the Salvadoran state. The later includes El Salvador’s civil war and its tradition of low political capacity, which translates into its doing little to nothing for the local underclass which accounts for the majority of its citizenry.

The authors of the work are the brothers Óscar Martínez and Juan José Martínez, an investigative journalist and a sociocultural anthropologist respectively. Óscar Martínez is an award-winning author with works including The Beast: Riding the Rails and Dodging Narcos on the Migrant Trail (2013) and A History of Violence: Living and Dying in Central America (2017). Juan José Martínez (d’Aubuisson) is an academic from the Universidad Nacional de El Salvador, has studied violence and gangs since 2008, and is the author of A Year Inside MS-13 (2019). The translation from Spanish to English by John B. Washington and Daniela Maria Ugaz is smooth and makes the work very readable though some questionable word translations are at times evident.

The work is divided into a preface and four parts—(I) A Violent History, (II) Shacks, (III) Abyss, and (IV) Alive—composed of twenty-five chapters within them. It is a depressing saga focusing on “a scrap of the scraps…of a nobody, of somebody forgotten…” which conveys to us a story more important than of that specific nobody’s life (p. xiii). The book has no index or references and has a habit of time shifting from one era or vignette in Tobar’s life—such as beginning with his funeral—and then taking us to another era for Salvadoran history or even geographically shifting to Los Angeles for MS-13 context. Overall, the book is well priced at $26.95 per the jacket (now $17.99 given its been out awhile) and a good read with a journalistic rather than an academic style.  One nagging component of the work for the reviewer is that the book cover color chosen by the publisher (Verso) is red. This is an “eighthole” (Barrio 18) color in MS-13 lingo as opposed to the traditional blue and white (and sometimes gray and black) of the various cliques, which would be considered an affront to Tobar. Possibly the publisher thought it would provide more sanguine book cover marketing appeal related to the blood on the sicario’s hands or his status as a servant of The Beast.

The focal point of the book never really raises itself above the small town street criminality of a disenfranchised and impoverished Mestizo population indicative of Tobar’s life. This life is based on individual cliques or groupings of them with low-level drug dealing (mostly marijuana), street extortion, theft, and hitman paydays at its core. Glimpses of the exploits of Chepe Furia a higher level MS-13 shot caller from the mid-1990s who organized Tobar’s clique and later moved into larger cross-border marijuana smuggling are, however, provided.  While much of MS-13 politics and actions are secular in nature—including most of Tobar’s hits—and take place within a Christian society, at the street level this represents a fragile moral veneer under which pre-Colombian traditions and maracultura (gang culture) constantly surface though symbolic and barbaric expressions.  The tools of Tobar’s deadly trade are the machete and the hand cannon (what appears to be an improvised firearm) though, at the end of his story, he keeps a M-67 grenade hidden in his small dwelling in order to detonate it if he and his family are ever cornered by his former clique members (see the images at p. 134 and p. 261). Far better a quick death for him and his loved ones (see the image at p. 297) than a drawn out MS-13 torture killing for his entire family.

The symbolic nature of the major gang related transitions in Tobar’s life which include his ‘jumping in’ to the Hollywood Locos Salvatrucha (HLS) on May 3 (Xipe Totec’s day) as El Payaso “The Clown” at age 12, after his machete killing of a local criminal considered to be a witch (Ch. 8: To Kill a Witch; pp. 122-131), and later his renaming as “The Hollywood Kid,” for the ritual torture killing of the MS-13 traitor  “El Horse” (Ch. 14: Here Lies the Hollywood Kid; pp. 183-187), are metaphysical and transformative in nature. These symbolic events go hand-in-hand with the sicario’s belief in blood sacrifice and his grudging embrace of dark spirituality. This is readily evident throughout sections of the book which include instances of torture killing, ongoing references to MS-13 links to Satanism/the Beast, El Salvador’s pre-Christian past, and the living hell that endemic gang warfare represents:

• “They’d [Mara Salvatrucha Stoners] congregate in in cemeteries to invoke ‘the Beast.’ By the end of the 1970s, it wasn’t uncommon to find stoner mareros cutting up cats, making blood pacts, and praying to Satan over the slabs in Pico Union’s public cemeteries.” (p. 13).

• “That’s how the idea of the Beast was born. At first it was lifted from heavy metal titles, like Iron Maiden’s Number of the Beast, but then it took on new meaning. It became synonymous with the gang itself, as well as with the imaginary dwelling space of gang members killed in battle, those who’d been murdered by other gangs. Like the Valhalla of the ancient Vikings, the Beast was a kind of home for warrior souls, And like the Huitzilopoxtli, a sun god of the Mexicas, it thirsted for blood.” (pp. 13-14)

• “Xipe Totec was a popular precolonial deity worshipped from what is today El Salvador to Central Mexico. The legend goes that at the beginning, when the first humans came into the world, Xipe Totec took pity and offered them his own skin for sustenance. This is why corn is associated with renovation [rejuvenation], with the death that gives us life…the priests of Xipe Totec skinned enemy warriors and dressed in their skins as an offering to the generous god who had given food to their ancestors. The bloody side of the skin faced out, and the hands, still connected by strings of flesh, hung loosely from the priest’s wrists.” (p. 130).

• “…so every May 3, as El Salvador prays to the Christian cross and venerates the sacrifice of the Christian God, at the same time we are venerating another god who also offered his skin to save our ancestors. Xipe Totec, Our Lord the Flayed.” (p. 131)

• “They put tourniquets on El Horse’s arms and legs. It’s amazing what young gang members know about human anatomy when it comes to torture. They hacked off his arms. They hacked off his legs. It’s called the vest cut. But the Beast wanted more…They cut out his tongue…They gouged out his eyes…The Clown slowly slid in his machete, carefully feeling the heart beating through the blade. He slid it further in. A clean cut above the abdomen. He pulled out the machete and slipped in his hand. His fingers curled over the weak, fragile heart.” (pp. 186-187).

• “…the path to the Truth, ‘is a bitch. The Mara was the beginning, we brought with us the name of the Devil, Satan, all of us marked by the MS-13 are marked by the Devil. We’re souls delivering over other souls, all of us tangled in the same knot.’  Pursuing the eightholes [Barrio 18] is an end without end. That’s gang warfare. It’ll never end” (p. 190).

In juxtaposition, after his demise, he is given a Christian evangelical funeral by his young wife (see the image at p. 5). This is, however, followed by a botched five-minute burial at a local cemetery reserved for his gang, wrecked by threatening members from his former clique (pp. 3-5). Tobar’s remains ultimately lay in an unmarked grave that is reused for a later burial with the new remains buried on top of him. The cemetery itself is covered with the gang’s graffiti including, befittingly, “a solitary black claw drawn on the wall…an ‘MS’ with the horns and the initials of the clique, HLS; the words ‘see, hear, and keep quite’ scrawled on another wall; other gang signs and letters marking the tombstones” (p. 303).  With this, the remains of Miguel Ángel Tobar—“The Clown,” “The Hollywood Kid,” the MS-13 sicario and reaper of souls—rot into nothingness while constantly being taunted by The Beast for paying the price for being a rat, a snitch.

In summation, The Hollywood Kid, from a Salvadoran street and oral perspective, independently supports the MS-13 linkages to dark spirituality and occult rituals that we have been tracking at SWJ-El Centro. Here, in Atiquizaya, El Salvador ending in November 2014 at the street sicario level, it is not Santa Muerte veneration or worship that is evident in Miguel Ángel Tobar’s life, but rather Satanic and Xipe Totec (the Flayed God) narratives that are given greater weight by Óscar Martínez and Juan José Martínez in their ethnographic analysis. As we have viewed in other works related to narco and gang sicarios, those deeply involved in the trade appear to have an increasing association with death-linked saints and deities—both modern and in some instances pre-Colombian in their origins. This work clearly supports this proposition.