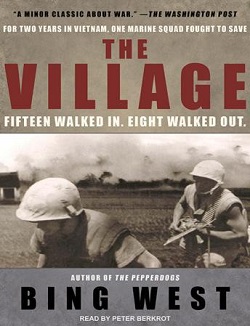 Let’s just forget the Vietnam War ever happened.  For thirty years following the last Huey helicopter flying off the rooftop of the U.S. embassy in Saigon that’s exactly what the U.S. military tried to do.   We had lost for the first time, and it hurt.  Service members coming home from the war were spat on, ridiculed, and looked down upon, and it hurt.  It hurt so much that senior leaders let the military become hollow and weak, turning a blind eye to misconduct and sinking unit morale.  They vowed to never fight another war like that and stripped the lessons of Vietnam out of the lexicon of U.S. combat operations.

This was the world that The Village by Bing West was born into, a world that wanted to erase the Vietnam War from its memory as soon as possible.   Despite the fact that the book was beautify written, more like a novel then then a dry dusty history book, the environment it was published into caused the book to not be very well received.  But as James Schlesinger, the presiding Secretary of Defense at the end of the war, prophetically told West in the early 1970’s and stated in the forward to the 1985 reissue, “your book will eventually receive its just due”.  He was a little off in his prediction, Schlesinger thought it would only take about ten years, but the book did eventually gain popularity.  This can be attributed to two things, first it’s inclusion in the Marine Corps Commandant’s reading list, and second the United States found itself fighting in two wars that felt, from a tactical standpoint at least, very similar to Vietnam.

As the type of fighting in Iraq and Afghanistan began to resemble what was experienced in Vietnam and the population was seen more and more as the center of gravity in that fight, leaders started to look for lessons and examples of how to conduct themselves in that type of environment.  Books like LTC(R) John Nagl’s Learning to Eat Soup with a Knife and David Galula’s Counter-Insurgency Warfare Theory and Practice became required reading for commanders preparing to deploy.  While these books are great deep thought exercises on the concepts of counter insurgency they lacked the feel, emotion and tactical level lessons of what it’s actually like to live through a counter insurgency.  This is the void that The Village fills.

The Village draws you into the world of a small unit, a unit roughly equivalent to a rifle squad, as it struggles to secure a small village near the Vietnam Demilitarized Zone, work with local security forces, and gain the trust of the population all with little to no help from higher echelons.  West’s novel like prose puts the reader in the action for each patrol, ambush and tragic loss.

The four examples above are just a few of the many lessons littered throughout the book.  It is no wonder that in the environment of today’s conflicts, The Village would be on the Marine Corps Commandant’s Read List.  This book is a must read for anyone preparing to deploy to a counter insurgency environment, or anyone who is interested in a unique and little talked about aspect of the Vietnam War.

The views expressed in this article do not reflect those of the US Government, DoD, or US Army.

Lieutenant Colonel James King is a US Army Intelligence Officer.  He has served at every echelon from platoon to combatant command and has deployed three times in support of Operation Iraqi Freedom.  He has written several articles for Small Wars Journal on a wide range of subjects.  Lieutenant Colonel King holds a bachelor of arts in sociology from the University of Washington and a master’s degree in strategic intelligence from American Military University.