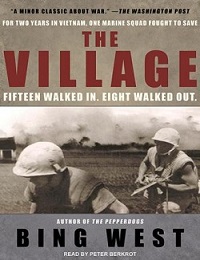 Some may be surprised that a publication such as Small Wars Journal is interested in Vietnam. After all, there were all those massed B-52 strikes, the multi-division sweeps so favored by General Westmoreland, and at the high-water mark more than a half million U.S. troops on the ground. But Vietnam was a kaleidoscope, or a montage, not one war but many different wars at different times and in different places. The war any one participant saw was very much a function of when and where he served.

Bing West gives us, in this timeless work, an incomparable portrait of the lower end of the spectrum, a small war indeed. The Marines, chronicled by Marine Captain Bing West in a RAND report, all volunteers, were given one simple order—control the five square miles of the village of Binh Nghia, day and night, and do it with rifles, not artillery or airpower. The costs were high.

Beginning in early June 1966, and continuing for some sixteen months, these Marines from Company C, 1st Battalion, 7th Marines gave it everything they had. West led many of the patrols and ambushes that characterized the combat actions of his small unit and their Vietnamese counterparts, but in this account modestly tells the story as an all-seeing observer. The result is a gripping and authentic portrait of an extraordinary mission.

Gaining the trust and confidence of the villagers was a first order of business, one made more difficult by language barriers and cultural differences. Operating alongside the part-time soldiers of the South Vietnamese Popular Forces, at that stage of the war essentially untrained and woefully under armed, the Marines put some starch into the enterprise. Later West comments proudly that not one PF ever deserted from the combined unit.

By mid-July, reports West with well-deserved satisfaction, only weeks after the Marines first went to Binh Nghia, it was known as the scene of more night action than any other village in I Corps, in turn described as the most violent area in Vietnam. This was being achieved by a force whose combined strength, Marines and Popular Forces, numbered 35 in a village of 6,000.

West’s powers of description are amazing. He portrays the excruciatingly minute movements of riflemen creeping into ambush position, one step a minute constituting good time, or slurping through deep mud, or listening intently to gain intelligence from the croaking of frogs, or trying to kill mosquitoes without slapping noises, or the pain of an immobile body on an unyielding surface, in telling detail.

By the time the Americans had been in the village for close to a hundred days they had conducted more than 400 patrols and had fired or been fired upon over 200 times. All had lost weight, and all were desperate for sleep. But they endured.

The Americans liked the village, says West. And, “for perhaps the only time in the lives of those dozen Americans, seven of whom had not graduated from high school, they were providing at the obvious risk of death a service of protection. This had won them open admiration and stature within the Vietnamese village society in which they were working and where ultimately most of them would die.”

West acknowledges the radically different views of the nature of the war and how it should be fought on the part of General William Westmoreland, then commanding all U.S. forces in Vietnam, and the senior Marine leadership. “Under severe criticism from the Army [read Westmoreland] for wasting manpower in Combined Action Platoons, the Marine command wished to clearly demonstrate the wisdom of combined units,” he writes. “This they were never to do to their own satisfaction, much less that of the U.S. Army. The combined units seemed too fragile, the American role too temporary, other demands for U.S. manpower too powerful.”

Interestingly enough, the Marines at Binh Nghia were visited in September 1966 by General Harold K. Johnson, then Army Chief of Staff and sponsor of a study that was devastatingly critical of the Westmoreland approach to conduct of the war.

“PROVN contends,” read the study’s foreword, “that people…constitute both the strategic determinants of today’s conflict and ‘the object…which lies beyond’ this war.” Thus: “The critical actions are those that occur at the village, the district and provincial levels. This is where the war must be fought; this is where the war, and the object which lies beyond the war, must be won.” And: “At no time should…combat operations shift the American focus of support from the true point of decision in Vietnam—the villages.”

Much would change when in mid-1968 General Creighton Abrams took command of U.S. forces and brought to bear that understanding of the nature of the war and how it should be fought.

In 1969 and after, with the Marines gone from Binh Nghia but the war continuing, West and his friend Charles Benoit visited the village. Things had changed, and not for the worse. Elements of the People’s Self-Defense Force—women and children and men too old for regular military service, organized and armed by President Thieu—were now functioning effectively. The PF—Popular Forces—with whom the Marines had patrolled and ambushed, were now “special,” said West, “reserved for the most difficult missions.” An effective intelligence net and a diminished enemy threat made for “relative peace.” Of course, that hard-won outcome would be thrown away when after withdrawing all its forces the United States dishonorably abandoned its ill-fated South Vietnamese sometime-ally.

Once more, in 2002, West and Benoit went back to Binh Nghia—by then renamed Binh Chuc, “Just Peace,” in place of “Just Cause.” West’s moving account is included in the paperback edition of The Village published in 2003. It is impossible to read without tears, at least for anyone who cared about these villagers and their long-ago Marine protectors. The bronze plaque that once identified Fort Page, honoring the first Marine killed there in June 1966, is gone. But many villagers remember “their” Marines. “They paid hard sacrifice,” acknowledges one. Says another to West, “You old now, dai uy.”

Ironically the distance from Binh Nghia to My Lai, where American soldiers had wantonly slaughtered several hundred defenseless and innocent women, children, and old men, a massacre their miserable commanders then tried to cover up, is just four miles. West and Benoit visited there, too, finding in the contrast between its cemetery-like atmosphere and the vibrancy of the former Binh Nghia reminders of the worst and some of the best of what Americans did in that war.

Most Americans who served in Vietnam came home to indifference at best, more often hostility, from the nation that sent them there. But most who served there are also proud of that service, and of those with whom they served, remembered in hundreds of annual unit reunions held even these many years later. Among the best were that small group of Marines who volunteered to serve in Binh Nghia, wonderfully chronicled and forever celebrated in this powerful and heart-breaking book.

Lewis Sorley is a Vietnam veteran and author of A Better War and biographies of Generals Creighton Abrams, Harold K. Johnson and William Westmoreland.