SWJ Book Review – “The Sword and the Shield: The Mitrokhin Archive and the Secret History of the KGB”

SWJ Book Review – “The Sword and the Shield: The Mitrokhin Archive and the Secret History of the KGB” 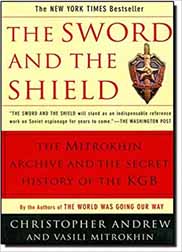 Perhaps the most feared nightmare of every intelligence service is a leak by one of its own. For Russia this nightmare became a reality the day a retired KGB major entered a British embassy in a capital of one of the Baltic states intending to provide the British secret service with the top-secret Soviet intelligence files.

Christopher Andrew, the author of the book, The Sword and The Shield: The Mitrokhin Archive and The Secret History of the KGB, provides a fascinating account of the history of the Soviet secret service. The book is based on classified information from the archive of the KGB´s First Chief Directorate that was responsible for its foreign operations and intelligence activities. Andrew, who is currently an Emeritus Professor of Modern and Contemporary History at the University of Cambridge, wrote the book in cooperation with the person that provided the British Secret Intelligence Service (better known as SIS or MI6) with the archive. In 1992, Vasili Mitrokhin, a former KGB member and archivist of the First Chief Directorate, left Russia along with his family and six cases of top-secret documents. Besides the immense importance of these documents, Mitrokhin´s story itself is worthy of a film.

Vasili Nikitich Mitrokhin, born in central Russia in 1922, joined Soviet intelligence in 1948 as an operations officer. After moving from operations to become an archivist, his disenchantment with the Soviet system increased. These feelings were strengthened via his access to classified information on Soviet operations against the Soviet citizens like writer Boris Pasternak, the author of the famous novel Doctor Zhivago. For that novel, Pasternak was awarded Nobel Prize for literature in 1958. Mitrokhin became outraged when the newspaper of the Soviet Writers´ Union, the Literaturnaya Gazzeta, called Pasternak “a literary Judas who betrayed his people for thirty pieces of silver – the Nobel Prize.ˮ He even wrote an anonymous letter of protest to the editors of the Literaturnaya Gazzeta. Mitrokhin also enriched his horizons by listening to banned Western radiobroadcasting like BBC World Service and Radio Liberty. After the invasion of Czechoslovakia by the Warsaw Pact in 1968, Mitrokhin concluded that the Soviet system could not be reformed.

During the following years, Mitrokhin read publications by Soviet dissidents living abroad - like the Chronicle of Current Events, a samizdat journal first published in 1968. With his increasing antipathy towards, as he called it, the “three-headed hydra: the Communist Party, the privileged nomenklatura and the KGB,ˮ an idea to create his own classified samizdat gradually forms in Mitrokhin´s mind. He is given a chance in 1972 when the FCD is relocated from the infamous Lubyanka to a new building in Moscow´s Yasenovo. During the following ten years, Mitrokhin fulfils the task to transfer the whole FCD archive to the new premises. While doing so, he writes notes on wastepaper which he subsequently smuggles to his apartment in Moscow. On weekends, Mitrokhin rewrites the notes, puts them in a milk-churn, and buries them on his dacha outside of Moscow. He retires in 1984.

The author´s thorough acquaintance with the Mitrokhin archive helped him to tell the story of people who committed themselves to protect the first worker-peasant state at any cost, even against their own people. The book describes the history of the Soviet intelligence from the period of the revolutionary terror and the creation of Cheka, the first Soviet secret police, through the horrors of Stalin´s Great Purge and the Great Patriotic War, to the Cold War and the final collapse of the Soviet Union. The conclusion of the book is devoted to the role of intelligence in post-Soviet Russia up to the outset of Putin´s presidency. The KGB story reveals the ridiculousness of a system that saw enemies around every corner as well as the immense price paid by the citizens of the former Soviet Union and its satellites.

At first glance, the book does not come with any breakthrough historical revelation. The Cheka´s terror against real or alleged counterrevolutionaries or the millions of victims of Stalin´s reign are thoroughly documented. The same applies to Stalin´s knowledge of the Manhattan Project and his insurmountable distrust and fear of the Allies and their democracies. The reader will not be surprised how the Soviets mercilessly suppressed the “bourgeois elements” in Nagy´s Hungary or Dubček´s Czechoslovakia.  The oppression of Soviet citizens and the relentless effort to retain the “ideological purity” of the Soviet society at all costs are well-known. However, what makes Andrew´s work exceptional is the detailed description of Soviet intelligence operations since the Bolshevik revolution to the dissolution of the Soviet Union. The book describes the extent of Soviet penetration of Western intelligence agencies and how the Soviet Politburo´s paranoia often led to the distortion of the intelligence gained.

The book will indeed attract many history fans due to the detailed account of key historical events, taken from the perspective of a secret intelligence service of one of the superpowers of the twentieth century. Additionally, Andrew´s work will certainly serve as an excellent source of information for students at civil and military academies who study the history of political warfare and subversive actions.

Captain Dusan Gregor of the Armed Forces of the Slovak Republic is currently a candidate for an M.S. degree in Defense Analysis at the Naval Postgraduate School, Monterey, California.